‘I embody Ireland when I play the harp’

Harpists have had mixed fortunes since their early medieval heyday. Now Cormac de Barra is helping to restore the instrument’s status. As part of his efforts, he tries teaching it to an ‘Irish Times’ journalist

After a week of learning to play the harp, Patrick Freyne performs for Irish trad music legend Cormac De Barra. The pair talk about the harp in the days of Brian Boru. Video: Kathleen Harris 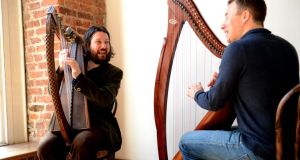 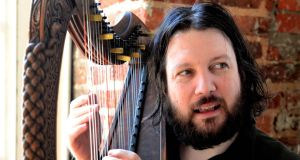 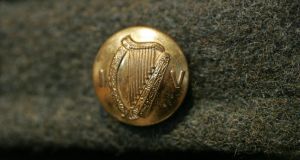 The harp as national symbol: on a military uniform. Photograph: Frank Miller 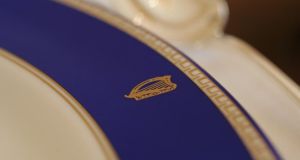 The harp as national symbol: on a dinner plate at Áras an Uachtaráin. Photograph: Frank Miller

Once upon a time, says Cormac de Barra, the harpist was given pride of place in Irish society. De Barra is collaborating with Moya Brennan on Ten14 , a musical Brian Boru-themed show for all the family, which debuts today in the Ark in Dublin’s Temple Bar, and he’s offered to teach me how to play a tune on the harp.

“In those days the taoiseach got the best cut of meat,” he says. “The poet got the second best cut and the harpist got the third. And so it went, all the way down to the professional farters who got the giblets and guts.”

“Professional farting?” I say. “Was that a thing?”

“Can you teach me that too?”

“No,” says de Barra, he shakes his head sadly and then laughs. Professional farting is, like so much else, a lost art. (Online, I find a reference to an academic essay entitled “Rectal Music in Gaelic Ireland”.)

The harp – which was present in many ancient cultures – has been a symbol of Ireland for centuries, says de Barra. There are harps carved on high crosses and when Henry VIII claimed dominion over Ireland, he minted coins with the crown sitting on the harp “to represent his subjugation of the country”.

But the heyday of the Irish harp ended with the Flight of the Earls in 1607, after which the formerly cosseted harpers lost their homes and their patrons and began to wander, like the blind composer and satirist Turlough O’Carolan.

“O’Carolan was the last of the big harper, composer bards,” says de Barra. “Nobody after him made such an impact. He would have been playing in the big houses of whoever would have him. Other harpers may have written better tunes than O’Carolan but those are lost or went into the repertoire of the pipes and fiddle and mutated from airs to dance tunes.”

In 1792, says de Barra, there was a harp festival in Belfast. “There was a national callout to harpists and only 11 people, 10 from Ireland and one from Wales, came. One was a woman called Rose Mooney. Another was a very old man called Denis Hempson who lived to see three centuries [it seems he lived from 1695 until 1807].”

Hempson was already grumbling that the old style was lost. “By the 1820s and 1830s, when those harpers were all dead, the tradition had died away,” says de Barra. “Then the Famine killed off any memories of the harp. It was one of the minor casualties of the Famine, in fairness, but the famine destroyed any living memory and broke the line entirely.”

The Irish harp was reanimated with the Gaelic Revival in the 1890s but nobody is quite sure how authentic the newer techniques are. “I said before that it’s like trying to rebuild a Georgian house with a pile of bricks and a sketch of the house, with no one knowing or remembering where each brick went,” says de Barra.

Still, he grew up with this instrument. His mother played it as did his grandmother Róisín Ní Shé who played it on the Irish language children’s programme Dil ín Ó Deamhas . The ornate harp she played is in de Barra’s living room. “One of my first ever memories is hiding behind that thing and Mary O’Hara coming to visit my grandmother to learn a song from her,” he says.

And now I’m learning a song from de Barra. He positions me at the harp, my left hand poised to pluck out bass-notes and chords, the right ready to pluck the higher strings.

The show he has cocreated is a musical celebration of the Battle of Clontarf and the story of Brian Boru. De Barra is going to teach me the traditional tune, Brian Boru’s March .

He shows me how to pluck out the melody. When I’ve got that, he shows me how to accompany myself with the underlying chords. It has the linear logic of piano, with left hand used to play the bassier notes and right hand for treble (the lost Irish harp tradition was apparently the other way around).

I play too fast initially, but de Barra encourages me to slow down and get my fingers out of the way of the tune. Unlike say, the trumpet, which I’ve also tried to learn, the harp sounds sweet even when played badly.

And it looks amazing. De Barra lends me a beautifully carved wooden harp, made in the 1930s in Glasgow and modelled on the one that featured on the Irish penny. It was once owned by the actor and balladeer Christopher Casson.

When I play it later that night at home, my wife is impressed . . . by the harp, not by my playing. “It’s sort of magical,” she says, running her hand down the curved edges. “As if you when you played the right tune something mystical might happen.”

“I feel like I embody Ireland when I play it,” I admit, plucking out a strident, not quite melodious version of the song I’ve learned. “ Mise É ire ,” I say, and try to look noble. Then she has a go and tries to look noble.

It’s strange that our national symbol is an instrument that was out of use for so long. There is now, says de Barra, a revival of harp playing in Ireland, largely led by traditional musicians who have taken it up as a second instrument.

“There was an embryonic revival of harp playing in the 1960s and 1970s,” he says, “but it was always a bit laughed at. It was ‘Sit in the corner and play your sweet little chords’.”

Indeed, Comhaltas, the body charged with promoting traditional music, was reluctant to include the harp on its list of approved instruments for some time. “But people played it,” says de Barra. “My mother was one. Moya Brennan was another. And there’s a whole new generation turning to it now.”

Still, I may be better than Brian Boru was. Despite the fact that the 14th-century harp in Trinity College named after him, Brian Boru may not have played the instrument at all. “I know!” says de Barra. He is good-humouredly exasperated by this inconvenient historic fact, given that he’s been composing harp music about the man.

“Here’s the thing,” says de Barra. “We decided we were going to do all the folklore around Brian Boru that you couldn’t disprove and then all the facts that we know, but that we wouldn’t go near the stuff that was purely myth.

“It’s said he played the harp right before he got killed at Clontarf, but there’s absolutely no mention anywhere about him playing the harp in any of the annals . . . I suppose nobody wanted the truth to get in the way of a good story.”

“I won’t tell anyone if you don’t,” I say. Then I play a sequence of harp notes to indicate it was all a dream.


Ten14 is on today and on Monday at 2pm and 4pm at the Ark, Temple Bar, Dublin, and will tour nationwide