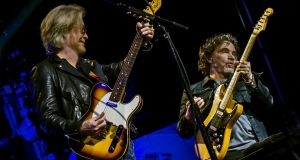 What is Meduza when it’s at home, you might ask. Well, Meduza is a three-piece production team from Milan, consisting of Mattia, Luca and Simone, and they’re partly responsible for Piece of your Heart, a house-R&B collaboration with Goodboys that’s fast becoming one of the songs of the summer. On their Spotify, they have multiple remixes of Piece of your Heart and one other song. Safe to say there’s an air of mystery around them but people have certainly done less with one-hit wonders. LB

Like an old-school foreign exchange, Telephones are partnering with Lisbon’s Nova Batida festival for their daytime into night party and, in return, Telephones will play with them in September in Portugal. Their Dublin party will see them take over Pallas Projects with music from Papa Lou, Rosita Moulin and more. Come 10pm, the party will move to Tengu Yamamori where Harrison BDP and Lee Kelly will provide the tunes. Expect music of the house, disco, soul and Brazilian persuasion. LB

Emma Langford is a treasure in Ireland’s music scene. The singer-songwriter from Limerick creates music that is built on folk but draws influence from jazz while incorporating pop melodies and relatable and poetic lyrics into each song. Tony Clayton-Lea described her debut 2017 album Quiet Giant as “an enduring piece of work” for this paper, so have a listen, yeah? She will also be performing at the Claremorris Folk Festival on July 20th and at Knockanstockan on July 21st. LB

With Fuinneamh festival making its return to Bellurgan Park in Co Louth on September 14th, there’s no better way to make that announcement than with a party. Cailín and Aeron closed the Index Arena at last year’s festival and with their notorious chemistry playing back to back, they’re running the show in Index from 10.30pm until close with techno and house music galore. The Index Stage line-up will be announced soon but, for now, tickets for this event are going for a fiver. LB

Live at the Marquee, Cork, ticketmaster.ie

Now in their early 70s, Daryl Hall and John Oates are the epitome of commitment to the cause. The duo released their debut album (Whole Oats) in 1972 and continued releasing records every year until 1982. In that productive 10-year period, they cornered the market in what the media described as blue-eyed soul. Less successful in the UK than the US (where they had more than 30 chart hits on the Billboard Hot 100; in 2016, the duo’s national profile was recognised with a star on the Hollywood Walk of Fame), their best-known songs have provided them with a crowd-friendly setlist as well as a certified pension fund. More power to them, etc. TCL

Visits to Ireland by Stevie Wonder are rare enough (he was last here in the summer of 2010 when he played the then O2 venue), so you can depend on a surge of interest from a widely spread demographic that will surely include fans of his Tamla Motown hit singles (My Cherie Amour, among many others) and landmark albums (Songs in the Key of Life). Like many a heritage act, Wonder hasn’t done much of note in recent years, but that won’t unduly bother ticket holders – Wonder is a remnant of a different era of pop music, when hit songwriters were under contract, and when songs were written to order – effortlessly and with no small amount of sass. We are managing our expectations, but, sure, fingers crossed it’ll be a sizzler. TCL

Last November, Atlanta artist Mattiel Brown played The Grand Social to a pretty delighted crowd and if you missed her then, now is your chance to play catch-up. An ad designer and illustrator by day, she plays the swaggering rock star by night. Even though her debut self-titled album, which is chockablock with cowboy anthems, was only released last year, her second album Satis Factory is freshly released into the world and it injects extra doses of blues into the ’70s alt-rock palette she masters so well. LB

Rochester, New York native Mikaela Davis knows her way around a harp, her instrument of choice that shoehorned her into performing in youth orchestras instead of garage bands. Yet despite being used to performing in recitals and the like, Davis and her harp have taken a different route to success. So far, her public profile has amounted to supporting the likes of Punch Brothers, The Staves, and Bon Iver, but the arrival of her first album, Delivery, signals a new approach. These dates constitute her debut headline tour of Ireland – best of luck carting around the harp! TCL

This punk/hardcore band from Bristol are experiencing interesting levels of success – it is rare enough that music of such muscularity transfers beyond a certain fanbase, but there’s something going on here that hadn’t initially been envisaged: an organic community has developed around Idles, notably around the band’s degree of, as the band’s Belfast-based guitarist, Mark Bowen, said to this writer a few weeks ago, wanting their fans to “share how they’re feeling, to feel safe in doing so, and not to think they’re being reprimanded, scorned or ignored”. Special guests for what is certain to be the loudest show the venerable Iveagh Gardens has hosted are Australia’s Rolling Blackouts Coastal Fever, and Dublin band, The Claque. TCL

If there’s one man who can diffuse the line between performer and audience member, it’s Dan Deacon. The American electronic composer likes to turn his live sets into a communal event where your interactions contribute to his onstage energy. While playing music, he directs you to spin in circles, split into teams and compete through the means of interpretive dance or dish out as many high-fives as possible. This is a show that runs on joy and it’s very much a tonic for all that ails you. LB

Ten years ago, any level of success for Conor O’Brien – the village genius – might have seemed presumptuous. Yet here we are, four studio albums down the line, and O’Brien has been lauded left, right and centre for his songwriting, the pinnacle of which was surely when he won the Ivor Novello Award (Best Song Musically and Lyrically) for the title track of his 2010 debut album, Becoming a Jackal. With those four albums now under his belt, more recent Villagers’ shows have been a joy from start to end, so expect more of the same here (as well as, we hope, O’Brien’s spine-tingling version of The Wonder of You, as recently heard on HBO’s Big Little Lies). Special guest is Aldous Harding. Villagers also perform at Galway International Arts Festival, Thursday, July 18th. TCL

MOTZ is an Irish hard and deep techno collective that write online magazines (technomotz.com), oversee a record label and run events at which they DJ. This gig is the collective’s Dublin debut, and features the kind of serrated throbs and pulses that co-founding member Niamh O’Connor has described as “banging techno, proper up-your-arse stuff¨ . . . we represent that energy wherever we go – a rowdy, unpretentious party vibe”. Guests on the night include Scottish techno duo Liam Robertson and Calum Macleod, aka Clouds, whose concept techno album, Heavy the Eclipse, has radically increased their profile. Irish and Scots in the same venue? Take cover. TCL

Fully seated shows. No support. Just Joan on her own. There have been many people waiting for this kind of tour, wherein American songwriter Joan Wasserman takes stock of her back catalogue and ruffles through her work from 2006 debut album, Real Life, to last year’s Damned Devotion. Such a broad display of catalogue wealth is all down to the recent anthology release, Joanthology, which has rightly been collecting plaudits, including from this publication, which reviewed the collection a couple of months ago (“a musician determined not to repeat herself”). TCL

The way the adverts have it, it’s as if these two old pals in disharmony will be sharing the stage for a few songs. We’re not holding out too much hope for that – these are two highly singular performers, each with their own set of rules of engagement devised through the decades – but I suppose you never can tell. Young (73) is more prone to sticking to playing some of his best-known songs in a way that people recognise and is currently enjoying a particularly prolific original songwriting period. Dylan (78) will play his better-known songs any way he damn well wants; his previous three albums (2017’s Triplicate, 2016’s Fallen Angels, 2015’s Shadows in the Night) are all covers. Special guest is Glen Hansard. TCL