How David Liebman got the keys to the jazz kingdom

As a teenager, Liebman saw Coltrane play and was hooked. More than 50 years on, the saxophonist and jazz evangelist can’t believe that he rose to fill the shoes of his idol 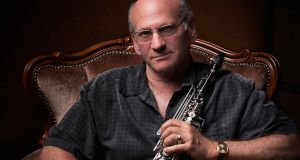 David Liebman: “I’m good but I’m not that good. I don’t know how this happened to me. I still pinch myself daily”

‘As far as I’m concerned,” says Dave Liebman in a Noo Yawk accent straight out of an old gangster movie, “when you’ve got that horn in your mouth, when you’re playing with three or four other guys, and everybody’s on the same page, and the magical voodoo shit is happening, for those five minutes you’re king of the world. It’s better than sex, better than any kind of power.”

Liebman’s jazz epiphany came early. He was born in Brooklyn in 1946 and was 15 when he saw saxophonist John Coltrane play live.

“It was February of 1962 at the original Birdland club near 52nd Street,” says Liebman, displaying no trace of impatience with a story he must have told a thousand times before. “I had been playing saxophone about three years and didn’t really know much about jazz, and of course how it was when you walked into the club.

“I had never seen anything like it: the girls with the cigarettes round their neck, the photographers with those flashbulbs trying to sell you a picture of you and your lady. And then, at the back, you had what they called the peanut gallery, 10 or 12 seats reserved for those of us who were underage.”

Liebman’s life changed when Coltrane took the stage and began to play My Favourite Things.

“It made me realise that there is more to life than meets the eye. I was a very meat- and-potatoes kind of guy, but Coltrane was incredibly energetic, passionate and right to the point, and if you were sat basically a 100ft away from it, you’d have to be brain-dead not to get the point.”

The seed planted that night would lead the suburban Jewish kid to the very heart of the New York jazz scene, to touring and recording with Coltrane drummer Elvin Jones and eventually to filling his idol’s shoes in Miles Davis’s group.

In the late 1960s Liebman graduated from New York University with a degree in American history. He moved out of Brooklyn and became part of the burgeoning loft scene in downtown Manhattan. From this hot house , a new generation of jazz musicians would emerge.

“We were really cutting our teeth,” he says. “We were playing mostly free jazz, at least in my milieu, with Mike and Randy Brecker, Lenny White, Bob Moses. We loved Ascension, Coltrane’s crazy, chaotic, amazing free jazz record from 1966, and that’s how we were playing, for hours and hours.

“We had a little fuel and ammunition obviously, and that’s the way it was. You could go down to Chinatown at three in the morning and have a little soup and rice, and then go back to the loft, sleep for a few hours, and then get up and go again.”

The loft on West 19th street was also home to two members of the Miles Davis group, which was in the process of turning acoustic jazz on its head.

“I was on the third floor, and Dave Holland was below me, and then Chick [Corea] moved in to the first floor,” Liebman says. “We were doing macrobiotics, doing all kinds of drugs, doing yoga – it was our laboratory. Actually, Miles came over for dinner one night. And, you know, they cooked macrobiotic rice for him, and I was there, I sat with him, so I had met Miles before I played with him.”

During this period the young saxophonist discovered a talent for making things happen. Realising that they needed to start playing in public, Liebman and a group of contemporaries, which included many of the music’s future stars, founded an organisation called Free Life Communication. “And I said, ‘Look, I’m good at this, I’ll take care of business.’ ”

It’s a phrase that any musician who has studied with the saxophonist knows well.

“Yeah,” he says with a wry smile, “that’s what I do. You got to make phone calls, and you’ve got to unite people under a cause. And, you know, the truth is that by the late 1980s, when I started the International Association of Schools of Jazz, of which Newpark is a founding member [see panel, right], that’s me doing the same thing.”

Bringing people together and teaching them how to play jazz has arguably been as important as performing for Liebman.

“Teaching is an art form in itself,” he says. “You’re handing somebody the keys to the kingdom. Whether they like it, take it or do it – that’s another matter. This message is not for everybody. The love of music a lot of people have. The love of jazz fewer have, but still some people like it. But the idea that this is something even beyond music is not something that is recognised by many people.”

If he were to hang up his soprano saxophone tomorrow, Liebman’s place as one of the post-Coltrane greats would be secure. Alongside the New York machismo and the charisma of a born leader is a modesty and a generosity of spirit. And half a century after that night at Birdland, he still seems amazed that he rose to fill the shoes of his idol.

“Look, I can’t tell you how much luck I’ve had,” he says. “I mean, I’m good but I’m not that good. I don’t know how this happened to me. I still pinch myself daily. If I think about it, that I was in those shoes, I still can’t really believe it.”

THE IRISH SCENE: DAVE IN DUBLIN

David Liebman has been a visiting professor at Dublin’s Newpark Music Centre since the late 1980s, when a group of Irish musicians led by Ronan Guilfoyle began to offer improvisation classes to Ireland’s budding jazz musicians. Since then, Newpark has grown into a third-level institution with an international reputation.

The school is a founding member of the International Association of Jazz Schools, which is spearheaded by Liebman. Newpark also serves as an official feeder school for the Berklee College of Music in Boston.

This year Newpark celebrates the 10th anniversary of its BA in jazz performance, Ireland’s first such full-time degree course. More than half of the current student body are foreign musicians. Many graduates stay on to become part of Dublin’s growing jazz scene.

To mark the occasion, Liebman will be in Dublin for two days of music, including a talk on his life, a public ensemble masterclass at the National Concert Hall, and a trio concert with Guilfoyle and American drummer Gerry Hemingway at Whelan’s on Wexford Street, Dublin, all on January 31st.

Then, on February 1st, Liebman will be in the Sugar Club for Newpark 10, an evening of music with faculty, students and special guests.