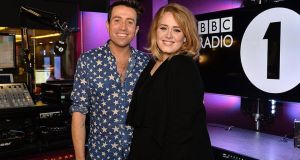 Adele with presenter Nick Grimshaw at BBC Radio 1 where she was promoting her new single Hello from the album, 25. photograph: @R1breakfast/BBC/PA Wire

In one week Adele has set a new record in musical sales, made flip-phone users feel good about themselves and given Lionel Richie the opportunity to tweet “Hello Adele, is it me you’re looking for?”

There have also been celebrity endorsements, rave press reviews and parody videos aplenty of her new single, Hello. All for four minutes and 55 seconds of music.

The video for the song is shot in sepia tones and features the singer on a now-retro flip-phone, rather than a touch-screen device.

Adele might also be responsible for the destruction of a few personal relationships. The singer’s new power ballad has prompted many a person to imitate the song’s character, by reaching out to an ex and asking, as she does in the song: “I was wondering if after all these years you’d like to meet up?”

Pop songs can provoke novelty dance crazes, raise awareness of illness and natural disasters and even call for political action and regime changes. But mostly they simply serve to console or inspire the listener. They don’t often make us pick up the phone to our old lovers.

But for the past week a new trend has become apparent on social media: people confessing that the song has moved them to contact their exes. “Adele’s new song makes me want to call up my ex and say sorry”; “After hearing the song I immediately texted my ex”; “Adele has empowered me to get in touch with the person who broke my heart” read some of the tweets about the song’s effect.

Then came the joke responses: “The song has made me want to phone my ex – even though I don’t have an ex” and “Just listened to Adele’s new song so if anyone needs me I’ll be on my ex-boyfriend’s doorstep in the foetal position”.

As the week progressed, moral guardians started to proffer advice: “Just because Adele is phoning her ex doesn’t mean you should. Don’t do it. Be strong”; “Please don’t drunk text your ex after hearing the Adele song” and “You really should delete your ex’s number before watching the Adele video”.

Then came a series of cloying online news articles about “buried feelings resurfacing”, “closure” and “revisiting your emotional past” in the wake of the song’s release.

It’s just a surprise that Hello didn’t carry a government health warning advising of the adverse effects of mixing alcohol with Adele songs.

Adele’s lovelorn ballads, played out over plaintive minor chords with lyrics of remembrance and regret have, like Abba before her, that genius quality of appearing cheap and simple but in reality containing unvarnished universal truths about our emotional lives.

My advice? Don’t forget why that person became your ex in the first place. Pick up that phone and text your ex to say: “Adele’s Hello reminded me of the time you shouted at me in a New York bar at 4am and other hurtful episodes”. To take an example at random.