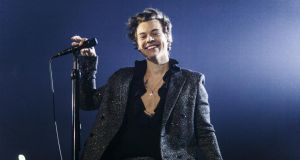 At the heart of the new is collaboration; it sparks different thoughts, engenders adventure, removes the comfort-zone cloak. Sometimes, it doesn’t work, but more often than not it seizes the mutual transference and connection of ideas, packages them together, and presents them to an open-minded audience. One such collaboration is this: indie artist Katie Kim (“darkened corners and icy atmospheres” – The Last Mixed Tape) and Lankum’s Radie Peat (“haunting vocal delivery” – GoldenPlec) team up to deliver a range of themed songs, both original and covers, that touch on the never-ending source of intrigue that is the human condition. This event is part of a series of collaborative shows presented this week in Dublin by MusicTown, a performance programme initiated by Dublin City Council. TCL

As part of Musictown 2018, Grayscale will be hosting a live audiovisual show that will include performances from Visionist, the London-based experimental composer and producer Louis Carnell, who will be accompanied by the Portuguese audiovisual artist Pedro Maia. When the duo collaborate, their live show blends visceral elements of chaos and absurdity, making for a pulsating audio experience aided by disturbing yet beautiful images. LB

London-based pianist and music producer Tokio Myers is a fine example of the talent that shows like Britain’s Got Talent can sometimes discover, in between the armies of children in dance groups and performing dogs. Myers won the show in 2017, impressing UK voters by layering up complex synths and sample pads to compete with his live classical piano playing. His music is big and dramatic and it comes with a stunning visual display that enhances the overall thrilling impact. LB

Five years ago, Bristol-based singer-songwriter Fenne Lily released a song called Top to Toe. The song isn’t, she has said, “about heartbreak in the usual sense of the word; it’s more a sense of losing what I held close and not understanding how I felt about people moving on and changing, especially myself.” Smart words from a songwriter influenced not just by contemporary musicians such as Laura Marling, Sharon Van Etten and Kurt Vile, but also by the likes of Velvet Underground and Joni Mitchell. Her debut album, On Hold, was released last week, and if you’re in search of indie-pop with a crunchy base and a few left-of-centre surprises in the lyric department, then you’ve found it. TCL

What’s a former One Direction dude to do? In much the same way as his erstwhile boyband colleague and friend Niall Horan did at the same venue last month, Harry Styles will be plugging one hugely successful solo album (official running time 40 minutes). Factor in a few 1D tunes (including If I Could Fly and What Makes You Beautiful), a couple of new-ish songs (Medicine, Anna) and a cover (Fleetwood Mac’s The Chain), and you have a mix’n’match show constructed specifically for the fans. Prepare for screaming. Lashings and lashing of it. TCL

Dry your eyes, mate because after a seven-year break from performing live,  The Streets are back and they’re bringing a greatest hits tour with them. Even though Mike Skinner declared that The Streets were dead in 2011, The Darker The Shadow The Brighter The Light tour will see him revisit the songs that soundtracked your lairy and geezer garage-loving youth, from 2002’s glorious Original Pirate Material up to 2011’s Computers and Blues. Get in. LB

North of England’s The Unthanks have always been keen to mix things up. As a unit that explores the broader possibilities of folk music, their recording career is littered with diversions and cross-pollinations. From collaborating with Orbital and Portishead’s Adrian Utley and visiting Africa with Damon Albarn to lining up alongside Martin Hayes and reimagining the work of Robert Wyatt, The Unthanks have thrown down the gauntlet when it comes to fusion. And here’s another one: they run through their back catalogue (with sidebars, no doubt) in the company of the Orchestra of Ireland, conducted by Charles Hazlewood. Style, tradition, storytelling – three, two, one. (As part of MusicTown.) TCL

Sometimes, it makes sense for a musician to have a long-haul mentality. Take, for example, US songwriter and performer Nathaniel Rateliff. The St Louis, Missouri-born musician kicked off his music career in 2002, but it wasn’t until an appearance on Later . . . with Jools Holland in 2011 that his early promise gained momentum. From 2013’s solo work, Falling Faster Than You Can Run, and then 2015’s self-titled band album, Rateliff has surged ahead in the soul/rock game with no small composure. His most recent album, Tearing at the Seams, continues the man’s diligent reworking of Van Morrison and Stax/Muscle Shoals grooves. TCL

Another night of creative collaboration, as part of MusicTown, sees Irish band Little Green Cars perform a bunch of songs (from their two studio albums, 2012’s Absolute Zero and 2016’s Ephemera, as well as previewing new tracks from their forthcoming album) to a backdrop of work by Devon-born visual artist Andrew Vickery. It amounts to a different but mutually empathetic show combining music that is influenced by varying shades of the human condition and art (small paintings photographed onto 35mm slides, which are then back-projected) that represents, says Vickery “very particular moments of engagement with the emphasis on the feeling of the experience”. TCL

As one of the acts named in BBC Music Sound of 2018’s long list, Not3s has had a pretty good year so far, with his debut single Addison Lee going viral. The Hackney-born rapper is the up-and-coming name in the London grime scene and by drawing on his Nigerian heritage and working in elements of Jamaican dancehall music, he’s nailed a very distinctive and chart-friendly sound for himself. This gig is over-14s. LB

Pale Rivers are new enough on the scene, but the Cork and Tipperary-based five-piece are ones to keep an eye on. Good thing you have these two gigs as a way to check ’em out, eh? Their latest single Montparnasse is brooding and inwards-looking rock. Their debut EP will be out later this year and Cork indie-pop band The Shaker Hymn will be joining them on both nights. LB

Another superb evening as part of MusicTown, this sees two Irish border town artists mix it up with an American singer-songwriter. The latter is Californian Cass McCombs, whose lyrical wit and sagacity are stitched across his albums, from 2003’s A to 2016’s Mangy Love. The border town artists are peas from a pod, albeit from different counties. Cavan’s Lisa O’Neill is as singular a songwriter as they come, a responsive artist unencumbered by genre. Monaghan’s Pat McCabe, meanwhile, is the literary equivalent. Another welcome addition is Lankum’s Ian Lynch. Expect an evening of intersecting characteristics – words, music, songs – that run the gamut from sombre to funny. TCL

Áine Cahill is genuinely one of the most exciting pop artists to come out of Ireland in recent years. The 23-year-old from Cavan has a soulful voice to rival Adele’s and a cracking personality to rival none. She recently signed a major recording contract with Warner Music UK so she’s just on the cusp of something huge and rightly so. If you haven’t already dipped into her music, check out her latest single Diamonds and take it from there. LB

She may be viewed as the latest in a long line of very astute roots/country songwriters, but Arizona-born Courtney Marie Andrews brings a strong hint of punk approach to her work. Having spent time as a touring member of Jimmy Eat World, Andrews is aware that, alongside country’s narrative strengths, it’s no harm to add a bit of roughage. Her 2017 breakthrough record, Honest Life, and this year’s May Your Kindness Remain (“an album of sustained emotional connection that leaves you all the better for hearing it,” noted the Irish Times review), have been praised for their graceful, confessional songwriting that brings to mind a careful, natural blend of Joni Mitchell and Lucinda Williams. Sounds deadly to us. TCL