Singer contributed to Childline, Aids charities and many other causes 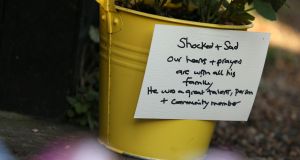 A message of condolence is pictured outside the north London home of British singer George Michael as news of the singer’s death spread. Photograph: AFP/Getty Images

Behind the headlines and huge on-stage persona, George Michael was a generous man who kept quiet about his considerable charitable donations, it has emerged.

The star donated all the royalties from his 1996 number one single Jesus To A Child to charity, and is said to have given a gameshow contestant thousands of pounds to fund her IVF treatment.

Michael has helped countless children as a result of his donations to Childline, the charity’s founder and president Dame Esther Rantzen said.

“For years now he has been the most extraordinarily generous philanthropist, giving money to Childline, but he was determined not to make his generosity public so no-one outside the charity knew how much he gave to the nation’s most vulnerable children,” she told the Press Association.

“Over the years he gave us millions and we were planning next year, as part of our 30th anniversary celebrations to create, we hoped, a big concert in tribute to him — to his artistry, to his wonderful musicality but also to thank him for the 100s of 1,000s of children he helped through supporting Childline.

“And it is particularly tragic that Christmas, which was when he released Jesus to a Child, would also be the time when we lost him.

“I think all of us have memories of particular Wham! songs and George Michael songs which mean a great deal to us.

“Certainly, for Britain’s children, George Michael meant so much more.”

And in the hours after the singer’s death was announced TV presenter Richard Osman revealed that Michael had called a woman who appeared on Deal or No Deal to give her the money she needed for IVF treatment.

Osman tweeted: “A woman on ‘Deal Or No Deal’ told us she needed £15k for IVF treatment. George Michael secretly phoned the next day and gave her the £15k.”

Michael was also among the stars involved in the original Band Aid single Do They Know It’s Christmas?, which raised more than $24 million for famine relief in Ethiopia after selling more than two million copies worldwide.

Michael, who spoke about losing his partner Anselmo Feleppa to HIV, “personally supported” the Terrence Higgins Trust for “many years”, Jane Barron from the organisation said.

“We are so saddened by the loss of George Michael,” she added. “George also often thought of us to kindly donate experiences and gifts that were used to raise vital funds to help us support people living with HIV. “Along with other charities, we were grateful to benefit from the royalties of George’s 1991 duet with Elton John, Don’t Let the Sun Go Down On Me.

“His donations contributed to a vision of a world where people living with HIV live healthy lives free from prejudice and discrimination. “Thanks to George’s legacy, we are a step closer to that world and we are so grateful for his support and friendship over the years. “Our thoughts are with his family and loved ones at this difficult time.”