Rock group, nearing end of its latest tour, has lost four of its core members in last two years 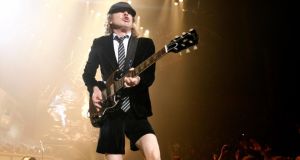 A file photograph of AC/DC lead guitarist Angus Young who has admitted the band’s future is uncertain after the departure of four of its core members in recent years. Photograph: Luke MacGregor/Reuters.

Angus Young has admitted AC/DC’s future is uncertain. In an interview with Rolling Stone, Young – who formed the band in 1973 with his brother Malcolm – said he didn’t know how he would feel about playing with AC/DC once their current Rock or Bust tour finishes.

“At this point, I don’t know,” he said, when asked about his future. “We were committed to finishing the tour. Who knows what I’ll feel after? When you sign on and say, ‘I’m gonna do this and that,’ it’s always good to say at the end of it, ‘I’ve done all I said I would do.’”

AC/DC has been stricken by departing members over the past two years. In September 2014, it was announced that rhythm guitarist Malcolm Young had departed the group, owing to the onset of dementia.

In November 2014, Angus told the Guardian that Malcolm had begun to show symptoms when the group recorded the Black Ice album in 2008, and that he had to relearn songs between shows on the subsequent tour.

“It was hard work for him. He was relearning a lot of those songs that he knew backwards; the ones we were playing that night he’d be relearning,” Angus Young said.

That was followed, in November 2014, by the loss of drummer Phil Rudd, when he was charged in New Zealand with attempting to procure a murder, threatening to kill and possession of illegal drugs. He later pleaded guilty to drugs charges and threatening to kill, and was sentenced to home detention.

In March this year the group announced that singer Brian Johnson was to stop touring immediately, on medical advice, for fear he would further irreparably damage his hearing. He was controversially replaced for the rest of the Rock or Bust tour by Axl Rose, of Guns N’ Roses.

Finally, in July, Cliff Williams – who has played bass with the group since 1977 – said he was “backing off of touring and recording” after the current tour was complete.

Williams, who lives in Florida, as does Johnson, is the singer’s closest friend within the band.

AC/DC have 10 more dates of the Rock or Bust tour to play, starting on August 27th in Greenboro, North Carolina, and finishing on September 20th in Philadelphia, Pennsylvania. Time will tell if that turns out to be the last ever AC/DC show.

Downhill: Will Ferrell in a salty remake of Force Majeure
7

The Invisible Man review: Tenser than Christmas at the in-laws’
8