Eurovision 2017: more than Pride at stake for Kiev

As a gay activist, Zoryan Kis knows how dangerous life can be in Ukraine 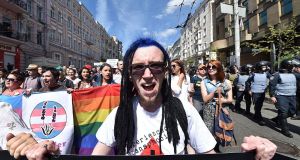 In 2015, Zoryan Kis walked through the city of Kiev holding his boyfriend’s hand while a friend filmed the reactions of people on the street. He was emulating an experiment that had previously been carried out in Moscow.

Kis, who has been an openly gay campaigner for more than 12 years, had never held his partner’s hand in public before.

He was initially heartened by the response.

Unlike in the Moscow video, most passers-by were either supportive, uninterested, or more quietly disapproving. But then, towards the end of filming, they were set upon by very young neo Nazis, who disapproved of Kis’s boyfriend sitting on his lap on a park bench They pepper sprayed the couple, punched them and kicked them.

As a gay activist in Ukraine he knows how dangerous things can be.

Kis was one of the many protesters who turned out for the pro-European protests at Maidan Nezalezhnosti (Independence Square) that triggered the Euromaidan revolution in 2014 and led to exile of President Viktor Yanukovych. The revolution was prompted by Yanukovych’s increasing rejection of European ties (he refused to sign an EU Association Agreement) in favour of Russian ones.

“The proportion of the LGBTI people at the Maidan was much higher than in the society in general,” says Kis, “because we understood that if [the protests] had failed we would become just another part of the Russian world, where we would not even have the chance to fight for our rights.”

Kis has no doubt that a move towards closer ties to Russia would have led to a worsening in the condition of gay people in Ukraine. He points to Russia’s “state-sponsored homophobia”, its law against “gay propaganda” (there’s no equivalent in Ukraine) and the new anti sodomy laws brought in in the Donetsk People’s Republic, an unrecognised region that, with Russian support, claimed independence after the annexation of Crimea. Reports from Chechnya are a nightmare for LGBTI people across the region.

As things stand now, Kis says, Ukraine likes to define itself in opposition to all things Russian. It’s not the best reason to be more supportive of gay rights, he says, but he’ll take it. There’s a long way to go, he says. “We did a study recently that showed only 5 per cent of the people in Ukraine know someone who’s gay and 90 per cent are absolutely sure that they don’t know anyone who is gay.”

Hosting the Eurovision song contest for the second time (they did so once before in 2005) brings a lot of focus to LGBTI rights in Ukraine. “Eurovision has already helped us when we were organising the Pride march last year,” says Kis, “because the authorities and the police would not be able to host Eurovision if they could not host Pride, so we used this as a very strong argument to get very high police protection and the cooperation with the city of Kiev was amazing. So it already helped us a lot.”

This was the country’s third Pride Parade and by far the most successful and most celebratory. Kis smiles as he recalls it. Nearly 2,000 people turned out, he says, many who weren’t part of the LGBTI community, but were simply appalled by the threats of violence (neo-nazis had promised “a bloodbath”). “I’m here to protect the children,” one older straight supporter said on a TV interview at the time.

Previous parades were not so successful. 2015’s march was marred by far-right violence. A policeman was very badly injured and participants were attacked as they tried to make their way home. 2014’s parade was cancelled by the authorities at the last-minute because they felt they could not protect the marchers. 2013’s parade, the first, took place in the pre-revolutionary era when Viktor Yanukovych was still trying to impress European leaders. That march involved 80 people walking 150 metres within a cordon of police before being bused to safety. “It was near the zoo,” says Kis, “and we felt like animals in a cage.”

Things have improved for gay people since the 2014 revolution, Kis says, but much slower than he would have liked. A law protecting LGBTI people in the workplace has been introduced but a “very good” national human rights action plan has yet to be implemented. “It has a number of protections for LGBTI people, like a law on registered civil partnership,” says Kis. “Everyone, especially Ukraine’s partners in the EU, really likes the document.”

He sighs. “But this is what happens in Ukraine with reforms — we have excellent action plans, but we forget to implement them.”

The Eurovision’s identity as an event popular with gay people around Europe is overshadowed somewhat in Ukraine by other political considerations, says Kis. This year the event has been heavily politicised by the Ukrainian/Russian conflict. Last year’s winning Ukrainian entry was a song, sung and written, by Jamala about the Stalinist expulsion of the Crimean Tatars, a thinly veiled allusion to contemporary Russian foreign policy.

This year’s Russian contestant, Yulia Samoilova, has been forbidden entry to the country because she performed in Crimea after the annexation (she is, instead, performing a concert in Crimea again). “Eurovision is seen as another arena of international politics even though it’s their policy to stay out of politics,” says Kis.

Nonetheless, most people in Kiev seem excited by the Eurovision, he says, barring a few who are disgruntled by traffic disruption. “Eurovision is generally quite popular in Ukraine,” he says. “It’s also very important to show to the people in Europe and in the world, that though the country is struggling — it has difficult economic situation, we have the conflict in the east — it is nevertheless a safe and friendly place.”

He laughs. “It’s a very soviet thing – we might be struggling economically, we might be very poor and falling apart, but we will throw a big party for everyone so they see how almighty the country is.”

Kis is busy helping to organise this year’s Pride parade at the moment, but he’s looking forward to the week ahead. The road running through Maidan Nezalezhnosti, the birthplace of two recent revolutions, is now the home of the Eurovision village. There’s a hugely increased police presence, says Kis, and he laughs “and I think they’ve done a course in how to smile”.

And there is also something called the Arch of Diversity.

This is an arched monument, originally created in the soviet era to signify friendship between Russia and Ukraine, that is now partially painted in rainbow colours.

The authorities were a little vague about the meaning of the word “diversity” in this context (the tagline of this year’s competition is “celebrate diversity”), but some far right groups condemned the paintjob as “gay propaganda” and so work was halted and the painting has yet to be completed.

The second semi-final (which includes the Irish entry) takes place on Thursday and will be live on RTÉ 2 and BBC Four (from 8pm).

The final takes place on Saturday and will be broadcast live on RTÉ 1 and BBC 1 (from 8pm).