The music. The food. The clobber. Here’s the best and worst of this year’s Electric Picnic 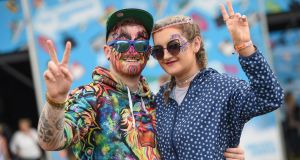 Best artist: After a long and bloody argument in the Ticket Tent late on Sunday night, with tempers frayed and blood set to boil, we still couldn’t reach a consensus. Perfume Genius took a late night Saturday slot and blew it up into a subtle riot; DJ Mo K and his gang’s hip-hop odyssey was extraordinary, if you managed to squeeze into the Friday night tent; Le Boom destroyed the Body and Soul main stage and made waiting in the rain until 3am on Sunday morning entirely worth it; and as we were closing up shop, the first pristine sounds of Duran Duran were threatening to steal it at the death.

Best new artist: Funky Dubliner Katie Laffan crystallised all that on-wax promise with two groovy sets that drew strength from Rick James, Erykah Badu and D’Angelo without being overly indebted to any one in particular.

Best tune: One of the tunes of the festival has to be Elaine Mai’s remix of Wicked Game. It absolutely killed the Body&Soul main stage on Saturday night.

Best lounging spot: The Haunt. And it was even better if you managed to sneak in an Elderflower Collins from the Dark and Stormy bar next door.

Worst sound and worst place to sit: The picnic tables between the Today FM, Casa Bacardi and Just Eat areas. The crossover sound from each area ate into the other, at times piercing, at other times like a mince mallet to the brain.

Best DJ and hero of the weekend: The Throwback Stage genius who played Scatman on the hour every hour like a stuttering pop Angelus. He revived flagging spirits with Gala and Living Joy’s Dreamer. He turned the crowd of glitter-faced girls into that rascal Shaggy as they tried their damnedest to sing along to It Wasn’t Me. It’s your Atlantic 252 dreams come true.

Smartest EP hack: Friday night was one of the coldest nights at the Picnic in memory, leaving everyone shivering with PTSD on Saturday. Enter the best sleeping hack around: foil space blankets that trap your heat and prevent another terrible night’s sleep.

Biggest faux pas: Everything Everything frontman Jonathan Higgs shouting out to the “Electric Field” crowd. The group were playing the Electric Arena tent, giving him two opportunities to remember - or even correctly guess - where the hell he was.

Most ironic moment: There was a bleak irony in Pete Tong with his shiny, smiley face cheerily announcing: “It’s Saturday night and I’m here to bring you Ibiza classics and some sunshine,” as the biblical rain slid off the crowd’s faces like they were a pane of glass. However ...

Best posh food: Oysters at the Salty Dog stage. Putting the arrrr into artisan, the most decadent of delicacies was available in the maritime-themed area thanks to Flaggy Shore Oysters. €5 bought you an oyster and a Dirty Mary to wash it down – and a bit of unexpected fanciness. Though it’s a brave soul who tries them.

Biggest rip-off: A bottle of Prosecco, every year’s must-have accessory, had its price jacked up to an astronomical E35.10 in Mindfield. We particularly love the extra 10c, a flagrant disregard of the .99 rule that at least tries to pretend you’re not being fleeced. To add a slap to the insult and the injury, paper cups are an extra 20c each. And yes we realise these are middle-class problems.

Best offstage outfit: Give it up for the gal with printed leggings bearing Kim Kardashian’s crying face on repeat. we’re not sure if she made them herself or just has amazing shopping skills, but either way, she wins at Electric Picnic.

Best onstage banter: “We thought no one was going to come. Like a party where you’re waiting and you’ve got too many red cups out”: Awwwww, Search Party Animal.

Best cover: Bruce Springsteen’s Dancing in the Dark was given the Saint Sister treatment - they slowed it right down, set it to a harp, and turned it into something approaching a hymn. Deadly.

Saddest moment: “We are your childhood,” said S Club’s Bradley unconvincingly during their damp set at Electric Ireland’s Throwback Stage. If they are our childhood, then adulthood is going to be one long road of backing tracks, heartless banter and disappointment, while wondering if maybe we should just switch to Bord Gáis instead.

Best rumour: Festival rumours had longer legs back in the WAP days, when no one could fact-check the rubbish you spewed at 3am, but with enough conviction, you can sell any old story to even the sharpest of tacks. Someone heard from a friend of Bitch Falcon’s that Queens of the Stone Age were making a Main Stage appearance. A LIE. Someone made brazen claims on Twitter that Ed Sheeran was planning to perform. WRONG.

Best stage sound: The Main Stage. Okay, you really only notice sound quality when it goes gratingly wrong. But if you pricked up your ears you could hear how immaculate the sound of the Main Stage was all weekend, delivering the pinpoint detail of The xx, the pristine arrangements of Phoenix, or the rich warm tone of A Tribe Called Quest. That’s a feat of great engineering and constant collaboration with the acts. The results spoke for themselves, loud and clear.

Best teen dream: Cut from the alabaster statues of the gods, John Taylor’s cheekbones are the true classical source of beauty that the tired eyes of the Sunday Picnic needed to feast on. Forever the poster-boy heartthrob, he’s the eternal name written on copy-books, still managing to cut a dashing figure when all around are frayed at the edges.

Best watertight performance: Phoenix. The rain in Stradbally fell mainly on the silvery French electro-popsters, testing the mettle of more fair-weather fans. Those who withstood the elements were treated to a pristine set, a sumptuous confection of tone, texture and detail, and singer Thomas Mars’s winning solidarity with the sodden. Dressed for the weather of his deepest hopes, Mars climbed out at the set’s conclusion to crowd surf, but the response was so galvanised he could stand upright, born aloft on their damp hands, sharing drinks and making conversation. “Was it raining?,” we asked. We hadn’t noticed.

Best mirthful distraction from the cold certainty of oblivion after three days in a field in Laois: Paul Currie’s Fffffffmilk! (Pronounced just as its spelled.)