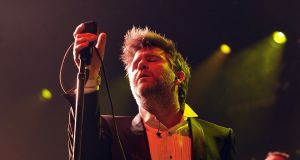 Electric Picnic typically has the best line-up at an Irish festival, but this year’s first tranche of acts is particularly formidable.

Headliners LCD Soundsystem had long been predicted, once James Murphy announced news of their reform. Murphy was on site last year with his spectacular Despacio project; getting the band back together in Stradbally is enough to shift thousands of tickets on its own.

The Chemical Brothers are no strangers to Stradbally and typically come with a spectacular stage show. New Order should give them a run for their money. Lana Del Rey will bring a touch of class to proceedings, but one of the best festival sets could come from Haim – they delivered a supercharged set at Longitude in 2014. Expect Savages to also make a play for best guitar band.

Further down the bill, there is plenty worth picking over. Expect Nathaniel Rateliff to have a whole lot more fans in Dublin after his show on March 12th; Jack Garratt gets bumped up the EP bill after last year’s slot, following the release and hype around Phase. Pantha Du Prince’s The Triad project is very, very interesting, while Broken Social Scene have a habit of delivering the sort of chaos that festivals thrive on.

And if the organisers don’t create a special zoo-themed tent to house sets by Animal Collective, Wild Beasts, Wolf Alice and Super Furry Animals, then we don’t know where their sense of humour is.

This is just the first salvo in the Picnic line-up attack so expect more slots to be filled as the weeks go on. Radiohead are playing at this year’s Primavera in Barcelona and have yet to confirm any Irish dates. Sigur Rós have already announced a summer date in Royal Hospital Kilmainham, which puts them out of the running. And Arcade Fire could yet make a date to close out the Irish festival season.

Tickets are on sale now at the usual outlets. We’ll meet you just to the left of the sound desk at the main stage, yeah?

Inglorious Empire: what the British did to India
2

Are you a bad guy? Then no iPhone for you, says Apple
8