Dubliners singer Jim McCann dies at the age of 70 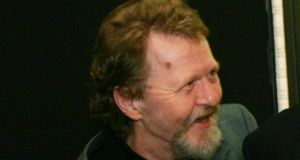 Jim McCann, singer and former member of the folk group The Dubliners, has died at the age of 70.

McCann was born in 1944 and grew up in Rathgar, Dublin. He studied to be a doctor, but instead followed his interest in folk music.

He joined a group called the Ludlow Trio in 1965. The group had a No 1 record in the Irish charts in April 1966 with the Dominic Behan song The Sea Around Us.

McCann then had a successful solo career as a singer and actor. One of his most famous recordings was Grace, a song written by Frank and Seán O’Meara, which he released in the 1980s.

He also hosted a series called The McCann Man on RTÉ, which was broadcast in 1974 and featured the only television recording of Luke Kelly singing Scorn Not His Simplicity.

McCann and Kelly became friends and later starred in Jesus Christ Superstar together.

McCann became a permanent member of The Dubliners in 1975 and stayed with them until 1979.

In 2002, he was diagnosed with throat cancer. In recent years he has been unable to sing as a result of his illness. Last year he admitted that his health was “seriously compromised” but that that was balanced by having a loving wife and family.

Former Dubliner John Sheahan described McCann as an “incredible singer with a beautifully sweet lyrical voice”, which had put the “definitive stamp” on songs such as Four Green Fields, Carrickfergus and Boolavogue.

Mr Sheahan recalled McCann as a “great storyteller and raconteur who would keep us entertained for hours. He was effervescent, bubbly and good humoured”.

McCann is survived by his wife Phyl.