US heavy metal group Bad Wolves have presented a cheque for $250,000 (€217,000) to the family of the late Dolores O'Riordan, the band raised the money from sales of their cover of the Cranberries hit "Zombie." Video: Eleven Seven Music 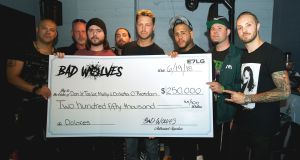 The Cranberries singer was due to sing the vocal on the band’s version of Zombie before she was found dead in a London hotel room on January 15th this year.

In the immediate aftermath of the tragedy, Bad Wolves announced that they would go ahead and release the song anyway and give the proceeds to her children, Donny Jr, Taylor, Molly and Dakota.

The cheque was handed over to their father, Don Burton, and sons Donny Jr and Taylor on Wednesday in New York.

Bad Wolves’ version of Zombie has been a global phenomenon including in Ireland where they were guests on the Late Late Show.

The song has been certified Gold in the United States and Australia, as well as gaining Platinum status in Canada.

Bad Wolves have also earned the number 1 spot on the Billboard Emerging Artists chart. Additionally, the single has topped the iTunes Metal chart in the UK and Germany for five straight months. The official music video, a tribute to O’Riordan and an homage to the original has garnered over 125 million views across platforms.

Singer Tommy Vext said the sadness they felt on the day that O’Riordan died was nothing compared to that of her children and family.

“The ultimate goal is to present them with a $1,000,000 cheque - and the fact we’re a quarter of the way there is beyond incredible,” he said.

“The connection that people have to this song, the stories, the memories and the kids who are hearing this song through Bad Wolves for the first time - it’s a true testament to the timelessness of their mother’s songwriting that will live on forever, and we are so grateful to be able to do this for them.”