Dave Grohl: ‘If it wasn't for Ireland, I wouldn’t be walking’ 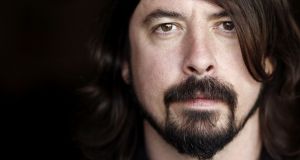 Dave Grohl: I thought the most radical idea for us right now would be to just to walk into a studio and make a record

When it comes down to it, Dave Grohl actually has a lot to thank Ireland for. True, the Foo Fighters frontman may be lying on a beach in Hawaii when he answers the phone, but he would freely admit that he owes a lot to a certain Irishman, at least.

“If it wasn’t for Ireland, I wouldn’t be walking right now, because my physical therapist Freddie Murray is from Tipp,” he insists, the sound of the wind and the waves lapping in the background.

“He was with me for six months, and I would not be walking if it wasn’t for that guy. Four hours a day for six months, he was the one pushing me to get up and do it again. So next time we’re there, we gotta have a big shout out to Freddie.”

Grohl’s injury made quite a few headlines back in 2015 when he tripped over a cable mid-gig in Gothenburg, Sweden, and took a tumble off stage that led to a badly broken leg. Although he famously continued the tour from a custom-made “throne”, it forced the cancellation of the rest of their European dates, including a planned Glastonbury headliner (which they made amends for in thrilling fashion this year.)

More importantly, however, it sent the band into an “indefinite hiatus” at the beginning of 2016, with Grohl admitting that the injury was proving tough to recover from, both physically and mentally.

It meant that when they eventually regrouped for their ninth studio album Concrete and Gold, a change-up was on the cards – particularly after the gruelling process of 2014’s Sonic Highways album and documentary project.

“I had this f**king crazy idea for the next record. I said, ‘Okay, here’s what we’re gonna do. We’re gonna book one night at the Hollywood Bowl, and we’re gonna build a recording studio on the stage, invite 20,000 people and record our new record live to the world.’ And I just kept pushing it, seeing how far we could take it, see how extreme we could go . . . and I brought the idea to the band, and they said ‘You’re f**king crazy’,” he recalls, laughing.

“I was like, ‘No, no. We can do it.’ Then we went on the road for Sonic Highways, and we stayed out for another six months, until we decided we needed a break. And once I actually got home, sat down and thought about it, I thought, Y’know, the most radical idea for us right now would be to just to walk into a studio like any other f**king band and make a record.”

It was in Hawaii that he first met Greg Kurstin, the man who would help them make that comparatively back-to-basics album, after becoming a fan of his band The Bird and the Bee.

“That first Bird and the Bee record became my favourite album that year, I listened to it a thousand times – as well as the heavy shit like Motörhead and Sepultura and all of those heavy things that I like.

“I just imagined that the pairing of those two things would be the ultimate Foo Fighters album, because those are two things we’ve always loved. We’re deep-rooted in our old-school garage punk-rock, but we also love 1970s AM soft-rock, like Gerry Rafferty. So I thought ‘Okay, well we can provide the noise. We can make the whole four-and-a-half-minute heel-stompers – but he can give us this beautiful Pet Sounds/Beach Boys sense of melody and harmony over it.”

He admits that Kurstin, a renowned producer best known for his work with pop artists, was not the most obvious choice for one of the world’s biggest rock bands.

“When I said to the guys ‘We should do this record with Greg Kurstin’, and they said ‘Well, what has he done?’ and I said ‘Well, he’s worked with Beyoncé, Sia, Pink and Adele’,” Grohl recalls, laughing. “They were like ‘What the f**k? How on earth would that ever apply to what we do?’ and I said ‘No, no, no – he’s more than just a pop producer. He’s one of the most brilliant musicians I’ve ever met in my entire life.’ So we knew it would work.”

We’ve been together now for 22 years, so we know each other like we’re brothers

When it came to writing the lyrics for the album, Grohl began the process on his own and found that – given what’s going on in his home country – the outside was seeping in. Concrete and Gold is by no means a political album, but there are subtle references on the likes of La Dee Da and Happy Ever After.

“I think that the political does influence the emotional in some way,” he says. “I decided to move out into the country for a week with just a case of wine and a microphone and a guitar to see what’d come out, and a lot of the lyrics came from just singing into a microphone, stream-of-consciousness stuff.

“After listening back, I started to find a common thread or theme that was about . . . I dunno, fighting your way through today’s life, looking for some ray of hope. So on a lot of the lyrics, I’m questioning myself and questioning the world and trying to find some light at the end of the tunnel – which is the song Concrete and Gold. Yeah, I mean . . . we’re not Rage Against the Machine. We’re not making any sort of revolutionary anthems, but it’s inevitable that that sense of dread makes its way into your emotional state, and eventually on to paper.”

The cheery Grohl becomes more sombre when he speaks about his emotional wellbeing post-injury. Given the recent suicides of his peers Chris Cornell and Chester Bennington – and his own experience with the loss of his Nirvana bandmate Kurt Cobain – I ask him if Foo Fighters have any practices in place to safeguard their mental health.

“Well, y’know, we’ve been together now for 22 years, so we know each other like we’re brothers,” he says.

“We’ve always been really good at knowing when to stop, and keeping each other in check and making sure that everyone’s okay. It’s hard. Every one of those tragic situations has their own set of complexities, and the most we can do as a band is just show each other love. I mean, I love Pat Smear just as I would love one of my own family members.

“We’ve been through funerals and weddings and divorces and lawsuits and Glastonburys and band tours – we have a lot of history together. Taylor Hawkins: I mean, he and I are joined at the f**king hip. All I have to do is look in his eyes to know if anything is going on. I wish every band had that same feeling – I hope many do – but this band, we all feel very fortunate for what we have.

“We still, to this day, can’t believe the level of success that we’ve achieved. The last tour, where the audiences were bigger and louder than ever, we actually sat after a gig one night looking at each other and said ‘I don’t know if we deserve this’,” he chuckles.

“We just feel unworthy a lot of the time. But we definitely cherish what we have, there’s no question.”

Now that they’re pretty much the biggest rock band in the world nine albums in, there must be a sense of enjoying the ride after the journey it’s taken to get here.

“Yes and no,” he says, pausing for a moment. “I mean, you definitely wanna push yourself into a place you’ve never been, but the greatest reward and satisfaction is within the band. I love coming up with a new song and having it come together in the rehearsal space, then exploding in the studio, and then getting on stage, playing it live and watching thousands of people sing-along. That’s an amazing feeling of accomplishment. But I’m one of those people who assume all of our fans hate our band,” he laughs, only half-joking.

“I know that we have an incredible following who’ve been with us for a long time – but I never assume that people know us, or enjoy the Foo Fighters. If I was in AC/DC, then I would just assume that everyone loves AC/DC – because they do. But with me, it’s a little more . . . I dunno. I would love for everyone to love the band, but I just assume they don’t.”

That’s exactly the attitude you’d expect from the unofficial Nicest Man in Rock – but there’s still plenty of fire in Dave Grohl’s belly.

“And the second we hit the stage, that is all I wanna do in life. Just to make that ceiling bounce, or arena hot, or whatever. Honestly, it’s still that innocent feeling of just bringing the party to an audience every single night. That’s never gone away.”

Concrete and Gold is out on September 15th