The National, Bon Iver, Cillian Murphy, and Enda Walsh in Cork with no safety net 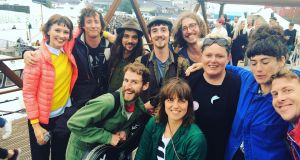 ‘140 musicians from 80 bands drifting in and out of seven rooms to play, alongside the audience in an old radio and recording centre’

When I last spoke to Mary Hickson about Sounds From A Safe Harbour, the first edition of the festival hadn’t yet taken place and Hickson was in her last month as CEO of the Cork Opera House.

Two years later and that initial two-and-a-half-hour conversation with The National’s Bryce Dessner in a hotel in Cork in 2013 has touched every part of her professional life since, taking in ambitious events in Berlin, Copenhagen and now back to Cork for the second edition of Sounds From A Safe Harbour.

The 2015 edition of the festival was already ambitious in favouring collaboration and melding indie-rock and neo-classical music, but the 2017 programme (curated by Bryce and Aaron Dessner, Mary Hickson, Cillian Murphy and Enda Walsh) runs with the idea of improvised collaboration and being present for the genesis of a new project.

Even Hickson doesn’t know exactly what’s going to happen from September 14th to 17th in the venues around Cork city.

“What we are most excited about is the stuff that we know nothing about yet,” beams Hickson. “The audience may be the first to see something brand new. That will happen. We just don’t know what they are and where we’re going to show them.”

No one knew quite what would happen next

It’s an unusual sentiment for a festival curator a week out from their festival. But it’s an ethos that Sounds From A Safe Harbour has adopted from a week-long gathering of musicians in Berlin’s Michelberger Hotel last year. Some 140 musicians including Justin Vernon (Bon Iver), the Dessners and representatives from more than 80 bands convened just to see what would happen.

The result of the week’s jamming and playing together culminated in a two-day unnamed festival in an old radio and recording centre in Berlin called Funkhaus with seven performance spaces filled with musicians drifting in and out of rooms to play, alongside the audience. No one knew quite what would happen next.

Now titled simply People, the week in Michelberger was an exploration into what was possible to construct when the rules around live performance and corporate interests weren’t dictating the music on stage. Instead, the musicians operated in a spirit of loose collaboration. Hickson was responsible for configuring the programme and it left a big impression.

With 140 musicians arriving in one place but not knowing what they would be doing, it was Hickson’s job to facilitate those connections.

“Everyone was a bit apprehensive and anxious about what was expected of them. My office was the centre of it all so it was a bit of a therapy room for many who are really out of their comfort zone. There was no hierarchy.”

While there are plans to do it again in Berlin in a more manageable format, the connections and collaborative spirit formed means a core group of people have brought the ethos elsewhere including Justin Vernon’s Eau Claire festival in Wisconsin and Haven festival in Copenhagen last month. Now, the majority of them are coming to Cork and bringing the ethos with them.

“It’s a network or web of people who are moving together now, and every time they move they pick up somebody else,” says Hickson.

What that means in practical terms for the Sounds From A Safe Harbour programme is secret gigs and pop-up performances that will come out of the jamming that happens off-stages in spaces of the city. It may include local artists like Crash Ensemble and Slow Moving Clouds along with the established international names.

“We’ve made a choir that are going to work with Justin Vernon on the Bon Iver show. Fionn Regan is going to be around, and as he sings on Justin’s album on the last track, there’s a chance he might do something. There are people in town that will be participating in a residency that I can’t say for contractual reasons from their perspective, but things might come out at the end of the week in secret gigs around the city.”

While Bon Iver and The National will both perform sold out Cork Opera House gigs at Sounds From A Safe Harbour this month, there’s a sense of hunger in their involvement in these new experiences that is driving them alongside their more well-known work.

“It’s way more fulfilling for them, “ Hickson says. “They don’t want to be a cut-and-paste kind of musician, dropping the same stuff everywhere.

“Aaron [Dessner] played 20 different gigs at Haven over the weekend. They’re so open and versatile. There’s an incredible vulnerable energy as opposed to rattling off something you’ve rehearsed.

“There’s a generosity and an exchange about this that they would not normally get.”