Courtney Lewis serves up an energetic slice of Haydn

The conductor and the RTÉ NSO show Haydn a good time; and Ó Riada’s score for Mise Éire leaves me cold 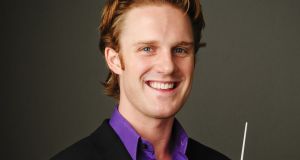 For Courtney Lewis, above, Haydn is a bedrock of the repertoire. Photograph: Travis Anderson

Haydn has not been having a good time with the RTÉ National Symphony Orchestra. A work as popular as his Clock Symphony has been neglected for more than 30 years, and just two of his 100-plus symphonies have featured in the orchestra’s programmes over the last five years.

Courtney Lewis, who on Friday conducted a stylish performance of Haydn’s Oxford Symphony (No 92), spoke with passion about the importance of Haydn in a pre-performance interview. For him Haydn is a bedrock of the repertoire, a foundation for best practice in orchestral performance. It is music that is difficult to play but for all the right reasons.

Lewis is aware of how the period- performance movement has encroached on the 18th-century end of symphony orchestras’ repertoire, and he clearly disapproves of the way larger orchestras have allowed part of their territory to be annexed by musicians who favour a lighter and more lithe performing style.

The picture is not quite as black and white as he presents it. Major figures from the period-instruments movement have brought their aesthetic to leading orchestras on both sides of the Atlantic. Simon Rattle didn’t start life in that movement, but he now works as happily in it as with the Berlin Philharmonic or the London Symphony Orchestra. And there’s a younger generation of performers whose approach is to embrace the aesthetic of period instruments without necessarily adopting the instruments themselves.

Lewis seems to fall into this category, and his way with the Oxford Symphony presented an orchestra that, musically speaking, had gone through an Operation Transformation-like shedding of fat and a building-up of muscle. The energised Haydn he conjured up had sinew and structure and, by the standards of NSO Haydn performances, was uncommonly affecting.

Lewis was lucid, too, in the first performance of Raymond Deane’s four-movement The Alma Fragments. These are based on Deane’s opera The Alma Fetish (2006-2012), which, in the composer’s succinct summary, “tells of the relationship between Mahler’s widow, Alma, the painter Oskar Kokoschka, his maid Hulda, and a life-sized doll that takes Alma’s place when she abandon’s Oskar”.

The doll, incredible as it might seem, was a historical reality, commissioned by the painter and anatomically accurate, not something that Deane nor his librettist, Gavin Kostick, had to invent for the opera.

Just as the abandoned painter partly lived his relationship with Alma through another – the doll – Deane uses the opera to live through another musical period: the expressionist world of early 20th-century Vienna.

Alma seduced Oskar by singing the Liebestod from Wagner’s Tristan und Isolde, so the Alma Fragments give more than a nod to the kind of Wagnerian piss-takes that French musicians once did so well in pieces such as Fauré and Messager’s quadrille, Souvenirs de Bayreuth, or Clément Doucet’s Isoldina.

Deane relishes the opportunity to have his cake and eat it, to move in and out of a historical period he is deeply attached to. That relish was well-reflected in the energy and drive of The Alma Fragments.

Rachmaninov’s late Symphonic Dances, which ended the programme, are among the composer’s most immediately appealing works. But the pieces are hard to hold together, not least because they cover the same ground again and again. Lewis worked hard to introduce variety by finding inner lines to spotlight, but didn’t quite manage to find the long arches that can really keep the sense of excessive recursiveness in check.

Evening the score with Mise Éire

It was the RTÉ Concert Orchestra that held the stage at the National Concert Hall on Thursday to play the live orchestral score for a screening of George Morrison’s 1959 documentary Mise Éire. It is fair to say that the film electrified the nation, and the score by Seán Ó Riada (or John Reidy as he was still referred to in these pages at the time of the film’s premiere) has also taken a special place in people’s affection.

I know I am in a tiny minority, but I find Ó Riada’s music for the film to be a shoddy piece of work, the kind of score that identifies clearly where in the film music can be of use, but doesn’t really provide what would be of use. David Brophy’s reserved handling served both film and composer better than Ó Riada’s conducting on the original soundtrack.

The film’s script, by the late Seán Mac Réamoinn, was read by Cormac de Barra and Clíona Ní Bhuachalla, and now sounds more than a little propagandist. But the visual impact, even on a small screen in a less than ideally dark auditorium, remains powerful and evocative. Morrison’s years scouring European archives for suitable material were well-spent. And it was wonderful that the man himself could be present for the occasion.

Saturday brought a performance of Handel’s all too rarely heard oratorio Samson with Chamber Choir Ireland and the Irish Baroque Orchestra under Matthew Halls. Even with the cuts Halls made, it is a long work, and in Saturday’s performance it amounted to less than the sum of its sometimes very good parts. The overall shape might just be wrong.

The best contributions came from the always alert and sensitive choral singing and orchestral playing, and Halls’s responsive shaping of the whole. But tenor James Gilchrist’s Samson seemed off-colour, and alto Madeleine Shaw’s Micah was less than appealing.

Soprano Katherine Watson sounded more attractive as Dalila, and the most consistently rewarding of the main soloists was bass James Oldfield’s clearly focused Manoah. The small parts taken by singers from the choir (sopranos Kate Macoboy and Abbi Temple) had a directness and immediacy that set them apart from all the other soloists.