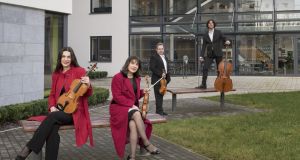 Galway ConTempo Quartet: ‘For me, the pinnacle of the RTÉ residency was that we got the chance to do the Beethoven cycle and the Béla Bartók cycle around the country’

The four members of the Galway ConTempo Quartet, who relocated from Romania to the west of Ireland to become the Galway Music Residency’s ensemble-in-residence in 2003, celebrate their 25th anniversary as an ensemble this year.

They’re certainly not celebrating the occasion in the style they would have expected to. But four programmes of Beethoven quartets during Galway International Arts Festival’s Autumn Edition programme is a big deal for players and audiences alike, given the shredding of cultural schedules that 2020 has seen.

The quartet have now spent most of their adult lives in Ireland. They are all Irish citizens and started their families here. The leader, Bogdan Sofei, is married to the second violinist, Ingrid Nicola; and the viola player, Andreea Banciu, to the cellist, Adrian Mantu.

So, given the occasion – a first for all of us, meeting for a socially distanced, in-person interview with everyone wearing masks – I ask them first about what they miss from their home country. Friends, family and colleagues top the list. Beyond that, Banciu mentions nature and food (especially mountains and watermelons), and Mantu hankers after what he calls the buzz of the competitiveness in the music world of Romania. Over there, he says, there are probably more than 20 string quartets like them giving more than 60 concerts a year. Here in Ireland, they now have the field to themselves. And, even more, he misses the higher position of classical music in cultural life in his home country.

Nicola also misses “the heat, I will always miss the sunshine. I need the heat.” But Sofei points out that, “on the other hand, when we have sunshine in Galway, we really appreciate it.”

Their conversation is often argumentative, and they laugh a lot about fighting over musical issues during rehearsals. It’s as if their need to get everything precisely tied down for the performance has filtered into their everyday behaviour. Or perhaps it’s the other way around.

Getting the Galway residency was somewhere between an accident and an act of subversion. They were studying in Madrid, and it was Mantu who spotted the advertisement and brought it to the attention of the others. They decided they were too young, too inexperienced for it. But Mantu applied anyway.

“We voted democratically,” he laughs. “But we took a communist decision. Only 25 per cent voted for it, but we went ahead anyway.”

The residency has been especially rewarding, says Nicola, “because it offers us a very complex way of being a musician. We are performing, we are premiering, we have works that are dedicated to us, which is phenomenal, I think, for any artist. We are meeting composers and talking about music in workshops and sessions of contemporary music. We are doing recordings, Leaving Cert workshops, and also teaching primary school pupils. We have reached schools I could never have dreamt of knowing, on the Aran Islands and in Connemara.”

She takes pride also in the fact that the residency survived the recession and is still managing to survive lockdown.

Mantu says, “We have collaborated in every artform with nearly every single artist living in Galway.” This year’s plans included jazz, choir, dance and local schools, and they’ve long explored partnerships with traditional Irish musicians.

The connections with Ireland are intricately intertwined at this stage. Banciu talks of the pride she felt when her daughter Clara, who studies cello, won a prize at the Feis Ceoil in Dublin. Her delight was not just about her daughter winning on her first attempt, but also about the fact that when her name was called out, she was Clara Mantu from Galway, giving the city a presence in a forum in which Dublin usually dominates.

Mantu remembers as a youngster in Romania seeing his father reading James Joyce’s Dubliners – in Romanian, not in English. There’s a mention of the cemetery in Oughterard at the end of the story The Dead, and a description of how the snow “lay thickly drifted on the crooked crosses and headstones, on the spears of the little gate, on the barren thorns”. His father passed away in his 70s, playing football on a visit to Ireland, and is now buried in that very cemetery.

When the Vanbrugh Quartet’s long-standing residency with RTÉ was terminated, the ConTempos tendered the successful bid to replace them, and their new role brought them an increased prominence from 2014, both in Dublin and on national tours.

Says Nicola, “It was important to perform in the National Concert Hall. It is the most important venue in the country. But, for me, the pinnacle of the RTÉ residency was that we got the chance to do the Beethoven cycle and the Béla Bartók cycle around the country. These things are extremely important for any string quartet. It is something we dreamt of doing since we studied with the Amadeus Quartet in London. They told us, ‘You can’t call yourself a proper string quartet if you don’t do the Beethoven cycle.’”

Banciu says she was deeply shocked by lockdown. She was involved in multiple non-quartet projects, hadn’t had a day off in months, and suddenly it all stopped. “For about a month or two I couldn’t do anything. I wasn’t interested or motivated. I couldn’t see any point in anything.” Not even in recording spoken introductions for videos to go up on YouTube.

Every concert I do I feel that I’m being transported. I know that sounds naive

Then she flew to the opposite extreme and practised with relish – “technique, the most complicated and sophisticated scales, for hours, and I even wanted more. I loved it. I developed.”

On a personal level, “we stopped and could contemplate life, to enjoy the simple pleasures in life, to rediscover that we have children, to go for walks, to rediscover Ireland, go for hikes in Connemara and cycle”. Mantu concurs. “We had the best time just here in Ireland.”

Nicola and Sofei tried to keep themselves busy by applying for projects as a violin duo, giving lessons over Zoom. She reaches for the positive in the experience. “I would like to think we are a little wiser, because if we aren’t, it would mean that this lockdown didn’t teach us anything. We should be more understanding, more tolerant, and be aware that having an ensemble to experience great music is a phenomenal thing. Teamwork is something that has to be treasured.”

I ask each of them for a personal highlight from their quarter of a century together. Nicola chooses: “When we were in the London International String Quartet Competition and won the third prize. We were so happy. But then they called out the audience prize, and it went to us, the first time ever that the audience had not voted for the first or second prizewinners. We had no expectation. The feeling was completely unbelievable.”

Banciu says, “Every concert I do I feel that I’m being transported. I know that sounds naive. It’s just that I feel such joy at being able to play music.”

Mantu adds, “The best moment in my life is the concert I have just finished.”

Sofei, appropriately for the leader, takes the issue up a notch. “A real highlight for me is when we four on stage do everything just for the music and not for our egos. That is what I treasure the most.”