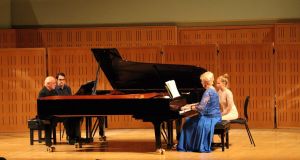 John O’Conor and Veronica McSwiney at the NCH

It’s a remarkable fact that John O’Conor and Veronica McSwiney never gave a concert together before last Wednesday. These two Irish pianists have known each other all their lives, but it wasn’t until they were aged 69 and 76, respectively, that they partnered on stage for a concert.

That’s partly due to the fact that a two-piano concert is a rare enough occurrence. For performers it’s an exacting undertaking, the percussive attack of the piano allowing almost no hiding place for even small lapses in ensemble.

The leaders in the field have tended to be pairings with special connections, siblings and married couples. Ireland’s most celebrated duo were the Enniskillen sisters Joan and Valerie Trimble, who became mid-20th-century celebrities through regular appearances on the BBC radio programme, Tuesday Serenade.

O’Conor and McSwiney retained distinct musical personalities in their partnership, he warm in tone and conventionally expressive, she cooler and more chiselled in delivery. Composers like to throw material to and fro between the performers, so distinctions in character between players are always an advantage.

Their programme offered three staples – Mozart’s Sonata in D, Rachmaninov’s Second Suite and Milhaud’s Scaramouche – and an arrangement of Tchaikovsky’s Nutcracker Suite by the Cypriot pianist and composer Nicolas Economou.

For me the playing peaked after the interval in the irrepressible cheeky, chirrupy writing of Milhaud’s 1937 Scaramouche. Judging by the applause, the audience vote would have gone to the Tchaikovsky. But I couldn’t help feeling that Mikhail Pletnev’s Nutcracker arrangement for piano solo captures more of the feel and colour of the original, although his version does not cover exactly the same excerpts.

Even rarer than two-piano concerts are events which present an ensemble of cellos onstage. But that’s exactly what Cello Ireland has been doing for the last three years.

At the NCH on Sunday afternoon the main original work was the fifth of Villa-Lobos’s Bachianas brasileiras, a series of compositions in homage to Bach, but all with a Brazilian tinge. Bachianas brasileiras No 5 is one of those pieces once heard never forgotten, a combination that somehow never fails to thrill – a soaring soprano backed by cellos that both sing along and chug.

Claudia Boyle has just the right sort of easy, flowing freedom that the music requires, though on Sunday the balances between the conductor-less ensemble and the solo voice were not always in her favour.

There were no such problems in the unattributed arrangement of Haydn’s Cello Concerto in D, with German cellist Daniel Müller-Schott the always musically elegant soloist. The arrangement may not be a consistently successful affair, but it is always good to be reminded just how gorgeous and varied a body of sound a group of eight cellos can produce.

Gorgeousness and sensuality, allied to the sweet-tooth harmonic practices of a century ago (or more), were to the fore in Fiachra Trench’s new Baudelaire setting, La Musique, and also in his arrangement of the Ave Maria by Vladimir Vavilov  (1925-1973) which is sometimes misattributed to Giulio Caccini (1551-1618). As calling cards for this singer and ensemble both pieces scored a bull’s eye.

Claudia Boyle, of course, was a cellist before she became known as a soprano. And she took up her old instrument again for one of the other numbers in the programme, an arrangement of Astor Piazzolla’s La Muerte del Angel. It’s not often you get the opportunity to witness a soprano who can double up as a cellist.

Rare opportunities were the order of the day in the Irish Composers’ Collective’s ICC SPEAK, Friday’s four-hour takeover of the Irish Architectural Archive’s Georgian premises on the East side of Merrion Square.

I got the wrong end of the stick about the installations which opened the evening. I had anticipated them as being, well, looping installations that you could sample at will and in an order of your own choice.

But, composers being composers, theses turned out to be mostly on the lines of mini-concerts, with specified starting and finishing times. The ones I sampled included Elevated Speech, with soprano Michelle O’Rourke performing to small groups in a lift area (having been ferried up in groups of five at a time); Aran O’Grady’s Tweet Responses,  shaped by live tweets from audience members; Robbie Blake’s Postal Notes, a piece that took shape from instructions communicated by postcards; and Anna Clifford and Veronika Szabo’s In Utero, involving a lie-down in a tent in darkened room, with a binaural recording on headphones that attempted to recreate an in-womb sound environment.

There was also a formal concert, with specially-commissioned texts by poets Afric McGlinchey, Nessa O’Mahony and Victoria Kennefick, each poem set two ways, instrumentally and vocally, by different composers – Shell Dooley, Roisín Hayes, Chris Moriarty-Pearson, Amy Rooney, Richard Hughes and Patrick O’Connor. The idea turned out to be more interesting than the actual music, with Hughes’s pithy Week Eight being the one piece that seemed prepared to take a strong, independent line.

Strong, independent lines were found in abundance at the Jack Quartet’s NCH Kevin Barry Recital Room programme on Saturday. These New York new music specialists offered pieces by Caroline Shaw (Ritornello 2.SQ.2.J, which muses on Monteverdi), the late Peter Rosser (whose Second String Quartet somehow brought to mind the idea of an exploded diagram expressed in music), John Zorn (whose polystylistic The Remedy of Fortune raids musical history with abandon), and Julia Wolfe (whose 1993 Early That Summer now sounds oddly dated). The Zorn so got under one listener’s skin that he exited the moment the piece ended, hurling abuse at both the music and the musicians. Ouch.