Jones played a key role in Memphis’s 1960s soul scene, but his music looks forward, not back 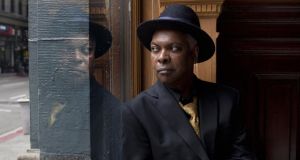 Booker T Jones: ‘New bands don’t have record companies to go to and support them like we did; they can’t just walk down the street and start to play a session at a recording studio’

Measure yourself by Booker T Jones’s standards and you will end up wondering what the hell you’ve done with your life. By the time Jones was 16, he had already mastered a number of instruments, including piano, organ, alto sax, trombone and bass.

“Child prodigy” doesn’t quite cover it. By 18, he had formed The MGs, written their signature tune Green Onions, and released his first album on Stax Records. By 20, he was a regular session musician at Stax, playing and co-writing on records by artists such as Otis Redding and Bill Withers. By 40, his reputation as a musician and producer to be reckoned with was secure.

These days, life has slowed down a little for Jones, but, despite recently turning 70 (he celebrated by going to a 49ers football game), retirement is out of the question. When we speak on the phone from his home near Lake Tahoe, Nevada, he is as ebullient about making music as ever, and unfazed by the prospect of recalling all the old stories that have made his name legendary.

“I’m happy to have a story to tell,” he says laughing, recalling his formative years growing up in Memphis, particularly the early days of Stax. “I didn’t have any indication that the music would last like it did. I just remember feeling fortunate to be in a studio at that age, and to have good work. I was able to get myself into places to perform music that was meaningful to me – especially with Albert King and Bill Withers and Otis [Redding]. It was their music that was so soulful; performing Ain’t No Sunshine with Bill and performing These Arms of Mine with Otis, and Sitting on the Dock of the Bay . . . those are especially pleasurable memories for me. I’ve had a lot of them.”

Jones returned to Stax for the first time since 1971 with his most recent album, 2013’s Sound the Alarm. “It was like coming home, even though the company is in Beverly Hills now,” he says. “They had been trying to get me for a number of years, and I signed with a different label when they first wanted me. But they kept at it, and it was like going home. They all applauded, and I never had that feeling at a record company before.”

The album – as well as 2009’s Potato Hole and 2011’s The Road from Memphis – has seen Jones adapt his style to incorporate contemporary artists. Over the past five years he has worked with bands as diverse as Rancid and Drive-By Truckers and vocalists including The National’s Matt Berninger and Jim James from My Morning Jacket. His 22-year-old son, Ted, plays guitar on the new album, while Bill Withers’s daughter Kori provides vocals. Yet it’s not about surprising people, he says – although he goes on to describe how much he loves Charli XCX and Icona Pop’s I Love It.

“I meet these people at industry events a lot of times; I met a lot of them standing in line for food at the Grammys and places like that,” he says of his collaborators, laughing. “You just never know when you’re gonna meet somebody. I met Gary Clark jnr [who guests on Sound the Alarm] at Apple in Cupertino, doing demos for them up there. You just meet and exchange phone numbers.”

Perhaps it’s that willingness to adapt that has established longevity in Jones’s career. We talk about the internet’s role in the modern industry, which he sees as “a good child and a bad child at the same time”.

“I love it and I hate it,” he says. “It took tons of money from me, and gave me tons of opportunities at the same time. New bands don’t have record companies to go to and support them like we did; they can’t just walk down the street and start to play a session at a recording studio. At the same time, I’m not sure that we’d be having this conversation without the internet. I’m probably gonna go to lots of places that have heard my music, and if the internet hadn’t come along, they might not have had it.”

A spoke in the wheel

Jones has a tendency to play down the role that both the song and the album Green Onions had on Memphis’s soul music scene (“it was one of the spokes in the wheel”, he concedes), as well as that of The MGs, one of the first multi- racial R&B bands in the 1960s. Yet after playing the song for most of his life, he’s still not sick of it.

“It always has been a challenging little pattern for me, ever since I was a young boy,” he chuckles. “To play it the way I feel is correct, and with the right feeling, is never easy. I’m still learning about it. We had this special moment when the tape was running on the original recording, so the goal is always to try to recreate that.”

Since bassist Donald “Duck” Dunn died suddenly in 2012, Jones and guitarist Steve Cropper are the only remaining original members of The MGs. There hasn’t been an album since 1994’s That’s the Way It Is, but he doesn’t rule out working with Cropper at some point in the future.

“I’m not saying never; we’re still in touch and we still talk, and we’re still close,” he says. “It’s just that I’ve been so curious about other things. But he’s still active and he still plays great. When I go to Nashville I see him. You never know what will happen there.”

At 70, the fire in Booker T Jones’s belly remains kindled – but does the ‘legend’ tag become something of a millstone around one’s neck after such a long and successful career?

“Well, to be honest, I never understood it for a long time – and now I’ve kind of simplified it to mean that I’ve lived a lot of years from the time that I started playing music,” he says with a hearty laugh, then pauses to reflect for a moment. “I could get an ego about it, or I could think I’m lucky,” he says, shrugging. “I think I’m lucky.”