Bonnie Tyler: ‘There’s nothing I won’t talk about’

Tyler was a country-rock chanteuse before an operation to her larynx transformed her into the husky queen of the power ballad. She will soon take Total Eclipse of the Heart to Electric Picnic 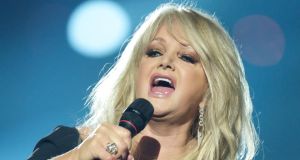 Bonnie Tyler is singing a few bars of Total Eclipse of the Heart just to me. She sings a few times during our 40-minute chat, usually to illustrate moments in her musical life – her mother’s singing, her emotions when she first heard certain songs, how she feels when singing on stage – but the long and short of it is that Bonnie Tyler is singing to me.

She’s a pro, but she’s also a very thoughtful, warm interviewee. “You’re the last interview of the day,” she says, in a Welsh accent that’s imperceptible in her songs. “I don’t mind if you want to go longer.”

She also says: “I wear my heart on my sleeve.” And she does. When she talks about sad subjects, her voice becomes quieter, but when she laughs, she really laughs. The laughter varies from a low, throaty guffaw to an excited, high-pitched squeal.

Tyler, who was born Gaynor Hopkins in a working-class family in the Welsh town of Mumbles, grew up with music. Her mother would sing opera around the house. “She was an incredible opera singer,” says Tyler. “She wasn’t professional, but she was amazing. She was very shy. She’d sing with her back to the wall. When I used to come home from school, I would hear her singing from down the bottom of the road. People used to stand outside the house just to listen to her.

“She was like Maria Callas, you know? She was always singing and always playing records. She had the old 78s until I kneeled on the chair and they all cracked down the middle.”

The “power” in her ballads may come from that early exposure to opera. She loved music. “I learned songs in my bedroom, singing with the hairbrush into the mirror. I still do. I used to carry a bag of records down to my friend’s house every Friday and we’d sit down and play all the records I loved and we’d look at the album covers. That was a big part of it. You’d put the record on the turntable and you’d always find something on that cover that you hadn’t noticed before, or you’d look into [the singer’s] eyes. All that’s gone.”

She began singing in clubs every night and in every conceivable genre. In 1973 she met her husband, Robert Sullivan, a night-club manager and they’ve been married for 41 years.

“[The clubs] were a good apprenticeship,” she says. She was singing in one club when she was spotted by a talent scout. He went back to London and told the songwriters Ronnie Scott and Steve Wolfe about her. This encounter led to hit records such as It’s a Heartache and Lost in France, songs that were not so much power ballads as folk rock.

“I remember going to a club one night when It’s a Heartache and Lost in France had been hits,” she says. “There was a girl before me getting some drinks. She had some pennies in her hands and she says, ‘Here you are, love. You’ll need them before long. You’ll just be a one-hit wonder’.”

This was almost true. In 1976 Tyler had nodules removed from her larynx, and it took her months longer than expected to recover. “I was a naughty girl and wouldn’t stop talking,” she says. When she did recover, her voice was transformed.

“When I hear Lost in France now, I think, my God, is that me?” she says. “I don’t sound like that at all now. I’m much more husky now. That’s through all the singing I’ve done but also because I had those nodules removed. I think they removed a bit too much and I ended up huskier than I was before.”

Her move from country-rock chanteuse to power-pop queen was overseen by Meat Loaf producer Jim Steinman. He didn’t like her previous recordings, she says, but loved her voice. The first time he played her Total Eclipse of the Heart, she cried. “Meat Loaf was apparently very annoyed that Jim gave that to me,” she says. “But Jim said he didn’t write it for Meat Loaf, that he only finished it after meeting me.”

She never gets sick of singing the hits, she says. That said, she has dabbled in other genres over the years (including a Celtic-infused album recorded in Dublin) and she has competed in the Eurovision (scuppered, she says, by “bloc voting”). Every year she tours all over Europe with her husband by her side.

At one point she says that she’s “a private person”, but instantly retracts this. “Actually I’m probably not . . . There’s nothing I won’t talk about.”

She tells me how her mother died of Alzheimer’s 12 years ago and how her father died soon after. “He didn’t want to live after she died. It’s a terrible, terrible disease because you just shut down. Hopefully I’ll never get it. I’d be taking myself off to Switzerland to do myself in.”

Her mother sang, she says, until six weeks before she died. “She couldn’t remember the words, but she’d be singing.” She sings a few lines of an opera tune.

Nowadays, she splits her time between Portugal and Mumbles, and has a big, loving family of sisters, brothers, nieces, nephews, grand-nieces and grand-nephews. When she returned from a European gig the night before our conversation, her house was filled with relatives there to see the local Mumbles raft race.

“They were all sloshed. They’re still asleep all over the house, I’d say. It’s a big house, darlin’. We’re like the Waltons here.”

Tyler has recently returned to rock’n’roll with her album Rocks and Honey, but she is more than happy to be a power-ballad icon. At one point, Total Eclipse of the Heart was voted the number one song for karaoke, and she was sent a free karaoke machine. “It comes out every Christmas,” she says. I ask her whether she’s seen the Literal Video YouTube version of Total Eclipse of the Heart, in which the lyrics are rewritten to describe the endearingly odd Jim Steinman-conceived video. She has, and the line “turn around, ninjas” makes her crack up. She tells me about a Lego version of Total Eclipse. “My Lego head falls off with the line ‘Every now and then I fall apart’.” She sings this, then laughs so hard I worry her head will fall off.

Does it bother her that people’s rediscovered love of power ballads is often presented as a “guilty pleasure”? (For the record: I don’t feel remotely guilty for liking Bonnie Tyler’s music.)

She finds this hilarious. “Well I must be very guilty then, because I love them. No. I’m not guilty at all. And if I’m anybody’s guilty secret, well, go ahead.”

Katie Taylor: ‘Stepping away from my dad was difficult’
7

Kevin Bacon: ‘I was incredibly cocky and unwilling to take any advice’
9