The singer-songwriter recorded his latest album on a marathon 2,728-mile rail journey 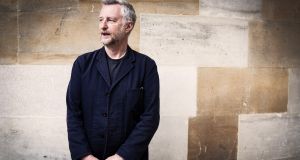 Billy Bragg: “There’s something in our common pop culture about songs about the railroad, in which the railroad becomes a metaphor for aspiration, for heartbreak, for death.” Photograph: Wendy Lynch Redfern/Redferns

In March 2016, Billy Bragg began to get a sense of the America that would put Donald Trump in the White House. He and the singer, songwriter and producer Joe Henry had boarded a Texas Eagle passenger train in Chicago, bound for Los Angeles, carrying two acoustic guitars and a railroad timetable. Over the next four days, they recorded 13 railroad songs on a 2,728-mile route that took them through what the author Greil Marcus termed, “the old, weird America”. Their unconventional recording process saw them leap from the train whenever it stopped to load passengers. Never knowing exactly how long the train would linger, they would quickly chose a spot and record live in waiting rooms or on platforms, all the time listening for the conductor’s call of “all aboard”.

“I saw lots of people’s backyards on that train, more parts of the old weird America than I’d ever seen, because the railway goes through places that were important when the track was laid 120 years ago,” Bragg says. “And on the second leg of the journey, from San Antonio to Los Angeles, the train follows the border with Mexico. It was possible to look out one side of the train and see El Paso and on the other side, Juarez. You could throw a rock from the train into Mexico. I think it was on all our minds that this was where Trump was going to build his wall.”

The atmosphere of that time – with Brexit raging and the US primaries in full swing – has seeped into the resulting album, Shine A Light: Field Recordings from the Great American Railroad. Bragg says the timing of the record was coincidental to outside events. He wasn’t setting out to make a statement, but rather hit on the idea while researching his upcoming book, Roots, Radicals & Rockers: How Skiffle Changed the World. That book, which will be published in June, looks at how Lonnie Donegan’s 1956 version of Rock Island Line kick-started a youth movement in Britain out of which would come The Beatles and the explosion of British pop. Rock Island Line was the first hit of a genre deeply influenced by jazz, blues, and American folk music. It is also a railroad song.

“That got me thinking about American train songs, and the railroad as a metaphor,” says Bragg. “You know, car songs tend to be about driving a car. But train songs are so much more abstract. Think about a song like Folsom Prison Blues by Johnny Cash – that’s actually a train song. The train is the catalyst for the emotions that he’s feeling. It’s not the prison. It’s that lonesome whistle blowing. There’s something in our common pop culture about songs about the railroad, in which the railroad becomes a metaphor for aspiration, for heartbreak, for death. The railroad has an immediate and evocative sense of distance, hope, and fear.”

The railroad also had a transformative effect, a word that has frequently surfaced this year. “Leicester City,” chirps Bragg when I mention Brexit and Trump. “Arguably the strangest, most unbelievable thing to have happened this year was Leicester winning the league,” he adds, the smile evident in his voice.

On one of those extraordinary days – June 24th – Bragg was performing at the Left Field in Glastonbury. I and many others went to watch him, in the hope that he might make sense of the Brexit result as it filtered through.

“That audience was so charged when I came on stage,” remembers Bragg. “They made this noise when I went on that they’d normally make when I finish. I knew that they were really angry about what happened, and they wanted somewhere to come and shout about it, and to feel that they were not the only person who felt this frustration. And that’s the real power music can have – to bring people together who feel strongly about similar issues. That can be very, very important and unbelievably powerful. I know it can, because it happened to me.

“The first political thing I was at was Rock Against Racism. I was working in an office at the time and the language there was casually racist, and homophobic, and sexist. I was the office junior so I never said anything about it. I knew it was wrong, but I never said anything about it because I thought it was just me that felt it was wrong and that I was in the minority. When I went to Rock Against Racism, in 1978, I realised that there was a 100,000 kids like me that felt exactly the same about discrimination of all kinds. It gave me the confidence to stand up for my beliefs when I went back into that office. It wasn’t seeing The Clash at Rock Against Racism that changed my worldview, it was being in that audience . . . That night at Glastonbury felt like that and I just felt privileged to be the lightning rod for it.”

If music retains a power for societal change, then Bragg is among a minority harnessing it. Everything But The Girl’s Tracey Thorn recently wrote on how it is still older artists such as Bragg and Paul Weller who are carrying the flag of protest in the UK. A younger generation are more likely to express societal frustration through a Facebook post than channel that anger through a song. Bragg is frustrated by this, but is quick to point to grime in the UK as full of acts “talking about the pressure that people feel under”, and how Black Lives Matter has “really awoken a huge amount of conscious music in the United States of America”.

‘Music was our social media’

“In the 20th century, music was our social media,” he says. “Music used to be the outlet for discussing love, politics, everything. Now that’s totally dissipated. If people want to feel their voices heard, there’s plenty of places that they can do that. You know, Twitter, Facebook, make a film on your phone, whatever. But if you want to actually connect with people, then music, I still think, has a role to play as a possibility for young people. Songs have more potency than tweets.”

He points to his 2011 song, Never Buy The Sun, which he wrote about the phone-hacking scandal, a disgrace that saw News of the World journalists access and delete messages on murdered English schoolgirl Milly Dowler’s phone, giving her family false hope she might have still been alive.

“The first time that I ever played Never Buy The Sun was in a school playground, at a folk festival in Leeds. I’d written the song on the way up there. There was probably 500 people from the local community there, ordinary people, but it was the week that the Milly Dowler story had broken. And I played this song and they just went crazy. And every time that I sang that line, ‘Scousers never buy the sun’, which is at the end of each verse, they cheered and applauded. And that’s never happened to me before.

“Thinking about what happened, I think that the song had given them the first opportunity as a community to express what they felt about what had happened to Milly Dowler and her family. That was the night that I went and recorded it and put it on to YouTube. Then the next weekend they played it at Anfield before the game. If I’d written a Facebook post about it they wouldn’t have read that out at Anfield before the game.”

When we speak, it is coming to the end of 2016, and we discuss the year in which we lost Bowie, Cohen and Prince. “Unbelievable. Unbelievable,” he says. “My theory is that Bowie was holding reality together, and that his death has unhinged it all. I’m kind of hoping that on New Year’s Day, at a performance of his musical Lazarus – get the reference – he’s going to reappear and say that the whole thing was a dream and that, actually, Chelsea won the Premier League. That’s my hope.”

Lyra McKee: The search for a lost body on Cave Hill
8