An Irishman's diary: a game of two hemispheres

An Irishman’s Diary about a strange afternoon in Clones 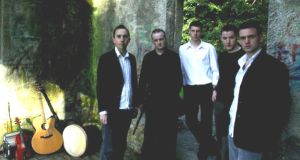 Téada: in concert this evening at the Hiroshima City Bunka

As I now recalled, Paul was the button accordionist with a brilliant trad band, Téada (“Strings”). And it turned out that they were currently touring Japan, from where, having read the piece, he was sending me a picture to confirm that the cherry trees were indeed officially open.

The email also reminded me of my only meeting with the band, some years ago - a slightly embarrassing experience. They had asked me to write the sleeve-notes for a new CD: which required only a paragraph, really, but nevertheless involved listening to the album carefully, several times over, and then distilling its essence into a kind-of prose haiku.

So I did that, or tried. But when I met them at the subsequent launch, something possessed me to make a joke (one of my usual cheap ones) about bodhrán players. Then, sensing a certain frisson in the room, I heard myself blurt: “You guys don’t have a bodhrán player, do you?”

And that was when I was formally introduced to Tristan Rosenstock, the group’s Dublin member and sometime TG4 presenter, who is indeed a bodhrán player and whose percussion played a central role in the music to which I had been listening so closely.

With the neck of a rhinoceros, rather than just get my coat, I then attempted to rescue a situation that was beyond rescue. My only hope lay in the standard criticism of bodhrán players: their alleged lack of subtlety.

By complete contrast, I told Tristan, his playing must have been so beautifully understated as to have only enhanced the rest of the instruments at his own expense. But this was a difficult compliment to pull off. I doubt I succeeded.

Anyway, the message from Tokyo last weekend started a phone-mail correspondence that continued into Sunday afternoon. By then, the band was in Takamatsu: scene of a book I read recently, Haruki Murakami’s metaphysical thriller Kafka on the Shore. I, meanwhile, was in Clones (an equally strange place, at least according to Patrick McCabe).

More specifically, I was watching a football match between Paul Finn’s native county and my own. So I mentioned this mild coincidence in reply to one of his texts, adding the current score-line in case he was interested.

But not only did he know the score already, he informed me that he was listening to the game live on Northern Sound, in a Takamatsu hotel room, in the company of Téada’s Monaghan member, one Sean McElwain.

The latter’s name rang a bell. So, in a live update to Takamatsu, I suggested that, unless memory deceived me, Sean McElwain was a son of Seamus McElwain, a Monaghan GAA official. And that - again, if I wasn’t mistaken - Seamus was the man on the PA behind me: announcing the winner of the half-time draw, the scores from other games, and the whereabouts of a small child that had been separated from her parents.

If so, he had also sung the National Anthem earlier. There was no band in Clones on Sunday, and Big Tom couldn’t be found anywhere. So Seamus had performed Amhrán na bhFiann a capella. At least, I assumed it was Seamus, whose voice I recognised. And yes, sure enough, a text from Takamatsu confirmed the whole McElwain nexus.

In between e-mails, I saw some of the match as well: one of these strange, new-style games that the Black Card rule has spawned. Expressive and free-scoring, it’s barely recognisable from old-school Ulster football, where the keynotes were violence, or the threat of violence, and where double-digit scorelines were considered a sign of weakness.

On Sunday, by contrast, the home team won after a metaphysical thriller involving 34 points and no bad tackles. And in a congratulatory message from the island of Shikoku, my Laois friend added that, by the way, the music on the PA, post-match, was Téada. This had somehow escaped me (I should have recognised the distinctive bodhrán playing).

On the way back to Dublin later, I drove through Carrickmacross where, remembering a fair day once, the poet Patrick Kavanagh wrote about wandering “the Oriental streets of thought”. I knew exactly what he meant now.

While I’m at it, I might as well mention that the same Carrickmacross is host this week to the annual Féile Patrick Byrne, which started last night and climaxes with a concert by the Galway band We Banjo 3 (a four-piece, controversially) on Saturday. Full details at comhaltas.ie/events/detail/feile_patrick_byrne_2014.

Readers in the western Honshu area, meanwhile, are advised that they can catch Téada in concert this evening (Wed) at the Hiroshima City Bunka.