About 1,000 musicians to perform at Cork Jazz Festival 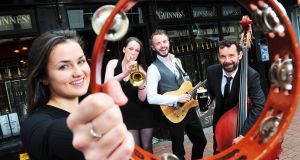 The festival is expected to attract more than 40,000 music fans into the pubs and clubs of the city over the October Bank Holiday weekend.

Now in its 34th year, the festival will see about 1,000 musicians from some 20 countries perform in more than 60 venues around the city from October 28th to 31st.

Guinness Cork Jazz Manager Gemma Bell revealed that blind pianist Justin Kauflin from Maryland in the US will open the festival at the Everyman Theatre in a double bill with contemporary jazz star Jacob Collier from London.

“We also have Grammy Award winner Robert Glasper from Texas as well as jazz guitarist Kurt Rosenwinkel from Philadelphia, who is considered one of the most influential guitarists of his generation, as well as drummer Jason Marsalis of the famed Marsalis family.”

The youngest of the four musical members of the Marsalis family – older brothers, saxophonist Branford, trumpet player Wynton, and trombonist Delfeayo are all acclaimed musicians – Jason revealed he is looking forward to playing the Cork festival.

“We are very excited to perform for the first time at the Guinness Cork Jazz Festival. I’m really looking forward to visiting Cork and playing for the audience there, as well as getting into the city and enjoying the festival for myself,” said Jason.

In addition to other notable jazz performers such as jazz guitarist Sheryl Bailey and hot jazz and western swing trio, The Hot Club of Cowtown, this year’s festival will also feature a Jazz Fringe featuring Big Band Jazz, Jazz on the Plaza and street bands.

For the budding enthusiasts, the Cork School of Music will play host to Jazz Camp during the festival featuring numerous free of charge workshops and masterclasses, presented by many of the performers, she added.

Full festival details can be found and tickets purchased at www.guinnessjazzfestival.com.