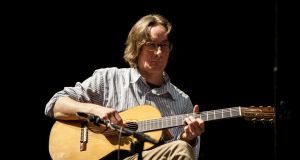 Dave Flynn’s nose for the timely, publicity-friendly, anti-establishment gesture is not to be denied. Photograph: John O’Neill

September’s three-week festival Composing the Island (National Concert Hall, Wednesday 5th to Sunday 25th) was bound to ruffle feathers. It’s a huge celebration of the past 100 years of music by Irish composers. But, even with 27 concerts, there’s no way it could have set out to satisfy everybody.

I’m sure no one is more aware of that than its planners: the executive director of RTÉ’s music groups, John O’Kane; and the chief executive of the National Concert Hall, Simon Taylor.

People were certain to quibble, not just over the names that were included or excluded, but also over the specific works.

There’s not much anyone can do to influence the festival itself, beyond lobbying, hoping for an extra concert or two to be squeezed in or creating a rival or some kind of fringe. Composer and guitarist Dave Flynn has now set about providing a forum for living composers whose noses are out of joint with the massive RTÉ/NCH 1916 centenary survey.

Flynn’s venture will be in the west rather than Dublin, as part of Ceol Meabhair, the Burren Summer Festival of Memorised Music, which he originally set up as the Clare Memory Orchestra Festival in 2013. This year’s festival, in Ballyvaughan, Co Clare, from August 25th-28th, is called Composing a New Island.

The festival has issued a call for works for a new music marathon at the Burren College of Art. It is looking for composers who will perform their own music, and will also welcome improvised performances, electro-acoustic music, sound installations, multimedia performances, street performances, pop-up performances and performers who specialise in 21st-century Irish music. Other proposals will also be considered. The closing date is Wednesday, July 27th.

The festival is encouraging proposals that “engage with the landscape, culture and history of the Burren”, and preference will be given to those that complement Robert Platt’s Dazzling Dissolution exhibition at the Burren College of Art. Preference will also be given to memorised performances – that is, ones that don’t rely on sheet music during the performance, and there’s also a specific request not to send scores with applications, but rather to provide streaming links or use a file-sharing service.

The fine print is intriguing. “We strongly encourage proposals which will help give a balanced, diverse perspective to our programme in relation to gender, race, ethnicity, age, disability, sexual orientation and socioeconomic background,” although the information that would enable applicants to judge what that balance might currently be is nowhere to be found.

The final few cautions are the most bewildering. The festival is not guaranteeing that any proposal will be accepted, nor even that emails will be responded to. It is not offering any fees or expenses. On top of all that, “composers who feature in the RTÉ Composing the Island retrospective in September are not eligible to apply as composers, but may apply as performers”.

The exclusions may bring to mind the kind of fine print you find in insurance contracts, and the idea of ditching the great and famous included in the big survey and inviting in those unfortunate enough to be excluded – once they’re prepared to pay their own way – falls somewhere between the quixotic and the satirical. You just couldn’t make it up. On the other hand, no matter what Flynn’s expectations actually are, the man’s nose for the timely, publicity-friendly, anti-establishment gesture is not to be denied.

Only composers born in Ireland or resident here will be programmed in the Burren festival. The opposite perspective seems to apply at Kilkenny Arts Festival, where director Eugene Downes has been rehabilitating the festival’s music strand, with a major focus on Beethoven in 2014, Bach in 2015 and Mozart this year.

The Irish Chamber Orchestra surveys late symphonies, the Sinfonia Concertante for Violin and Viola (Katherine Hunka and Joachim Roewer) and the Clarinet Concerto under Gábor Takács-Nagy and Jörg Widmann, with Widmann on clarinet as well as conducting on Friday 5th and Sunday 7th.

And the orchestra is joined by Mark Duley’s choir, Resurgam, and a team of soloists headed by John Mark Ainsley for concert performances of the opera Idomeneo under Christian Curnyn on Thursday 11th and Saturday 13th.

Other composers do get a look-in in a week that features more than 60 pieces of music. Bach is there, with solo violin works from Alina Ibragimova (Tuesday 9th, Wednesday 10th), and cantatas from Mark Padmore and Camerata Kilkenny (Friday 12th). Violinist Maya Homburger and bassist Barry Guy celebrate the Hungarian composer György Kurtág (Tuesday 9th), and the great Hungarian pianist Andras Schiff offers the penultimate sonatas of Mozart, Beethoven Haydn, and Schubert (Saturday 6th).

What’s missing, you might ask? Well, the Irish composers. Kilkenny has so far shunned the opportunity of commissioning native creative talent to engage with the worlds of the great masters the festival is focusing on, or even of featuring existing works that do that. A major opportunity is being missed.