A series on great symphonies searches for meaning in music

In the first Great Symphonies Close Up concert, Charles Hazlewood explores Dvorák and shows a flair for the apt metaphor 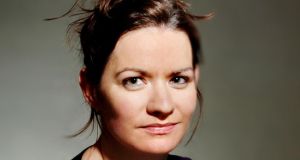 ‘Beloved on the Earth’ by composer Linda Buckley, above, is an evocative, subtly coloured piece that is consistently engaging

Charles Hazlewood’s words, at the National Concert Hall last Tuesday lunchtime, echoed down the week. Introducing the first of his four Great Symphonies Close Up concerts (the others will be later this month, and in February and May), he declared that one of music’s most remarkable properties is its ability to tell stories, even though how you receive or create the story is up to you. So I found myself returning to the old question of whether musical meaning can ever be nailed down. Many have tried. There is even a respected academic publication called the Journal of Music and Meaning. All the evidence suggests that elusiveness of meaning is central to music’s power.

Dvorák wrote his New World symphony in the early 1890s, when living in New York and working as director of the National Conservatory of Music. Hazlewood drew on the composer’s documented comments: the contrasts between him missing his European homeland and his excitement at experiencing this new land of opportunity.

The RTÉ National Symphony Orchestra played well-chosen extracts that might, Hazlewood suggested, be musical expressions of his inner life; and he showed a flair for the apt metaphor, such as when he suggested that the varied recurrence in the last movement of an earlier idea was, perhaps, “breathing a sense of reassurance as well as symphonic cohesion”. He made this seasoned listener think afresh while hearing the spirited and characterful, if sometimes unsubtle, performance of the complete symphony.

Friday’s orchestral concert, in which the RTÉ NSO was conducted by Gavin Maloney, included the first performance of Linda Buckley’s Beloved on the Earth, commissioned by RTÉ Lyric FM. A setting of three poems by Raymond Carver, and scored for orchestra and eight-part choir, it is replete with technical challenges. The choir sings unaccompanied for 39 bars, and when the orchestra enters, everyone hopes they have held pitch. The RTÉ Philharmonic Choir held it pretty well, and gave a good account throughout.

This is the work of a composer who loves sound-colour, whose word-setting seems less concerned with the declamatory moment than with aesthetic ideas that suit the local tone of the poetry – although the words can always be heard. I was not convinced by the presence of a quite long section for orchestra towards the end, and also wondered if the piece would have benefited from a more flexible performance. Nevertheless, I found this evocative, subtly coloured piece consistently engaging.

It was unfortunate that subtlety was almost entirely absent in the piece that followed. In Tchaikovsky’s Piano Concerto No 1, the demands on the soloist’s technique and stamina are legendary. On this occasion, Gabriela Montero’s remarkable technical abilities seemed squandered because warmth, pathos, elegance and other subtleties were trumped by relentless drive, persistently high volume and little variation in colour. She is well-known as an improviser, and for an encore she drew on a theme sung by a member of the audience, putting it through a range of technical and stylistic procedures that showed a striking, if somewhat formulaic, ability to wring a lot out of the material.

The last work in this concert brought me back to the ideas Charles Hazlewood had spoken three days earlier. Rimsky- Korsakov’s oriental fantasy Scheherazade tells its story with a literalism that inevitably dictates. But it does so with such vivid command of material and of orchestral colour that it persuades, especially in a performance so full-blooded and nicely hued, including the many orchestral solos and an especially intense account of the concluding storm at sea.

On Thursday and Saturday, in the Pavilion Theatre, Dún Laoghaire, Glasthule Opera presented a triple bill of short comic operas. I saw the Thursday performance, and was immediately struck by the pleasing illusion of perspective that the back-projected scenery lent to the boxy stage area. The band of about 12 players, conducted by David Brophy, was reliable, and the two English-language translations – always a special challenge in comic opera – were convincing. Each work called for just three or four singers, most of whom were well-cast and evenly matched.

The longest work was Wolf-Ferrari’s Susanna’s Secret of 1909, which was well done by all concerned, although I did wonder if it might have benefited from some more contrasted pacing between its successive short scenes. I was especially struck by the effectiveness of Raphaela Mangan’s singing in the lyrical neo-classicism of Barber’s 1953 miniature, A Hand of Bridge, and above all by Sarah Shine’s acting flair and natural musicianship in Offenbach’s Le 66 – a gem from one of the greatest comic-opera composers of all time.

The week’s musical highlight was the concert in the NCH on Wednesday, given by the Royal Liverpool Philharmonic Orchestra and its chief conductor, Vasily Petrenko. It opened with a classic example of music that tells a story, Wagner’s Tannhäuser overture and Venusberg Music, which was followed by a scintillating account of Glazunov’s Violin Concerto, with Ning Feng as the soloist.

So strongly characterised were these performances, via the orchestral playing and Feng’s remarkable ability for effortless lyricism and virtuosity, that these two pieces seemed to present a whole concert’s worth of musical experience. The second half opened with Stewart Copeland’s delightfully dotty and engaging percussion concerto Poltroons in Paradise, memorable for its four soloists clad in Day-Glo green jackets, and for inventive music and strong performance.

No wonder this combination of conductor and orchestra has attracted widespread praise. The entire concert, but especially a wonderful account of Tchaikovsky’s Capriccio Italien, revealed Petrenko as a conductor whom musicians find liberating. He seems not so much to direct as coordinate, not to dictate but to facilitate understanding. He makes it look easy, which it is not, and that’s part of the secret. I don’t think I have ever heard this piece presented with such a vivid combination of expressive precision and spontaneity.