A golden year for music when Irish acts did the business

Musicians, labels, promoters and fans can all take credit for a perfect storm of factors that made 2014 a special year for music 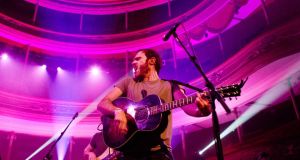 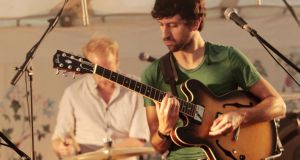 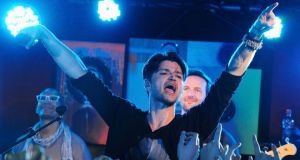 In the Irish music industry, 2014 will be remembered as a golden year. Now I know you’ve heard that before, but this year has been exceptional. While the Irish music scene, especially in live terms, has always been vivacious and eclectic, 2014 was the year the business got done. Hozier was, of course, the massive breakout success of the year, but while his never-ending victories will no doubt focus a brighter spotlight on Irish acts, there were plenty of other wins for Irish artists this year.

That success has been compounded by a flush of record labels snapping up Irish acts. The Coronas have been trucking away for years here, creating an impressive fan base in a small country, and now Island has signed them.

Even hardened underdogs on the scene caught a break. Delorentos, who won the Choice Music Prize in 2013 for the quietly majestic Little Sparks, signed a deal with Universal for their fourth album, Night Becomes Light. Kerry band Walking on Cars signed to EMI/Virgin. Soak, a teenager from Derry, signed with Chvrches’ label Goodbye Records.

Of course, the big news was Hozier (Rubyworks/Columbia/Island), who is closing his year with a Grammy nomination for Take Me to Church. Don’t think there won’t be others either, as Andrew Hozier-Byrne has another year to build towards next year’s awards.

One of the records of the year is James Vincent McMorrow’s Post Tropical, and McMorrow has been touring non-stop. An act less inclined to the road, The Gloaming, have injected a new energy into traditional music, winning unlikely fans from all quarters with their debut.

High-energy electronic act Le Galaxie are waiting in the wings to blow up, having created a large fan base in Ireland due to their brilliant live shows. All they need now is the industry framework to expand their platform.

All Tvvins will be one of the acts of 2015, as the phrase “doing a Two Door Cinema Club” is being uttered in their presence. The band, whose members excelled in Adebisi Shank and Cast of Cheers, were one of the festival acts of the summer. It’s been enthralling to watch a new act command the scale of main stages without so much as an album to sell.

Cloud Castle Lake are probably the most interesting band in the country right now, with incredibly sophisticated and cerebral music. Several other Irish acts have also spent 2014 laying the groundwork for greater things. While Little Green Cars (Glassnote/ Island) failed to light up the European charts as much as they should have, their persistence in the US should reap dividends come their second album.

Heathers have found a new fan base in Canada. Fight Like Apes are awaiting the release of their third album, having parted ways with the label Rubyworks. And The Minutes are more forceful than ever.

For more mainstream rock, the only way is up. Kodaline (Sony) continued their remarkable ascent and are now heading into the cycle of a second album.

The Script (Sony) sold out Croke Park, which is a phenomenal achievement, while Hudson Taylor (Polydor) are also ticking along nicely in the UK.

On the more alternative and electronic end of the spectrum, Mmoths has continued to intrigue with his latest work. Elaine Mai is developing into not just a great solo act but a fine remixer. Daithi, whose debut album was released this year, has the pop and live credentials to impress internationally, and the evolving production ability.

Bleeding Heart Pigeons, from Limerick, signed to Virgin, while Berlin-based Kool Thing have a much anticipated second album in the bag, and have started a new house music label, My Haus. Their latest track features Katie Stelmanis of Austra.

Jape is back with a new bag of tunes, too, as is Kormac’s Big Band.

Girl Band, a challenging, brilliant grungey band, signed with Rough Trade. The label also signed a distribution deal with The Mighty Stef, after years of hard work and development. Acts such as Girls Names, Kid Karate, So Cow, Meltybrains?, The Notas and Maud in Cahoots are also in flying form. With a bit of graft and development, Youth Mass and Acrobat also have the potential to catch the eye of majors.

Spies showed a new maturity while supporting All Tvvins at Whelan’s recently. Somerville also had a great year, and although her music insinuates a slow burn, there’s something immediately exciting about the texture of her sound.

In hip hop, Lethal Dialect released one of the Irish records of the year, 1988. Temper-Mental MissElayneous gained new fans not just with her consistent verbal dexterity, but also with her insightful contribution to RTÉ reality show Connected. God Knows and MynameisjOhn are also well worth a look.

It’s now a given that local bands can break out of Whelan’s and perform in the bigger venues: Delorentos at Vicar Street, Ham Sandwich at the Olympia, Kodaline at the 3Arena, Le Galaxie in Meeting House Square. Festival tents were packed for James Vincent McMorrow at Electric Picnic, for Raglans and The Strypes at Sea Sessions and for Damien Dempsey at Indiependence. Tickets for Hozier’s show at the Olympia recently were being sold by touts outside for six times their original price.

The Riptide Movement rocked Glastonbury for the second year in a row, while a band that took off in Ireland before going international – Rodrigo y Gabriela – played the famed Pyramid stage at that festival.

First Music Contact steers the Breaking Tunes online platform for Irish bands, the Dublin music festival Hard Working Class Heroes (where labels flocked to see Hozier last year) and the Music from Ireland initiative, which brings Irish acts to South By Southwest, Canadian Music Week and Eurosonic. First Music Contact chief executive Angela Dorgan says 2014 was “a perfect storm” with many contributing factors. “The biggest is the rise of great bands,” she says. “It’s incredibly healthy and the last 10 years have come to a head in a way. Another thing is purse strings have loosened at indies and majors. And that is combined with the fact that there’s also a new confidence. You expect [success] rather than be grateful for it.”

It’s not just front of house either. Producers, music video directors, labels and crew are also upping their game. Let’s hear it for Rob Kirwan, whose beautiful touch was lent to the Hozier record and two from Delorentos. Brendan Canty’s Feel Good Lost company was behind the Take Me to Church video. Independent label Popical Island has been pumping out fantastic releases and gigs. This current generation of musicians can’t help but inspire the next.

There’s also another component that has made Irish music excel this year: the fans. So, for every person who bought a ticket to a hometown show, or packed a festival tent for a local hero, or spent their money on Irish releases, or blogged about their favourite new Irish act, it’s been a great year. Keep up the good work.