A bumpy journey through Bach masterpieces at Kilkenny Arts Festival 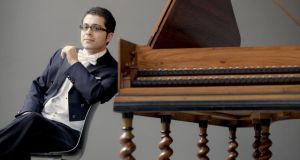 Mahan Esfahani, who was born in Tehran in 1984, makes music like someone who has an old head on young shoulders. Photograph: Marco Borggreve

Kilkenny Arts Festival’s Eternal Harmony: The Music of JS Bach got off to a sticky start on Friday. It was a clammy day, and even damper in the interior of St John’s Priory than outside.

The soundboard of the harpsichord for Iranian-American harpsichordist Mahan Esfahani’s lunchtime recital began to buckle from the amount of moisture it was absorbing.

Heaters and hairdryers came to the rescue, and, three-quarters of an hour behind schedule, Esfahani was able to begin Kilkenny’s 10-day, nearly 24-hour journey through the masterpieces of Bach.

Esfahani, who was born in Tehran in 1984, makes music like someone who has an old head on young shoulders. He played the first book of the Well-Tempered Clavier over two recitals as if there were nothing to be shown except the music itself, at once abstract and concrete, sober and flamboyant,

He spoke briefly before his first concert and later gave a talk, Bach and the Chain of Being, and seemed a lot younger when he spoke, as if both dazzled by his own intellectual agility and a little too concerned to make an impression. The question-and- answer session after the talk brought out the best in him, showing him as quick-thinking, open-minded and musically alert.

Friday evening brought the first and most unusual of three festival performances of Bach’s Goldberg Variations. The German ensemble Sax Allemande has made an arrangement for saxophone quartet. Arrangements of the Goldbergs are not new. Dmitry Sitkovetsky’s version for string trio, which he made for the Bach anniversary year of 1985, has taken on a life of its own. In recent years the piece has also been recorded on harp and marimba.

Sax Allemande’s version was at the opposite end of the musical scale to Esfahani: rough in delivery, uneven in phrasing, inconsistent in contrapuntal balancing. The Kilkenny audience loved it, and gave it a standing ovation. I found it about as stimulating as an hour-long video of a dog walking on its hind legs.

The real highlight of the first weekend came on Saturday evening, when Chamber Choir Ireland and Camerata Kilkenny joined forces under Paul Hillier for a performance of the Mass in B Minor at St Canice’s Cathedral. The musical approach was gentle and luminous, the full richness of this extraordinary musical score laid out with exemplary clarity, everything in view, nothing obscured.

The vocal soloists were drawn from the 18 voices of the choir, so the tone was much lighter than is usual in this work, the delivery less pressured. There were some moments when the solo singing was less than ideally refined in detail, but the gain from the overall cohesion of the musical vision more than compensated for these. It was, in short, the kind of performance to make you fall in love with this great music all over again.

The Hungarian cellist István Várdai has been a favourite with Irish promoters in recent years. He has appeared at the West Cork Chamber Music Festival, in concertos with the Irish Chamber Orchestra, and on a tour with pianist Finghin Collins. In Kilkenny he showed exceptional dexterity in the first, fourth and fifth cello suites of Bach, and an ability to keep the dance on track at moments when many other players apply the brakes for security.

The weekend’s big-name visitors appeared on Sunday night, when William Christie’s Les Arts Florissants made their first Irish appearance since the early 1990s. The highlight of their programme was a secular cantata, number 211, Schweigt Stille, Plaudert Nicht ( Keep Quiet, Don’t Chatter), the so-called “coffee” cantata. The soloists – soprano Rachel Redmond, tenor Reinoud Van Mechelen and bass Andrew Foster-Williams – made the most of this tale of a coffee-loving daughter outwitting the attempts of her father to get her to give up her addiction. It was the most musically pointed performance in an evening where the delivery seemed mostly rather undercooked – polished and musicianly, yes, but, with the exception of Antoine Torunczyck’s penetrating obligato oboe in cantata 202 (the “wedding” cantata), somehow lacking expressive traction.

There is, of course, music other than Bach’s at Kilkenny this year. The Watergate Theatre saw the first performances of Tom Creed’s new Opera Theatre Company productions of Poulenc’s The Human Voice and Wolf-Ferrari’s Susanna’s Secret.

It’s a chalk-and-cheese pairing, one work tragic, the other humorous, linked, as Creed points out, by the centrality of a lie. The two works, presented separately in Kilkenny, will tour as a double bill in November, and the set is the same for both.

Creed and his set designer, Ciarán O’Melia, have chosen a backstage setting, on which the despairing unnamed woman in the Poulenc (Kim Sheehan) communes with her ex-lover through a smartphone, and which, in the Wolf-Ferrari, gives the silent servant Sante (Ian Whyte) plenty to occupy himself as a stagehand.

Soprano Kim Sheehan sang powerfully and movingly, the best I’ve ever heard her. But I couldn’t quite work out why Creed dispensed with as powerful a prop as an old-style, landline handset.

And, in spite of Michael McHale’s Herculean efforts, the reduction of the orchestra part to solo piano was a severe loss.

The setting worked well in the Wolf-Ferrari, with Rachel Croash (Susanna) and Rory Musgrave (her jealous husband, Gil) making a lively couple and both spending time singing from the centre of the stalls. The froth of the music was also well conveyed by the piano trio of Lynda O’Connor (violin), Aoife McDonagh (cello) and Andrew Synnott (piano).