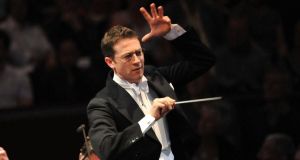 John Wilson: ‘takes the players of the RTÉCO to a new level of responsiveness. They sound like a better band when he is in charge’

There is nothing like competition to keep people on their toes. Or so we’re told. But when it comes to the larger end of the orchestral repertoire in Dublin, RTÉ is a local provider that has the field to itself. Yes, there are international comparisons to be made through the visiting orchestras that the National Concert Hall promotes – next up is the Bournemouth Symphony Orchestra on March 27th. But there are differentiations involving both artists and ticket prices that mean the RTÉ orchestras and the visitors serve audiences that are quite well differentiated.

Given its monopoly position, RTÉ has been free to treat its own two orchestras, the RTÉ National Symphony Orchestra and the RTÉ Concert Orchestra, as complementary groups rather than competitors. Yes, the NSO does stray from time to time into one of the RTÉCO’s core areas of music from the movies, and the RTÉCO has always dabbled in the core classical area that is the NSO’s speciality.

Whatever the reason, the RTÉCO has never managed to establish itself as a real force where core classics are concerned. When Laurent Wagner became the orchestra’s principal conductor in 2003, one of his wishes was to perform Mahler’s Fourth Symphony. But RTÉ regarded that as a step too far into the NSO’s territory, and the programming of the classical series that Wagner undertook at The Helix was of a character that meant it was doomed from the start.

There’s a new game-changer on the scene now, in the form of the RTÉCO’s new principal conductor, John Wilson, a specialist in all things to do with Hollywood and the musicals, who has chosen to boldly go where no RTÉCO conductor has gone before. He’s taking the game to the NSO by going straight to the heart of the orchestra’s most popular repertoire. And he is doing it with a touch of class and a consistency neither David Brophy nor Proinnsías Ó Duinn quite managed when they were at the orchestra’s helm.

Take the Essential Classics programme that Wilson conducted at the NCH last Thursday: Rossini’s William Tell Overture, Debussy’s Prélude à l’Après-midi d’un Faune , Rachmaninov’s Second Piano Concerto with Leon McCawley, Lehár’s Gold and Silver Waltz, Barber’s Adagio, and Stravinsky’s Firebird Suite. It’s a kid in a toy shop jumble of goodies, and Wilson conducted it all with a sense of engagement and enjoyment, as if he were seeing it that way too.

He takes the players of the RTÉCO to a new level of responsiveness. They sound like a better band when he is in charge, with the strings in particular showing nuances of shade and colour and a heart-warming expressivity that other conductors never quite manage.

The dangerous cello solos of the William Tell Overture were beautifully done. McCawley showed easy command in the Rachmaninov concerto. And the second half was finer still, the Lehár lovingly detailed, the Barber deeply touching but not sentimentalised, and the Firebird Suite a colouristic delight.

The NSO were at the same venue the following night, playing Saint-Saëns’s Danse macabre , Liszt’s Second Piano Concerto (with Nareh Arghamanyan) and Berlioz’s Symphonie fantastique under Swedish conductor Patrik Ringborg, whose effect on the NSO is akin to Wilson’s on the Concert Orchestra. He took as much care with the Danse Macabre as if it were a mesmerising orchestral tour-de-force by Berlioz. Arghamanyan manifested a young person’s, no-holds-barred grip on the Liszt, showing herself excitingly capable of fully meeting her self-set goals. And the Berlioz was a pleasure from beginning to end, fresh and imaginative in the timeless way that is one of this composer and this work’s special features. Played like this, it sounds somehow as new as if it had been written yesterday.

It is likely to be to everyone’s benefit if the two RTÉ orchestras are allowed to compete on the same musical terrain.


Dennehy’s New Music Dublin
The music of that metaphorical yesterday, and of the few weeks before it, are the subject of the New Music Dublin festival, which starts at the NCH on Thursday, this year with Crash Ensemble’s Donnacha Dennehy as artistic director.

Dennehy sees the festival as “an opportunity to introduce Irish audiences to some of the most thrilling and interesting new music composed in recent times”, and chose to use the opportunity to include works by composers who are “not very often heard in Ireland”.

Top of the list he names: Georg Friedrich Haas, whose Third String Quartet will be performed entirely in the dark by the Arditti Quartet; Hans Abrahamsen, whose hour-long Schnee (Snow) gets a late-night performance from Crash; the short-lived Canadian Claude Vivier (1948-1983), whose Lonely Child for orchestra closes the festival; and Harrison Birtwistle, whose Earth Dances is the sole work in the RTÉ NSO’s lunchtime concert on Friday.

Birtwistle is in town for a new music conference at TCD, and will take part in a post-concert discussion with TCD’s Evangelia Rigaki. Public discussions abound, and will feature Bob Gilmore on Vivier, an audience with Hans Abrahamsen, panels on Stockhausen and Kraftwerk (both of whose work features in festival concerts), and an exploration of “How emerging composers engage with their public”, a hot topic for anyone seeking to exploit the distribution of music over the internet.

The most intriguing title of the festival is Michael Gordon’s Rewriting Beethoven’s 7th , which opens the final concert and, cheekily, does what it says on the tin.


New Music Dublin festival runs from tomorrow to Sunday at the NCH, 01-4170000. For a video with Crash Ensemble, see irishtimes.com/culture

Versatile Dublin rappers: I'd like to thank all the smack heads on Abbey Street
8