The author’s depiction of the leaders of the 1916 Rising is analytic and dispassionate, and it avoids glorification or condemnation 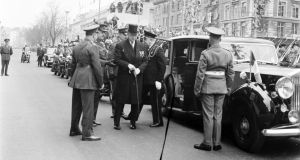 Recalling the Rising: President Éamon de Valera at the commemorations of the 50th anniversary of 1916, where the atmosphere was largely one of uncomplicated celebration. Photograph: The National Photographic Archive 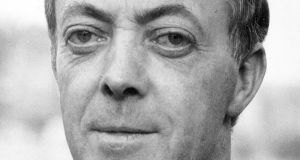 Eoghan Ó Tuairisc liked to remark that his father was “out” in 1916, but not in the GPO. In fact his father, a cobbler in Ballinasloe, where Ó Tuairisc grew up as Eugene Rutherford Watters, was in the Connaught Rangers, and was wounded in the Battle of the Somme. This family history feeds in to the remarkably nuanced account of the Rising in Ó Tuairisc’s historical novel, Dé Luain, that focuses on the 12 hours leading up to the reading of the Proclamation of the Republic by Patrick Pearse on Easter Monday. Though Ó Tuairisc belonged to a generation brought up to consider 1916 a sacred event (he recalled in 1981 having been inducted into “the faith of Pearse” from his first day in primary school), his depiction of the 1916 leaders is dispassionate and analytic, and avoids either glorification or condemnation.

This would have been a fine achievement at any time, but it was especially significant in 1966. The atmosphere of the official commemorations of the 50th anniversary – a large military parade, the renaming of 15 major train stations in honour of the 1916 martyrs, a pageant in Croke Park, Telefís Éireann’s you-were-there style drama series Insurrection – was very largely one of uncomplicated celebration. The RTÉ Authority, for example, vetoed plans for a TV production of Sean O’Casey’s The Plough and the Stars (see 1926) to be broadcast during Easter week. Ó Tuairisc’s cool and complex retelling suggested that there was room for more thoughtful approaches.

Ó Tuairisc worked as a primary school teacher from 1940, mostly in St Canice’s Boys’ School, Finglas. In December 1960, he resigned his position to devote himself full-time to writing. Though equally comfortable writing in English, it was as an Irish-language author that he came to prominence with the publication of the historical novel L’Attaque (based on the French military mission under Gen Humbert in 1798), and the poetry collection Lux Aeterna (1964), which included his most celebrated poem in Irish, Aifreann na Marbh, a response to the bombing of Hiroshima. The long dramatic poem in English, The Week-End of Dermot and Grace, also inspired by what he termed “the post-Hiroshima era” and published at the same time as Lux Aeterna, appeared under his English name.

This dualism carries over into Dé Luain where the tercentenary of the death of William Shakespeare on Easter Monday 1916 is given due acknowledgement.

Indeed, a feature of the novel that has impressed readers and critics since its first publication is its very thorough depiction of the diverse cultural and political strands involved in the Rising.

Ó Tuairisc gives special attention to the roles of James Connolly, the Citizen Army and the labour movement; to women (Elizabeth O’Farrell, Kathleen Lynn, Helena Moloney, Winifred Carney and Rosie Hackett all appear, as well as Constance Markievicz); to the Dublin theatre movement (Sean Connolly and Helena Moloney presented as actors); to teachers (Thomas MacDonagh, Éamon de Valera, Pearse); to the role of northerners (Eoin MacNeill who countermanded the Rising, Bulmer Hobson, who opposed it, Sean McEntee who took part in it); and to the mixed personal backgrounds of many of the protagonists, including Pearse.

One gets a sense throughout the novel that the Rising was the culmination of a period of intense politicisation and cultural activity. However, the ambiguity at the heart of the Rising – apparent in the novel’s title which invokes the Irish Lá an Luain (the Day of Judgment or the last day, considered to be a Monday in Irish tradition) – is never hidden from the reader and is regularly addressed, particularly in the depiction of Pearse and Connolly as tragic actors who knew that the Rising as a military event was doomed from the outset.

You can read more about Eoghan Ó Tuairisc in the Royal Irish Academy’s Dictionary of Irish Biography; ria.ie