Modern Ireland in 100 Artworks: 1919 – The Signing of Peace, Versailles, by William Orpen

William Orpen’s great painting is a work of supreme ambivalence, both memorialising and questioning the first World War and what would be a highly problematic peace 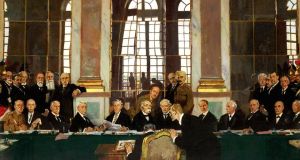 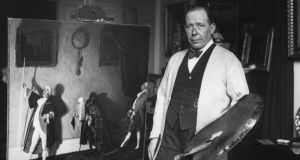 After the 1916 Rising William Orpen’s pupil and protege Seán Keating tried to persuade his master to return to Ireland from London and lead a revival of Irish visual art. Instead Orpen decided to stay in England. A child prodigy admitted to Dublin Metropolitan School of Art at the age of 12, Orpen had gone to the imperial capital to study at Slade School of Fine Art, and he quickly became a highly successful and fashionable society portrait painter.

But staying in London was not a soft option: as Maj Sir William Orpen he had gone to the Western Front as an official war artist. His work on the front line, documenting the tragic life of the ordinary soldier, and his less circumspect paintings of French girls caught up in the war, hugely expanded his artistic range. An exhibition of 125 of his war paintings was shown in London, Manchester and the United States in 1918 to great acclaim and was visited by Queen Mary.

As a result Orpen received a lucrative commission, worth £3,000, to paint three huge pictures of the Paris Peace Conference, held at the Palace of Versailles, for the Imperial War Museum. Out of it he made works of supreme ambivalence, at once memorialising and questioning both the war and what turned out to be a highly problematic peace.

For The Signing of Peace Orpen avoided the throngs of politicians, diplomats and military personnel in the palace’s Hall of Mirrors to concentrate on a group portrait of the political leaders. His great knowledge of art history led him to capture the leaders as they sat behind a long table, as Leonardo da Vinci had posed his figures for The Last Supper, with the central and supporting groups of figures framed by the three mirrored arches.

Like Leonardo, Orpen breaks up the monotony of the unbroken line of table with a chair and two figures in front, but the real drama comes with the fractured reflections of the windows and the sky beyond, suggesting the frailty of the agreement negotiated below. The very order they are putting in place is distorted in the mirrors that reflect them. In a technique drawn from Orpen’s great hero, Rembrandt, he uses the towering architecture to suggest the vanity and insignificance of the world leaders, who occupy little more than a quarter of the composition.

These doubts were taken even further in Orpen’s last painting from Versailles, To the Unknown British Soldier in France. Having spent nine months meticulously painting the statesmen in the Hall of Peace, Orpen then erased them because, as he explained in 1923, “I couldn’t go on. It seemed so unimportant somehow beside the reality as I had seen it and felt it when I was working with the armies.” He replaced them with a coffin flanked by two spectral figures of mad, shell-shocked soldiers. This painting was rejected and the figures were themselves eventually painted out by Orpen. Perhaps the greatest Irish visual response to the Great War had no place in Irish or British culture.

the Royal Irish Academy’s Art and Architecture of Ireland, at ria.ie