Mercury-prize winner on perseverance, lockdown and his latest album 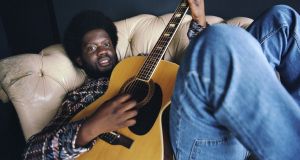 The Covid crisis has given Michael Kiwanuka time to ruminate over the next album which he again hopes to record with Danger Mouse and Inflo. Photograph: Olivia Rose

They say things happen for a reason and when it comes to Michael Kiwanuka’s career, they’re right. When he arrived on to the music scene in a quiet bluster in 2011 with Home Again, a scene-setting debut album that pulled at the fabric of 1970s blues/soul, it proved powerful enough to capture the attention of Mercury Prize judges. Just not quite enough to stop Alt-J from taking the award for An Awesome Wave.

That near-miss spurred him on to dig deeper. And then came 2016’s Love & Hate, a confident affair that bowled critics over. When he lost out again, this time to Skepta’s momentous Konnichwa, “I was disappointed,” he says speaking from his Hampshire home. “You’re always happy to be on that list but there was a part of me that believed I made a pretty good album. But looking back now, I’m glad I had to keep going and pressing to delve deeper into my artistry and into what I was trying to do and say.”

The extra drive paid off abundantly. Kiwanuka, released in late 2019, was arguably his most expressive collection yet, both timeless and timely, personal and universal. Centred around identity and self-acceptance, Kiwanuka feels like a storyteller’s third act in which the protagonist overcomes self-doubt, does away with the need for external validation and, as it turns out, gets a happy ending because of it.

In September, while hunkering down at home, Kiwanuka learned (through the official announcement on BBC’s The One Show) that he had won the 2020 Mercury at last. And unanimously too.

“Looking back, I’m glad it was this one because of what it’s about and the way it sounds and where I am in my career,” he says. The theme of self-acceptance, which defines the album, “was about being a singer, songwriter, an artist, being a black singer, an artist and also making the music that sounds a bit left of centre. Halfway through making this album I basically decided to serve up everything that was unique about it.”

That’s exactly why the album bears his surname, though a secondary aim was about “getting my name to not be seen as a difficult name or something that looks or sounds weird or exotic”. So while others such as Elton John adopted stage names, Kiwanuka’s decision to keep his own is alluded to in the album, especially in the introduction to the epic centrepiece Hero, which was inspired by Black Panther martyr Fred Hampton but expands to the topic of musical icons: “I won’t change my name/ No matter what they call me”.

His Mercury proved to be worth the wait. On the back of the announcement, Kiwanuka enjoyed a 4,537 per cent rise in sales and an 800 per cent increase in streams as well as the tick-boxes enjoyed by those in the higher echelons of musicdom: the Graham Norton Show appearances, a Later...with Jools Holland special and the like.

It’s an indication that he’s moved to the mainstream after years of being a revered left-of-centre artist. Born in north London to Ugandan parents, he began his musical career as a session guitarist for Labrinth while also dabbling in various bands. It was only when Paul Butler of The Bees brought Kiwanuka to his studio that his sound, harking back to the soul of Sly Stone and Bill Withers, began to take shape.

His first major tour was to support Adele in Europe and he won top place in the oft-cited BBC Sound of 2012 list, which charts those new artists the music industry predict big things for each year.

The promise came good with Home Again, but it was with Love & Hate that things really began to take shape. With Danger Mouse and Inflo producing alongside Butler, it spawned Cold Little Heart, an evocative song that took on a new life and found a new audience when it was used as the theme tune for the HBO series Big Little Lies. That magical Danger Mouse/Inflo collaboration continued with Kiwanuka.

But if winning the Mercury Prize was a career highlight of 2020, the fallout of the coronavirus crisis was a lowlight, not least because it held Kiwanuka back just as he had found  his stride.

“Obviously loads of tours were getting cancelled and the festivals are having to stop because of the pandemic. That was on top of the general feeling of the global pandemic and what that does to life. It’s a pretty difficult time, not being able to hug anyone and feeling trapped,” he says.

“I’ve tried to be creative at home, but there were times when we first were locked down that I forgot I was a musician. There were no studio sessions, there’s still no touring and you were just twiddling your thumbs, trying [to keep] yourself busy. I miss being around other musicians and creatives to keep you excited about everything.”

He’s aware that this level of fallout is reflective of his established position. For newer artists, those who were pushing to make headway in the industry before it was shut down, this fallow period might prove to be more ruinous. It’s not helped when the UK government is encouraging those in hard-hit industries to retrain.

“I disagree with that,” he says. “What people don’t really understand about being a creative is that you can be at a stage where you’re able to earn a living or you could be at that beginning stage, but it’s something you have to do. It affects your mental health if you don’t. If you’re a creative or artist, you don’t try and be that, you just are. That’s why in lockdown you try to do other things and keep busy, but you hit a brick wall and feel low because you’re not doing the activity you’re supposed to be doing.”

It’s perhaps this feeling that’s led him to decide what to do with his £25,000 Mercury Prize money: “I want to put that money towards a studio to be more creative,” he says. “I’ve always wanted to have a studio. And if I had one, lockdown would have been easier for me because I could have just been in there every day making music.”

The silver lining:  the crisis has  given him time to ruminate over the next album, which he again hopes to record with Danger Mouse and Inflo. Apart from that, he’s keeping its direction open. “I don’t want to have too many preconceived ideas in case I stifle something from growing. I’m just going to go and meet them with a few ideas and be open-minded with it.”

It’s the million-dollar question as to when gigs can start taking place again, but Kiwanuka has taken a punt by postponing 2020’s Trinity Summer Series concert in Dublin to next June instead. Still, he understands it’s a hope rather than a certainty.

“If I’m brutally honest, in the UK at the moment you can’t be in more than groups of six so being in a venue with everyone so close to each other, it’s going to take a big shift over Christmas and just after for it to happen. But I’m going to stay optimistic. I believe it will happen and we’ll find a way to get through it. We’ve just got a lot of work to do for it, whatever that work is.”

The positivity already seems to be working. A few days after we speak, news of the first successful vaccines offer a light at the end of the tunnel. And if Michael Kiwanuka’s journey has taught us anything, it’s that patience mixed with perseverance pays off. Even if it takes a little longer than we’d like.

Kiwanuka is out now on Polydor Records