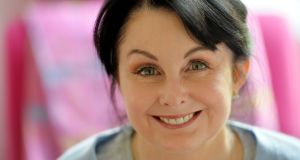 The festival – supported by Peugeot – is a series of online talks taking place from Monday July 13th to Thursday 16th.

It turns out that Keyes’s mother – whom she calls Mammy Keyes – is not a fan of all the “riding” in her daughter’s books. (This equestrian reference does not involve horses.) But Mammy Keyes watched all of the television adaption of Normal People recently, which confused her daughter. “It must have been pandemic lunacy,” she told Ingle.

Forget the video-call background wall of books. Keyes’s background to her call was a striking abstract painting in blue, which she painted herself. “I give them to people, even though they don’t want them,” she explained. “I gave one to poor Nigella.” That would be Nigella Lawson, because Marian Keyes knows everyone.

The duo talked about the “entrenched sexism” in society. “There are so many caveats on how to be a woman,” Keyes said. “Be nice. Be good. Be sweet. Be biddable. Be six stone. A great job is done of keeping us humble.

“The end result is that women doubt themselves. We live in a world where men have most of the power and most of the money.”

Ingle asked Keyes how long she had been sober. “Twenty-six years,” she said. “I thought when I stopped drinking that my life was over, but my life was just beginning. If I could get sober, anyone can.”

How was she finding menopause? “I felt like I was having a nervous breakdown,” she said bluntly.

Keyes is currently writing a sequel to one of her most popular book, Rachel’s Holiday. She told viewers that a section of it had temporarily vanished into a black hole, via some computer glitch, so it’s reassuring to know even famous writers also grapple with technology from time to time.

Tickets for the rest of the festival are on sale at a reduced price of €20, which gives access to all remaining events. Simply click here and apply the discount code “summer20” before purchase to avail of the €20 price. For digital subscribers the discount will be automatically applied – just make sure you are signed in to The Irish Times before you click here.

Ticket buyers receive a link by email on the day of the festival, allowing them to attend the events on all four evenings via their phone, tablet, laptop or desktop computer.