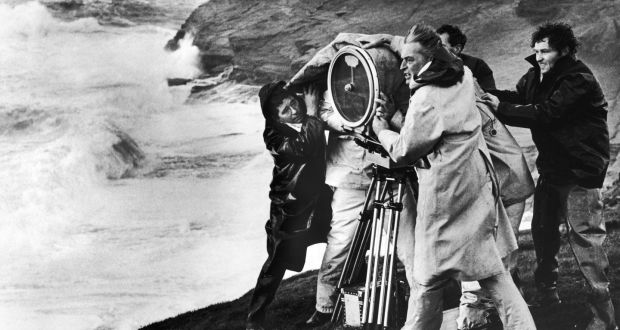 David Lean films a tempestuous sea on the west coast of Ireland for a climactic scene in the MGM film Ryan’s Daughter. Photograph: Archive Photos/Getty

What a horrible shower arrived in Dingle in 1969 and I don’t mean the rain. The author of this book, Paul Rowan, was just a child when a large cast and crew were working on what became the 1970 film Ryan’s Daughter but he probably still had more maturity than the infantile, alcoholic narcissists who arrived to pollute the southwest edge of Ireland for more than a year.

This book recounts their exploits and egos in considerable detail and, while much of it is entertaining, pacy and the product of considerable research and commendable effort, including interviews with more than 60 people who were involved, it is also profoundly dispiriting. Ryan’s Daughter is a terrible film but those responsible for it were even more objectionable, and it is difficult to find likable characters amid the sea of petulant entitlement, hubris and gross extravagance.

The visitors were, however, for the most part welcome; they had stacks of cash and Dingle was sure to benefit greatly in material terms.

The promoters of this book have chosen the description “rollercoaster” to describe this account of the making of the film, but it was more of a ship that floundered on the rocks during what became an 18-month shoot. The film did much damage to the critical reputation of the director David Lean, then regarded as the world’s “most painstaking film director” and whose three previous films had won 19 Oscars.

With scriptwriter Richard Bolt, Lean signed a contract with MGM that was then the most lucrative in movie history. He was paid $1 million, a 35 per cent cut of net profits and a living allowance of $1,000 a week. Bolt was paid $400,000, 10 per cent of net profits and the same living allowance. Those figures should not surprise too much; Lean’s Doctor Zhivago had cost $11 million to make but generated $150 million.

Robert Mitchum set up headquarters in Milltown House in Dingle, which he referred to as 'house arrest’ and nearly went out of his mind due to boredom, marijuana and oceans of alcoholic spirits

The film was shot in 70mm rather than 35mm, requiring a very large technical crew and a bloated, sycophantic Lean tribe; the so-called Dedicated Maniacs “that went from film to film”, bullying, womanising, carousing and harassing to get their precious leader what he wanted, especially Lean’s fixer, the obnoxious, foul-mouthed Eddie Fowlie. As Lean saw it, the extensive crew was “the last of the travelling circuses” with cars, vans, cameras and cranes, and one of the strengths of this book is that it details the dying days of the studio system of film-making.

But what Lean wanted most in Dingle he simply could not have: control of the weather and, along with his giant ego, it was this that defeated him.

As well as Lean, the film’s producer, Anthony Havelock-Allen, was in “epic mode” and filming began in February 1969. It involved the construction of a new village with buildings made from real stone and slate by a crew of 200. Given that unemployment benefit was then less than £5 a week, the capacity to earn 10 times that was understandably embraced by unemployed locals; some were also happy to rent their houses to high-paying film employees or watch their businesses thrive.

The original idea for the film was adapted from Flaubert’s Madame Bovary. During the first World War, Rosy Ryan (Sarah Miles) is a local woman who marries widower and schoolmaster Charles Shaughnessy (Robert Mitchum) and has an affair with a shell-shocked British army officer, Maj Doryan (Christopher Jones). This earns the opprobrium of her nationalist community, while there is a subplot of German arms to support Irish republicans needing to be rescued from the stormy sea.

Trevor Howard, in Dingle without his wife, was there to play Fr Hugh Collins but the circumstances were “a recipe for alcoholic mayhem”. After dawn make-up calls, Lean frequently kept cast members waiting all day, only to then inform them they were not needed. Off screen, Howard broke his shoulder after kidnapping a horse.

Mitchum set up his headquarters in Milltown House in Dingle, which he referred to as “house arrest” and nearly went out of his mind due to boredom, marijuana and oceans of alcoholic spirits (“the most joyless period of my life”). Following one drunken brawl, he had to endure a three-week lay-off due to a black eye.

Lean naively thought 'he could beat the elements’, which displayed not only arrogance but also a snobbery and complete misunderstanding of Ireland

Lean and Mitchum despised each other and did not speak; the atmosphere on set was constantly tense and there were turf wars over costumes, with Jocelyn Rickards, the costume designer, wondering of Lean “what’s the point of working your guts out to please a man who’s determined to be displeased”. Lean, it seems, deliberately ran a political set and fostered numerous jealousies and rivalries.

Sarah Miles, then married to Robert Bolt, existed on cigarettes and Complan energy drinks and was eccentric, exhibitionist and unsure of herself; while she was dismissive of the women’s liberation movement then in its infancy, she “fumed” that she was paid only a flat rate of $125,000 while Mitchum got $875,000.

As for Christopher Jones, although he remained aloof from the partying, he was beyond useless because he could not act or master an English accent and his role required both. Nor could he cope with the film’s main love scene, had to be coaxed for weeks (“I don’t know why I was refusing”) and it seems, was eventually secretly drugged.

The “Hard Lads”, the Irish actors playing the rebels, were in clover; some of them saw their wages rise from £18 a week on stage to £100 a week in Dingle, initially contracted for just 14 weeks, which was then extended to 53 weeks. But for the most part they were just waiting for the required storm scene to materialise and there was nothing to do, as they saw it, except drink, some days from 10am until midnight. Ironically, one of the lines uttered in the film by Fr Collins is “doing nothing’s a dangerous occupation”.

The recounting of all the yarns about drinking, fights, tantrums and childish feuds gets tiresome (Michum liked to blow up life-size plastic dolls and fly them from his caravan to annoy Lean and also peed in the sand and bared his backside to onlookers). But the impact of what the late Niall Tóibín, one of the “Hard Lads”, referred to as the “cloistral conditions” in Dingle is powerfully brought home.

It is a pity more is not made of the experiences of John Mills, who does not feature as much, it seems, because his Dingle experience was relatively happy; he also received an Oscar for his performance as the “village idiot” Michael, but this is glossed over in favour of dwelling on the acrimony. More, too, could have been done to give a stronger sense of how Dingle residents reacted to what was going on around them; warnings from the pulpit are mentioned but not elaborated on in any detail.

A few consecutive sunny days were necessary for some of the scenes, a tall order in west Kerry. As assistant director David Tringham saw it, Lean naively thought “he could beat the elements”, which displayed not only arrogance but also a snobbery and complete misunderstanding of Ireland. Eddie Fowlie had to travel to South Africa to find the beaches to save the film. Eventually, the storm scene (Lean “wanted to capture the celluloid storm to end all storms”) had to be filmed at the Bridges of Ross in Clare over eight weeks.

Much to Lean’s disgust, Roy Stevens, an associate producer on the film, ended up doing this as a second-unit director (“the whole thing was murder” was his summation). Lean could not cope with Stevens pulling this off and froze him out.

The film ran 135 days over schedule and $3,549,833 over budget, leaving an overall cost of $13 million. When it was released, it was deservedly savaged. One reviewer noted succinctly that “the coast has most of the best lines”. As the Los Angeles Times saw it, the love story was “too frail and too banal to sustain the crushing weight of 3 hours and 18 minutes of super Panavision” while the New Yorker dismissed it as an “awe-inspiring and tedious lump of soggy romanticism”.

The film still managed to eventually gross more than $30 million, but the criticism crushed Lean, who did not make another film for 14 years. The film set constructed in Dingle was also crushed, removing what could have been a permanent monument to a fascinating but ultimately indulgent and doomed enterprise.