Jacques Brel’s vision is very alive and well in Dublin 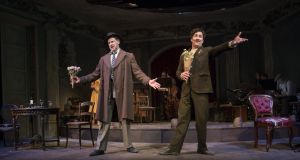 Risteárd Cooper and Rory Nolan in Jacques Brel is Alive and Well and Living in Paris at the Gate Theatre. Photograph: Pat Red

The Belgian-born master of the French chanson, who gave his name and his songs to the 1968 musical revue Jacques Brel is Alive and Well and Living in Paris, is neither alive, nor especially well, and is resting finally in the Marquesas Islands in French Polynesia.

On a recent afternoon in the Gate Theatre rehearsal room, performer Risteárd Cooper is worrying about other discrepancies. He has just been told that the lyrics to Amsterdam, a sordid and striking lament that is one of Brel’s most famous songs, will be printed in the programme for the Gate’s new production. “So I better get them right,” he frowns with studied dismay.

His music director Cathal Synnott grins back. If anything, it is Amsterdam’s familiarity that had been presenting them with challenges.

Since Brel debuted the song in 1964, singing its ever-rising and finally frenzied vocal line over a solitary guitar, the song has courted innumerable versions. Brel made his own embellishments, with orchestral arrangements of strings and flutes, and cover versions later abounded from the many artists he inspired: David Bowie, Scott Walker, John Denver and Marc Almond among them, with Irish devotees Jack L and Camille O’Sullivan each offering their own dramatic takes.

“It’s just such an incredible song,” Cooper says of Amsterdam, sitting with Synnott at a bulky old electronic keyboard, which no one was sure how to operate. (An unalterable “symphonic” setting brought every note the ghostly echo of detuned church organ, making it sound more appropriate for a late ’80s Tabernacle Choir). “This might not do the song justice,” Synnott apologises.

Nevertheless, in rehearsals they have managed to re-energise Amsterdam, letting Cooper begin with no accompaniment, before the music gradually materialises around him. “I wanted to put a stamp on it, to make a new statement about it, if possible,” ventures Cooper. “We are not reinventing the wheel, in any shape or form. But I don’t think it’s been done this way before.”

Cooper looks at his musical director. “Do you?”

“I don’t think it has,” Synnott replies, more cautiously.

Synnott is a late convert to Brel, as recently as six months ago. “I just thought it was kitsch,” he admits. “My experiences of him had been at college parties, people singing Ne Me Quitte Pas as though it was a Charles Aznavour impersonation. I didn’t want to be there.”

That number, a magnificently descending torch song that can be drowned in enthusiasm, is not in the show. “It was actually through learning the songs that I realised this is extraordinary music. It’s extraordinary personal music.”

Cooper has a longer history with Brel, having decamped for one summer 30 years ago to Nantucket with another Brel-inspired revue while he was still an acting student. Together, Cooper and Synnott’s conversation can resemble the dialogue between a believer and a sceptic, but both agree on the problem of Brel in performance. “I’ve seen interpretations of Brel where it is very much in-your-face and it overperformed,” Cooper says with a grimace. “We don’t need to be spoon-fed. I think the lyrics are so brilliant that it’s better to just suggest what he may be getting it, as opposed to telling the audience.”

Synnott found it instructive to watch recordings of Brel’s own incantatory performances, where technique is never as important as emotion – Brel was famed for ending his concerts slick with sweat. “He doesn’t deviate from the songs, he doesn’t do anything extraordinary to present their message, he just tells it.”

They recognised, though, that other things can conspire to get in the way of Brel’s telling. Their production relies on Eric Blau and Mort Shuman’s translations, not universally beloved, where Brel’s sardonic poetry is sometimes softened and sanitised. Les Flamandes, for instance, a mean-spirited song about Flemish womanhood that made Brel a pariah in Belgium, was reconceived by Blau and Shuman as a bouncy satire on 20th century history called Marathon. It has been excised from this staging. Cooper raises another cautionary example, Seasons in the Sun, a popular defanging of Brel’s Le Moribund which became a saccharine hit for Terry Jacks in 1974 and then Westlife in 1999.

“Either musically or in the arrangements, those versions seem to want to emasculate Jacques Brel,” says Synnott. “I think everybody agreed that Marathon just doesn’t tally with who Jacques Brel was.” Instead, Synnott and Cooper convey a desire to return Brel to his own revue, to restore the edges of his songcraft and recognise the political and profane in his music.

“The idea is that each song is effectively a playlet,” says Cooper, who performs with Karen McCartney, Stephanie McKeon and Rory Nolan. “They each have a very clear story, whether funny or reflective. There is a clear line in the narrative of each song.”

Brel, a trenchant and caustic social critic, might be most present in Les Bourgeois. An acrid joke, on the surface it is a repudiation of his family background, as the scion of a prosperous Belgian factory owner, but it also befits someone who – as a bitter opponent of the Vietnam War – smothered his own objections towards the US and consented to an off-Broadway production that made him famous worldwide. The payoff of that song – that we turn into the thing we most despise – also offers a revealing blueprint of Brel’s songcraft: everything is cyclical, it comes full circle.

“Exactly,” says Synnott, as he picks out a waltzing rhythm on the keyboard. “We were talking about this earlier on, that there is is usually a circular sense. I always think of three [beats to the bar] as a circle. Carousel is a perfect example of that.” That song, the production’s crescendo, creates an image of life that is always accelerating, finally moving so fast that it threatens to spin out of control completely. When Stephanie McKeon sings the song’s infectious melody, in gathering triplets, the band silently regard each other and put their foot on the pedal. “We go from zero to 90,” Synnott enthuses. “It’s a shared delight.”

“There is such relentlessness to the songs,” approves Cooper. “There’s barely a pause between verses, so once you start singing, you don’t stop. It’s like an outpouring. It’s an explosion.”

That’s why, they agree, the sly protest of Next or The Bulls still leaves a sting, or The Old Folks and You’re Not Alone will always know how to haunt. Brel’s surging songcraft, full of guts and pain, jokes and joy, barely leaves time to think. Even loneliness and death, two recurring themes, might be outrun by the music. His reflection on mortality, My Death, for instance, is more vigorous than submissive.

“It’s saying f**k you to death,” says Cooper. “I’m still alive enough to write about it.” That’s one way to ensure a certain kind of mortality – as long as his songs continue to inspire fresh interpretations, Jacques Brel will always be alive and well.

- -Jacques Brel is Alive and Well and Living in Paris is now on at the Gate Theatre, Dublin