It’s time the State treated our cultural institutions with respect

After the John McNulty debacle at Imma, we need to close some of the loopholes in the way board members are appointed 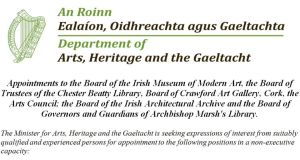 Things were looking up. In June last year the Department of Arts, Heritage and the Gaeltacht sent out a public notice “seeking expressions of interest from suitably qualified and experienced persons for appointment” to the boards of the Irish Museum of Modern Art, the Chester Beatty Library, the Crawford Art Gallery, the Arts Council, the Irish Architectural Archive and Marsh’s Library.

Two aspects of this process are important. The would-be board members had to be “suitably qualified and experienced” and the ad warned that “the Minister will not be restricted to considering only those who have responded to this invitation”. These conditions are where the trouble lies: what exactly makes someone “suitably qualified” and on what basis will the Minister decide to appoint someone who has not expressed an interest?

Until recent weeks these unanswered questions did not seem to pose insuperable problems. In all the furore about the cynical abuse of an appointment to the board of Imma it is easy to miss the fact that this new system of opening up the appointments process was working reasonably well. It was not perfect – and we now know it had fatal cracks just below the waterline – but it was a modest success.

Thirty-seven people responded to the department’s 2013 ad. Since then 15 vacancies on the boards of the six organisations in question have been filled. Ten of these were among the 37 who responded to the ad. So two-thirds of the appointments have come through the open public procedure and one-third have not. That’s not a bad record for a new procedure. It is quite legitimate for a Minister to appoint someone to a board who has not previously applied – boards need to have a balance of skills and of genders, and it may well be that a “suitably qualified” candidate can’t be found among those who expressed an interest in serving. So on the face of it, at least, board appointments in the cultural sector were being done on a significantly more open basis than in the past.

This reasonably positive story makes the debacle over the appointment of John McNulty to a board on which he could not possibly serve even worse. There’s a tendency to see this stroke as just business as usual. But it was worse: it reversed in a single gesture of contempt real and substantial progress. Things can improve – even governance in Ireland – and they were improving. It is staggering that the first significant act of a new Minister for the Arts was to shred all that progress and send us back to the very worst days of appointments to national cultural institutions being used merely for party-political patronage.

So where are we now with all of this? What we’ve discovered is that the two loopholes – the lack of a definition of “suitably qualified” and the issue of ministerial discretion – are open to flagrant abuse. Every arts-related board to which the Minister makes appointments has now been placed on notice that behind all the new openness is an abyss of accountability: the Minister will do what she likes, whenever she likes.

In her very sparse comments on the John McNulty debacle, Heather Humphreys has made one thing clear: that her definition of “suitably qualified” in relation to serving on the board of a national cultural institution includes anyone with a demonstrated interest in the GAA and the Irish language, anyone having some business experience, and anyone from outside Dublin. But these are not just her criteria: they were officially endorsed by the Fine Gael party and by Ministers who ought to know better, including Leo Varadkar and Alex White. At no point has this definition of “suitably qualified” been withdrawn or modified.

At the same time it has been made clear that ministerial discretion in making these appointments is absolute. Humphreys has refused to answer any questions – including those posed in the Oireachtas – about how and why she exercised her discretion. The legitimate use of ministerial discretion would require some kind of objective process, such as talking to the chairs of the boards to find out what skills they were lacking. But we’ve discovered that in fact the Minister’s understanding of her powers is that no process at all is necessary – and she is not accountable to anyone for the choices she makes. The loopholes turned into a trapdoor through which all notions of good governance for arts and cultural institutions have fallen.

The urgent need, therefore, is for the loopholes to be closed. We need, firstly, a clear, published definition of what makes someone “suitably qualified” to serve on the board of a national cultural institution. That definition should be specific to each institution: being on the board of the National Museum of Ireland is not the same as being on the board of the Abbey Theatre. If the Minister does not do this quickly, the chairs of each of the relevant bodies should draw up and publish definitions of what each requires in its board members. Secondly, ministerial discretion needs to be linked to proper procedures and accountability for its exercise. It’s not much to ask – or wouldn’t be in a State that treated its cultural institutions with something less than contempt. fotoole@irishtimes.com

The vanishing art of the book launch
9

Death in Her Hands: A rare disaster from Ottessa Moshfegh
10