Is Irish literature too local to have philosophical heft?

In broader European and American literature, it is easier to find genuine marriages of philosophy and fiction 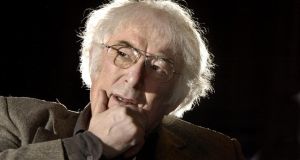 Through such writers as Beckett, Shaw and Wilde, Irish literature cannot be accused of ignoring philosophy, but very often it features as the butt of a joke rather than the central plot.

Picture a philosopher from Irish books or theatre and you may well think of Flann O’Brien’s De Selby in The Third Policeman, or O’Casey’s The Covey in The Plough and the Stars who ruminates on how we’re all just “the accidental gatherin’ together of mollycewels an’ atoms”.

In broader European and American literature, it is easier to find genuine marriages of philosophy and fiction, though not always happy ones. Dr Áine Mahon, who lectures in the School of Philosophy at UCD, has studied the intersection between these two disciplines for a forthcoming book. She provides today’s idea: Irish literature misses what’s universal about the human condition by focusing on the local.

Novels down the ages have been used as a vehicle for introducing philosophical ideas. Any examples you would highlight?

Áine Mahon: “When we think of the philosophical novel we tend to think firstly of the existentialists: Jean-Paul Sartre, Simone de Beauvoir, Albert Camus. All of these writers explored the human condition by writing novels as well as works of philosophy.

“Beyond the European context, Ralph Ellison in Invisible Man and Richard Wright in Native Son extended existentialist themes to the African-American experience. Of course, modern literature has also poked fun at the pretensions of philosophy. Flannery O’Connor has a very funny short story where a young woman well-versed in existentialist themes – in the philosophy of Martin Heidegger, in particular – has an unfortunate encounter with a Bible salesman who runs off with her prosthetic leg.

“But one point I try to highlight in my own research is that the relationship between philosophy and literature is much more nuanced than literature simply parroting or parodying philosophical ideas. Fiction can also be a rich resource for philosophy. The philosopher Cora Diamond, for example, has drawn on the writer John Updike to argue that there are certain aspects of our lived experience so difficult to face up to, so resistant to our everyday frameworks of understanding, that their careful contemplation can almost drive us mad.”

Are fewer philosophers writing novels these days, and why is that?

“Yes, definitely. While some philosophers have carved out successful careers both as novelists and academics (William H Gass being perhaps the most notable example), for the most part, creative writing and academic philosophy are uncomfortable bedfellows.

“It’s important to recognise that ‘philosophy’ doesn’t just identify a set of canonical authors or texts but is defined if at all by its method: by its respect for clarity and comprehensiveness, for logical rigour and argumentative precision. In this professional context, an aspiring philosopher would be forgiven for keeping her novel-writing to herself.”

“That’s a tricky question and depends on how you’re defining liberalism: Judith Shklar argues that the basis of any liberal democracy is its cultivation of sympathy and compassion. And such cultivation, for many moral philosophers, is where the modern novel comes in.

“The American philosopher Richard Rorty would say that George Orwell’s Nineteen Eighty-Four is the ultimate liberal novel as in its portrayal of the sadistically cruel yet plausible O’Brien, it allows us to imaginatively identify with victims of injustice. I think that Rorty makes a powerful point in suggesting that Orwell has done more for our appreciation of liberalism than any number of philosophical treatises on the subject.”

But Rorty is not a fan of contemporary fiction, arguing that it can neither inspire nor improve. What’s he getting at?

“For Rorty, contemporary fiction is too knowing, too cynically complex to act in any way as moral educator. A truly liberal literature inspires its readers with a moral message that is straightforward and clear; Rorty’s primary examples are the novels of John Steinbeck and Upton Sinclair.

“Of course, this division of novels into those that are aesthetically complex and those that are morally useful is a bit crude. Against Rorty, I have argued that Jonathan Franzen’s Freedom, for example, is at once formally ambitious and socially responsible.”

Is there a great American philosophical novel?

“American novels have always engaged with philosophical ideas, from Melville’s Moby Dick to Wallace’s Infinite Jest, and in general one would be tempted to privilege such works of intellectual ambition and metaphysical scope. But philosophical engagement can be modest as well as grand.

“In The Summer Without Men, Siri Hustvedt [who will speakat the Dublin Writer&#8217;s Festival tomorrow] illuminates in very interesting ways the work of contemporary American philosopher Stanley Cavell. Cavell is known for his writings on the moral self and the marital union, and Hustvedt’s novella is a beautiful testament to Cavell’s philosophical poignancy.”

Is American literature more philosophical in nature than Irish literature?

“There’s an ambition and expansiveness to American writing that is more difficult to trace in the Irish case. If we think of philosophy as an attempt to understand the universal human condition, we might say that Irish literature misses the universal in its insistence on the local. I’m thinking of the fractured subjectivities of Donal Ryan, the rural intensity of Colin Barrett, the careful restraint of Mary Costello. Seamus Heaney suggested that if the American national myth is the frontier, the Irish national myth is the bog. Our literary consciousness is characteristically inward-looking, in other words, preoccupied with past experience and injustice.”

Dr Áine Mahon’s first book, The Ironist and the Romantic: Reading Richard Rorty and Stanley Cavell, is published by Bloomsbury. It is being launched on May 30 as part of the UCD conference Philosophy, Literature, America. american-voice.org

Question: What’s the point in voting?

Plato replies: “One of the penalties of refusing to participate in politics is that you end up being governed by your inferiors.”