Culture shock: The publication is a significant resource for professionals and policymakers involved in the future development of museums 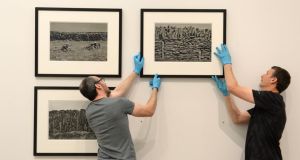 Art handlers prepare Aran 2005, a selection of black and white photographs which were part of an exhibition by artist Sean Scully at the National Gallery of Ireland in 2015. Photograph: Dara Mac Dónaill

The Irish Museums Survey 2016, which was published in December, aims to provide an overview of the state of museums in Ireland north and south of the border. That amounts to about 230 museums, ranging from major national institutions to much smaller regional museums, from, for example, the National Gallery of Ireland to the Irish Fly Fishing and Game Shooting Museum in Attana House, Portlaoise. It’s more than 10 years since the last detailed, systematic survey, although the Northern Irish Museums Council conducts five-yearly surveys.

A series of questions was dispatched to each museum by a team at the Irish Museums Association, headed by the survey’s author, Dr Emily Mark-Fitzgerald of UCD. Perhaps surprisingly, only 118 of the 230 “responded to and participated in the survey”, limiting the sample. But then, a significant number of museums are in essence small, voluntary enterprises. The survey was funded by a New Horizons grant from the Irish Research Council. The Irish Museums Association (IMA), the Irish Museums Trust and UCD’s School of Art History and Cultural Policy all collaborated in its production; it should serve as an invaluable research resource, but rather than being conclusive, it underlines the need for more data.

The survey results are quietly encouraging given the country has endured a dire period of economic recession since the previous survey in 2005. From that date, visitor numbers have remained more or less stable, at more than six million a year, with just over 60 per cent of those visitors being Irish. However, reliable estimates of visitor numbers are the exception rather than the rule, with a quarter of museums unable to provide any figures. Not surprisingly, the survey strongly recommends improving the means of collecting such information, especially given the development of increasingly affordable technological means of doing so.

Museum budgets were of course hit by the recession, with more than 46 per cent reporting financial cuts. The majority of museums are small: more than three-quarters of them are staffed by fewer than 10 paid employees, and about one sixth are entirely dependent on voluntary effort. Volunteers are vital to the functioning of 40 per cent of museums overall. Voluntary programmes are an essential, highly valued part of numerous high-profile institutions internationally and well as nationally.

From 1980 onwards, Irish museums saw a rapid rate of expansion. IMA chair Brian Crowley points out that a remarkable 68 per cent of museums surveyed were established since then. In time, this expansionary dynamic created the distinct impression that funding bodies favoured eye-catching capital projects over the realities of maintaining and developing institutions. With the recession, those practical realities hit with a vengeance. Staffing and programming costs were painfully vulnerable. In the midst of a hesitant recovery, that continues to be the case.

The challenges the sector now faces involve consolidation and development, as reflected in the Heritage Council’s Museum Standards Programme. It encourages professionalisation and, with the IMA, is substantially responsible for staff training workshops covering many aspects of the functioning of museums. Even given significant advances, education, outreach and access are all identified as areas needing further attention.

Recent controversies, including that surrounding the temporary relocation of the Seanad to part of the National Museum, are salutary reminders of the persistence of the contingent, marginal status of museums in the political consciousness. Too often, museums are still regarded as optional extras rather than central components of society. The Heritage Council hasn’t had a museums and archives officer since 2009.

Since the last survey, an online presence has become essential and almost all museums have one. At one extreme, that might represent the availability of the most basic information. At the other, it entails digital access to entire collections – surprisingly high at over 17 per cent – and, to diminishing degrees, their ancillary information and material, together with engagement with social media.

The word museum may suggest fixity but that is more apparent than real. They are a relatively recent phenomenon and will continue to change over time. Their popularity in an online age is almost paradoxical, even given the rise of the institutional model of the cafe and gift shop with a museum attached. The critic James Panero has questioned this increasing emphasis on “visitor experience”, which risks casting the museum as “an institutional theatre”. New statement museums, or expansion projects in existing institutions, tend to prioritise vast architectural spaces devoted to anything but the museum collections, he points out. The National Gallery of Ireland’s Clare Street extension is a case in point, although the ongoing major refurbishment of the Milltown and Dargan Wings does not, on the face of it, seem to fall into that category.

Elizabeth Merritt of the Centre for the Future of Museums in the US – where there are an estimated 17,000 in all – sees openly accessible digital infrastructure as vital, but equally an emphasis on encouraging “slow engagement” with collections – the opposite of the increasingly prevalent digital quick fix, where a smartphone snapshot or even a selfie with an artefact in the frame is about as much time as visitors are willing to give to any particular display. Against this background, the publication of the Irish Museum Survey, freely available online at irishmuseums.org, is a significant resource for professionals and policymakers involved in the future development of museums in Ireland.

The Volunteer by Jack Fairweather: the hero who first exposed the Holocaust
10