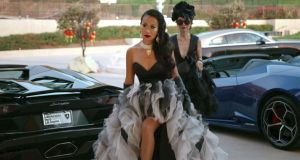 As we know, Netflix’s viral successes are created by randomly putting two words together and then reverse-engineering a show from the resulting resonances. We’ve had Tiger King and Selling Sunset, and now we have Bling Empire. I doubt the people at Netflix even understand themselves why these shows are so popular. In recent times it’s become clear that “the algorithm”, much acclaimed in the olden days, is just their nickname for the intern who randomly fecks programmes up on my Netflix home page.

Self-consciously inspired by Crazy Rich Asians, Bling Empire is a scripted reality-television programme about a group of very rich Asian and Asian American people living in Los Angeles. The people of Bling Empire host parties and do modelling shoots, and have icy rivalries and drive around their town hanging out of their cars with their shirts off while yelling with joy. Big deal. I pioneered that move back on the mean streets of Newbridge. Granted, the car wasn’t a limousine, it was an Opal Corsa, and the shirtlessness displayed not so much a sixpack as a diagnostic diagram for clinicians, and the yelling wasn’t with joy but with post-Catholicism.

When people are as rich as Kane is, they say things like, ‘I’d like to hire the Picasso of plastic surgeons!’ without thinking it through. And now Kane’s face is geometrically avant-garde and should be in a gallery next to Guernica

Our point of view character is Kevin, a model who grew up without wealth. But what he lacks in money he makes up for in charm, hunkiness and a willingness to take his shirt off at the slightest provocation. I know. Just like meself.

Kevin’s best friend is Kane. We meet Kane as he is praying at a little Buddhist shrine he has set up in a room filled with incredibly expensive runners, which is just as the Buddha would have wanted it. Kane’s family are oil magnates, and they recently bought him a building in order to entice him into the family business. Kane isn’t interested. He’s having too much fun with Kevin and “the twins”.

That’s what I call Kane’s outrageously prominent cheek implants. They are a striking choice, and they consistently draw the eye. Why? I’m sure when people are as rich as Kane is, they say things like, “I’d like to hire the Picasso of plastic surgeons!” without thinking that through. And now Kane’s face is geometrically avant-garde and should be in a gallery next to Weeping Woman and Guernica.

Then there’s Christine, who is married to Dr Chiu, whom she calls “Dr Chiu” and who is a descendant of the Song dynasty. They have a toddler son, Baby G, who Christine likes to photograph in blinged-up fashion garb, driving a motorised toy car and clutching $100 bills. Christine is an inveterate namedropper. Dr Chiu is a doctor (of art? Of astrophysics? It is unclear). Baby G’s personality can largely be summed up by saying: he is a baby.

In episode two Christine, Dr Chiu and Baby G go to the cryo-lab to visit Margo and London, their frozen embryos. During a photo shoot Christine asks Kevin for modelling advice.

“Think of something sexual,” says Kevin.

Already, I want the Red Power Ranger to feck off and transform into a robot arm or something, and for Kelly to get with Kevin, who is funny and frequently shirtless and reminds myself of a younger me. That’s how they get you, you see

Then there’s Kelly. Kelly’s ex-husband was engaged in a huge cyberscam that resulted in them having $168 million seized by the Chinese government, and now she is in a steamy relationship with her lover the Red Power Ranger. This is relatable content, says you.

Kelly canoodles unselfconsciously for the camera with the Red Power Ranger (he’s an actor who was in Power Rangers), but he is a grumpy sort. When Kelly’s friend Anna takes them out to dinner in her favourite restaurant in Paris, the Red Power Ranger gets angry about not getting enough attention and shouts down the phone at her.

Already, I want the Red Power Ranger to feck off and transform into a robot arm or something, and for Kelly to get with Kevin, who is funny and frequently shirtless and reminds myself of a younger me. That’s how they get you, you see.

Anna, the scion of a weapons-dealing family, is probably the richest person in Bling Empire. When we meet her she is smashing her own wall with a sledgehammer while wearing a ballgown because, I guess, she can do whatever the hell she wants. Anna is unhinged from all social expectations and moral obligations.

Anna should park her Francophile notions for a bit to remember something big that happened in France a few hundred years ago, back when Marie Antoinette liked to dress up as a shepherdess. Anna is untroubled by historic echoes. “You have to live for you,” she says, which coupled with the image of her in a ballgown smashing a wall could become a poster for sociopathic nihilists everywhere.

The various dramas are so arch they’re positively Romanesque. Anna and Christine have a rivalry that seems largely to take the form of wearing bigger jewellery than the other and namedropping royals they have met. At one point Christine tries to clear the air by inviting Anna to her house. “I thought we’d have a little girls’ night in,” she says, even though they’re not girls and might well be in their 80s, so good are the elixirs and chemicals in which they have been soaked.

There are other characters/humans. There’s Jaime Xie, who says things like, “My horses fly Emirates.” And Kim Lee, who is a big DJ and whose mother wants her to sex up a photo shoot. “If you’ve got it flaunt it!” says her mother, which certainly puts the advice I got from my Irish parents in perspective. (“Keep your head down and sign nothing.”)

Like much reality TV nowadays, Bling Empire is a sophisticated postmodern grift. It’s impossible to parse the layers of truth and irony and self-awareness and fact and fiction

On some level they know that at this point in history their wealth and privilege are built on shifting sands. Christine stops at a Ducati dealership in the first episode because, having seen postapocalyptic films in which people are stuck in interstate traffic, she wants a motorbike to take her to her private jet. Seriously. She arrives there with two huge and identical bodyguards. This is almost sweet. Rich people don’t realise that the first thing they’ll need to do when the end times come is protect themselves from their own staff.

In general, however, the programme makers and the rich folk they document clearly know exactly what they’re doing, and, like much reality TV nowadays, it’s a sophisticated postmodern grift. It’s impossible to parse the layers of truth and irony and self-awareness and fact and fiction.

There’s an old Simpsons joke about Generation X’s propensity for irony. “Are you being sarcastic, dude?” The reply: “I don’t even know any more.” And those were actually relatively simple times. Younger viewers of contemporary television have grown up in a bizarre self-reflexive hall of mirrors. Is this good or bad television? Is it real or fake? Am I enjoying it authentically or ironically? Sorry, readers, I don’t even know any more.