How a London Imam became a sean nós singer 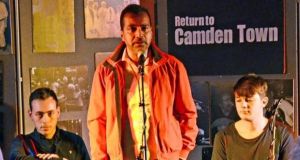 Muhammad Al-Hussaini: “When I sing sean nós I feel I am reciting sacred verses in Irish. It really feels like that. In our hearts, we are all Irish.”

Imam Muhammad Al-Hussaini stands in a white-painted room in the London Irish Centre singing the slow sean nós air, Caoineadh na dTrí­ Muire, the keening of the three Marys at the foot of the cross.

His hands are held rigidly to his sides. “I suffer dreadful stage-fright, really awful,” says Al-Hussaini, a second-generation British Muslim who grew up in London the 1970s.

His voice is beautiful – a fact first noticed in Irish circles when he sang the Boys of Barr Na Sráide late one night on the edge of the first Gaelic Voices Celtic music festival nearly two years ago.

“That was my first time singing in public; it was a very shy experience. I am not used to singing in a public context. People came up and said that I had got a good voice and needed to take it forward,” he says.

Al-Hussaini had started going to the London-Irish Centre a few months before that to learn the fiddle: “I had always listened to and loved Irish music, but I didn’t feel that I could participate in it.”

By day, he is a fellow in Islamic Studies at the Westminster Institute in London, from where he has frequently criticised the actions of Islamic extremists, and at some personal cost. For him, the Camden centre “is my safe space”.

“The welcome was extraordinary. The welcome that I have had from the diaspora community here has been unparalleled.”

Growing up in London with “the privilege of a plural environment”, he says he had close English, Irish, Jewish and other boyhood friends, who are like brothers to me.”

However, Irish culture seeped deeply into him: “I felt a sense of kinship. I always had a deep love of Irish culture and history, the sense of family.” In university, he learned more about Ireland.

Al-Hussaini’s fiddle teacher was Karen Ryan: “She is a maestro,” he says. In time, he was introduced to Ryan’s uncle, Pat Connolly, a Connemara sean-nós singer living in London for years.

“He runs singing sessions in this room. I sat at the feet of the master and picked up technique and style,” he says.

“I was completely captivated. Iarla Ó Lionáird’s magical voice caused me to reflect on how closely the Arabic-Islamic musical tradition and recitation of sacred scriptures, in which I have been trained as an imam, so remarkably resembles the heavily ornamented style of traditional Irish language song.”

He began with a mixture of English and Irish and simple Irish songs, listening to “great singers like Joe Heaney”, and the late Waterford singer, Nioclás Tóibín, trying to engage with the style.

With help from another singing teacher, Kathleen O’Sullivan, he prepared for the early entry rounds for the Fleadh, winning the All-Britain before he headed to the main competition.

“I didn’t win it, but I did get placed,” he says. Unsurprisingly, the judges were taken by the presence of a Muslim imam on stage, spending ages telling him how he had been just short of winning a medal.

Not everyone in his community has been so impressed, however. His family is content, regarding his interest in the traditional music of another culture as “further evidence of my general eccentricity”.

However, Al-Hussaini is disliked by many Muslim conservatives, who are unhappy about his work at the Westminster Institute that challenges Islamist and other extreme interpretations of the faith.

“I have received a lot of criticism for doing music, not just for sean nós. There is a conservative reading of Islam that discourages music and in some cases explicitly bans it,” he says.

However, some do, believing songs that speak of unrequited, or lost, love demean the status of an imam: “I have had my ears tugged on a few occasions,” he says, downplaying the difficulties.

If he has to sing, some argue, then he should sing Arabic devotional songs, known as nasheeds. Many refuse to accept even that. Muslim opinion in Britain is particularly conservative, he says.

His own spiritual guide, however, has been supportive, telling him to “be of good courage”, believing that anything that presents Muslims positively today is to be encouraged, not hindered.

Conservative Muslim opinion is one thing. Extremists are another. From them, he has received faeces-smeared letters, plus torrents of social media abuse, especially after the Charlie Hebdo massacre.

Al-Hussaini has been forthright, condemning in television and newspaper interviews those who claimed the Paris attacks were a legitimate retaliation for desecrating the image of the Prophet.

Some details about his life – the district in London where he was brought up, his family background, where he lives and, oddly, even his age – are off-limits on security grounds.

“Extremism seeks to abolish the arts. Isis ban coloured pencils because it is a form of ideological mind-control which the arts frees one from. Arts promote a sense of humanity and expression that is not necessarily constrained by a literalist reading of scripture,” he says.

“So it is in the interests of those who have that particular agenda to sit upon expressions of art, even if they are traditionalist expressions of culture.” In any event, song and poetry is wedded into Arabic culture, “long epic poems, our equivalent of the Odyssey and the Aeneid, that were sung around the Bedouin camp fire.

“People still have the whole of these poems in their heads. There are poetry recitation competitions all over the Gulf. You can become a millionaire from winning one of these, they are so highly valued.”

However, he prefers to talk about sean nós, not extremism: “The regional ways of singing are important to me, I am a real obsessive compulsive, I am really keen to ensure that the way that I sing honours the tradition.

“In the west of Ireland there is a strongly nasal way of singing. The voice is up there, high in the head. It is really important to me to learn that, I haven’t yet but I am still working on it.”

For him, sean nós is freer, less prescriptive than anything in the Islamic world: “When I sing sean nós I feel I am reciting sacred verses in Irish. It really feels like that. In our hearts, we are all Irish.”