Pte Henry Harrison killed during Battle of Loos in France on September 25th, 1915 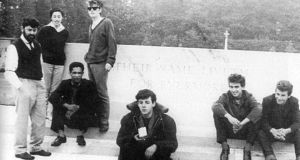 Researchers claim to have discovered the first World War grave of the grandfather of former Beatle George Harrison in northern France.

Pte Henry Harrison, who had seven children, died on September 25th, 1915, the first day of the Battle of Loos.

The centenary of the battle occurs later this month.

Harrison had Irish roots on his mother’s side. His maternal grandfather John French was born in Co Wexford.

Though the life stories of The Beatles have been very well documented, it is the first time that it has been confirmed where and when Harrison’s grandfather was killed in the war.

Mr Fetherston said the discovery was proof that even after 100 years “ there is always something new to learn”.

The CWGC, which is responsible for tending to all the British and Commonwealth War graves, records some 10,200 British war dead from that day, including 8,500 who fell in Loos itself.

The most famous casualty in St Mary’s ADS is Lt John Kipling, who was with the Irish Guards. He was the son of the author Rudyard Kipling.

His grave was only identified in 1992, and this inspired both the stage play My Boy Jack and the film of the same name, mostly shot in Ireland, which was released in 2008.

Pte Harrison enlisted in the 1st Battalion of the Loyal North Lancashire Regiment in November 1914. The family lived in Wavertree - an area of Liverpool, in Merseyside.

It was not until November of that year, two months after he died, that his wife Jane Harrison received a telegram informing her.

She was left heartbroken - and their seven children fatherless.

The Wavertree Times recorded: “Official notification has been received by his wife at 24 Abyssinia Street, Wavertree, Liverpool of the death of Private Harry Harrison, 1st Batt. Loyal North Lancashire Regiment who was killed in action in France on September 25.

“Before joining the army he was in the employ of a Liverpool firm of builders. He joined the service in November last and was drafted to the front in the spring. He leaves a widow and seven children.”

The CWGC said it had been approached by a local man who came into their office in Arras with documentation linking Henry Harrison with his famous grandson.

“After looking at the documents and other records available, there appears clear and compelling evidence that Henry is George’s grandfather. We wonder if the family ever knew of their loss or visited the grave?” Mr Fetherston said.

The Beatles were once photographed at a war graves cemetery. They stopped off at the Arnhem Oostberbeek War Cemetery in August 1960 as the band journeyed from Liverpool to Hamburg, though John Lennon is not in the picture as he refused to get out of the van.