The sinking of the ‘Lusitania’

The torpedoing of the Cunard liner, 100 years ago, was not the first mass killing of civilians in the first World War. But it generated outrage in a way that previous atrocities had not

The torpedoing of the Cunard liner, 100 years ago, was not the first mass killing of civilians in the first World War, but it generated outrage in a way that previous atrocities had not. Video: Ronan McGreevy 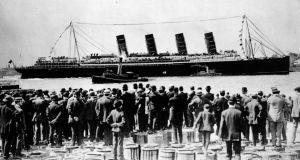 Ill-fated: RMS Lusitania on its maiden voyage from New York, in 1907. Photograph: Bain/Library of Congress 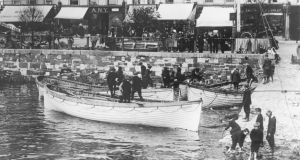 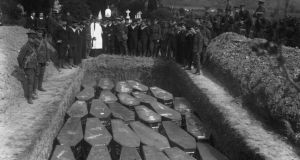 Ill-fated: one of the mass graves in which Lusitania victims were buried, in Cobh. Photograph: Topical/Getty

In the old cemetery overlooking the picturesque seaside town of Cobh are three mounds of uneven earth that resemble unmade beds. They are mass graves, designated only as A, B and C, for the people who drowned when RMS Lusitania was torpedoed by a German submarine just under 20km off the Old Head of Kinsale on May 7th, 1915.

Afterwards the grim reality of the first World War came washing up on the shores of what was then Queenstown. The people of Cobh responded with a sense of purpose that remains a source of pride for the town. For weeks they dealt with the awful flotsam of the Lusitania: the hundreds of bodies washed ashore or picked from the seas around Co Cork.

After the explosion little boats put to sea to rescue the survivors. Without the efforts of locals who risked their lives the death toll of 1,198, out of the 1,959 people aboard – these official figures exclude three German stowaways suspected of spying – would have been worse. The dead were put in open coffins on the quayside for identification; many whose next of kin had also drowned were never identified.

The Cunard offices in Cobh were besieged “by a pitiful little group of men and women, many bandaged, some on crutches”, according to a reporter from the New York Tribune. Grieving mothers wandered the town, looking for their children. One message read: “Lusitania – missing baby; missing a baby girl, fifteen months old. Very fair curly hair and rosy complexion.”

The US consul in Cobh, Wesley Frost, recalled seeing “five or six drowned women with drowned babies in their arms; and the corpse of one mother who had a dead infant clasped to each of the cold breasts which had so recently been their warm nestling place”.

The U-boat that fired at the Lusitania

U-20, the U-boat that fired at the Lusitania, was low on fuel and had only three torpedoes in its hold. In the days before it sank the liner U-20 had sunk the 132-ton schooner Earl of Lathom, after allowing its crew to abandon ship, the 6,000-ton Liverpool steamer Candidate and its sister Centurion.

The Lusitania was once the fastest ship on the Atlantic crossing. It could make 24 knots – 45km/h – and outpace a submarine, but in wartime it travelled more slowly, to conserve fuel. The Lusitania’s sinking marked a departure in modern warfare. There had been mass attacks on civilians before. The newspapers had been full of stories of German atrocities against Belgium, and Germany had also bombed British coastal towns, but the Lusitania’s sinking generated outrage worldwide. Germans became the “barbarous Hun”, in the words of a cartoon at the time.

The sinking of the Lusitania was not the catalyst for American entry into the first World War. That did not happen for another two years. It was, however, the beginning of the end of US neutrality in the conflict.

Germany could hardly have been more explicit than when its US embassy published warnings, in the New York Times and dozens of other newspapers, against sailing in UK ships – and placed them beside Cunard advertisements for its transatlantic services. Still, the received wisdom in government corridors and among the travelling public was that Germany would never sink an ocean liner and risk bringing the US into the war.

Germany introduced unrestricted submarine warfare – which is to say it would attack UK or allied merchant shipping without warning – in February 1915, in retaliation for a British naval blockade that had blocked the English Channel and the North Sea to German shipping. This was strangling German commerce.

The Lusitania’s dead included 31 infants trapped beneath the hold when the torpedo struck, those in steerage making the wartime passage, and one of the United States’ richest men, Alfred Vanderbilt. The most famous fatality was the Cork-born art collector Sir Hugh Lane.

The British government was quick to exploit the tragedy for the war effort, not least in Ireland, where recruitment was sluggish. “Irishmen, Avenge the Lusitania,” cried one poster.

The sinking turned American public opinion against Germany. German-Americans – the United States’ biggest ethnic group by country of ancestry then and now – were a substantial obstacle to intervention. President Woodrow Wilson tried to steer a neutral course, but in April 1917, after Germany resumed unrestricted submarine warfare – and tried to entice Mexico into declaring war on its North American neighbour – the US declared war on Germany.

In Britain the sinking provoked revulsion. German property was destroyed, and there was a clamour to deport or intern German citizens. Some people believe that the British government was negligent or complicit in mass murder in the sinking of the Lusitania, which, they say, it allowed in order to draw the US into the war. And many fingers of conspiracy point at one man: Winston Churchill, first lord of the admiralty, who wrote of the propaganda value of the sinking: “The poor babies who perished in the ocean struck a blow at German power more deadly than could have been achieved by the sacrifice of a hundred thousand fighting men.”