Teenager was shot dead when 1916 volunteers hid in her house 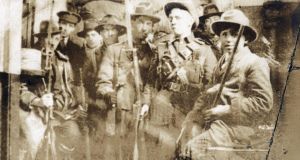 A man whose 16-year-old daughter was accidentally shot dead when volunteers fled the GPO in 1916 and took shelter at his house was awarded £100 two decades later for a bullet that hit him during the incident, files released from the Military Service Pensions Collection show.

“When the volunteers took refuge in my home one of the guns accidentally went off through my right shoulder and right lung killing my daughter Brigid who was immediately behind me,” Thomas McKane wrote in a letter to the Military Pensions board in 1937, describing events at their home off Henry Street on April 28th, 1916.

The men were “retreating from the post office” and “jumped across the yard wall” , he wrote in statement given to the board as part of his application for a special gratuity.

The door was closed and just as he “was about to open it shots were fired” and his daughter was shot in the head, shoulder and chest, he wrote. The shots “may have been accidental”, he said.

The files show that some 50 volunteers who were escaping the shelled GPO took brief refuge at their home on Henry Place off Henry Street.

“Thomas Clarke and Seán MacDermott, who were in the house at the time, promised to make full restitution when all was over,” McKane writes of the revolutionary leaders.

He was applying for “seven or eight wounds” under the retrospective Army Pensions Act 1937 which covers ex-gratia payments to persons who received a wound or injury by accidentally being shot between 1916 and 1923.

McKane noted that he had been “partly disabled” since the accident and if there were any doubts to ask the minister for agriculture Dr Seámus Ryan who “rendered first aid” for him.

The files show some confusion as to whether a gun of one of the volunteers went off accidentally or whether they were trying to open the lock on the door.

Responding to a request for information from the board in a letter written on Department of Agriculture paper, Ryan wrote: “I have a very distinct recollection of the incident.”

Some of the volunteers knocked on the door during Easter week and when it was not answered “discharged a shot through the lock which killed McKane’s daughter”, he wrote.

“I arrived some time afterwards in the house and found that she was dead,” he wrote.

His recollection about McKane’s injuries were “not so distinct”.

“I believe he suffered some slight wound but it was not serious,” wrote Ryan.

The files show the thoroughness of the applications process in finding out whether McKane was wounded.

He was often asked if he had been volunteer himself and if he was friendly to the cause.

The Easter Week Men’s Association was asked by the board, in a letter, if the account of the gun being accidentally discharged injuring McKane and killing his daughter was correct.

It also asks the association if it was a house where volunteers “could expect a hospitable reception”. The association answered yes to both.

The files show that McKane had long suffered from his injuries.

A report dated May 1938, from a doctor at the military hospital who examined McKane, found that he was “permanently incapacitated due to gunshot wounds to the head and shoulder”.