The St Patrick’s Cathedral memorial tree evokes the trenches of the first World War. This interactive exhibit was created to mark the centenary of World War I, and explores local connections to war. Video: Darragh Bambrick 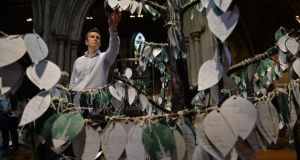 It has yet to be unveiled officially and there has been little or no publicity about it, but already the newly installed Tree of Remembrance inside St Patrick’s Cathedral in Dublin appears to be a hit.

Standing in the centre of the cathedral’s north transept, the 18ft distressed steel tree evokes brilliantly the dystopian landscape of No Man’s Land.

It is mounted on a kidney-shaped metal plinth and surrounded by faux barbed wire, threaded through twisted metal wire uprights.

It is as close as the current generation is likely to come to what a small patch of earth between opposing trenches at the Somme must have looked like a little over 100 years ago.

All the more remarkable, then, that it was designed not by an artist but by Andrew Smith, the cathedral’s education officer, a historian and teacher by trade, with a little help from Bisgood Bagnall of Tallaght, formerly Bushy Park Ironworks, who made it.

The scene at the Somme “is exactly the imagery we were going for”, says Smith.

The lacquered metal tree, whose bent trunk and 16 bare branches appear almost sinewy, was spotlit and bathed in sunlight in the normally gloomy north transept last Wednesday. It is the centrepiece of the cathedral’s Lives Remembered project, an exhibition inside the cathedral and online that explores the connections to the first World War of St Patrick’s and those who lived close to the cathedral a century ago.

They have no known graves but are remembered on the Menin Gate memorial. A display panel in the transept tells their story. Other panels tell of the transept’s regimental colours mounted high on the walls, some dating from the first World War, others from the mid-19th century and which are disintegrating.

Other panels deal with the morality of war and the role of chaplains; the history, sometimes fraught, of St Patrick’s and war remembrance (a section recalling president Mary Robinson’s attendance at the 1991 Armistice Day service is headed “into the light”); and Ireland’s Memorial Records 1914-1918, the Harry Clarke-illustrated volumes containing a list, which is incomplete, of the Irish war dead.

One of eight volumes owned by the cathedral is on display, a page turned each day, but visitors can also examine a full digital copy of the record.

The setting of the tree in the north transept is appropriate because of its association with military memory.

Three of the four lower stained glass windows are associated with war: one is a memorial to a Donnybrook family who lost two sons and a son-in-law in the first World War. Another showing King Cormac of Cashel commemorates the role of the Royal Irish Regiment in South Africa in 1899-1902. The third commemorates the role of the same regiment in 1855-1856 in the Crimean War.

Brangwyn, who designed first World War posters, used faces from one, showing civilians fleeing the war, in the windows designed for St Patrick’s.

In the centre of all this is the new tree of remembrance.

“The idea with our tree was to create an inversion of the tree of life – the fact that it is completely bare and war-torn,” says Smith.

“It is a bit like the poppy which flourished amid the debris of war. The tree has survived war and over the course of the four years, it will bring a message of hope and peace.”

The public gained access to the tree last Tuesday. By Wednesday afternoon, it was festooned with hundreds of leaf-shaped pieces of paper tied on by visitors. The cathedral has printed 10,000 such leaves and visitors are invited to leave a message of remembrance of someone gone and who was of importance to them.Smith expects that soon the tree will be a covered by a “huge wall of uplifting messages of hope and peace”.

The tree and the Lives Remembered project will be opened officially this evening by writer Jennifer Johnston. Entry is by invitation only. See stpatrickscathedral.ie/ Lives-Remembered.aspx