Retracing the paths of the pilgrims 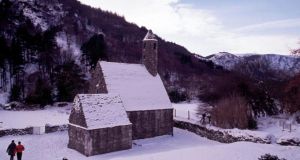 Glendalough: “Next Easter there is an opportunity for the people of Ireland to heed the age-old siren call of our ancient paths and reconnect with our common Christian heritage.” Photograph: Fáilte Ireland

Last summer, in this column, I recounted a penitential journey I completed from Slemish Mountain to Skellig Michael when researching my book, Pilgrim Paths in Ireland. In conclusion I wrote: “So on a rainy day, as I crossed the Sheehy Mountains on the sublimely redeveloped St Finbarr’s Pilgrim Path, it struck me that the time is surely right to bring our ancient pilgrim paths back into the nation’s consciousness. What about a designated National Pilgrim Paths Day aimed at acknowledging our shared Christian heritage as a unifying occasion for Irish people and overseas visitors alike?”

The reaction to this question was such a positive “yes” from readers, I decided not to wait – Irish-style – for someone else to do the heavy lifting. Instead I, rashly perhaps, decided to try and get things moving myself. Broaching the idea for a National Pilgrim Paths Day with Isabel Cambie, rural development manager for South Tipperary and rural recreation officer John Egan, I was immediately bolstered by their enthusiasm. We invited the representatives of St Declan’s Pilgrim Way, which straddles Tipperary and Waterford and also North Tipperary’s Kilcommon Pilgrim Loop, to a preliminary meeting. Both groups immediately committed to the idea and agreed that the inaugural event would take place on Easter Saturday, April 19th, 2014.

Urgings to go national followed and so, with some trepidation, I contacted those community groups working closely with Ireland’s principal medieval pilgrim paths and invited them to a meeting. North Tipperary Leader Partnership agreed to host this, even though I wasn’t certain anybody would show up. In the event, pilgrim groups from across Ireland poured in, with those travelling from Donegal making the longest journey.

Then began the task of teasing out the vision for National Pilgrim Paths Day. Everybody agreed that NPP day should be non-denominational and welcome people of all religious backgrounds and equally those without religious affiliations. The idea of a unifying event was seen as central with the emphasis on exploring Ireland’s pre-Reformation Christian heritage and facilitating a deeper understanding of our island’s common history.

At our second meeting in September, it was agreed the pilgrim walks would take place exclusively on medieval penitential paths with a strong spiritual and historic resonance that offered a sense of reaching into the past. Each pilgrimage would be aimed at delivering a special sense of occasion for participants while endeavouring to create an economic footprint in the surrounding area. Renewal or giving thanks in a spiritual, but not religious sense, would be encouraged as part of an event that would be driven by the voluntary efforts of the sponsoring community groups in each area. Finally, a dedicated social media platform highlighting the event was seen as essential.

So far so imaginative, but then came the tricky business of putting the event in place. Sharon Hearty, communications officer with St Patrick’s Purgatory, Lough Derg, took on the task of designing the website. Beatrice Kelly of the Heritage Council provided a professional logo that beautifully encapsulated the medieval pilgrim experience. Diarmaid Conden from Knockmealdown Active, who had already worked with last year’s successful St Declan’s Way pilgrimage, was given the task of building the website.

Four months on and due to their efforts and those of many others, things are now almost in place for Ireland’s first National Pilgrim Paths Day. So next Easter there is an opportunity for the people of Ireland to heed the age-old siren call of our ancient paths and reconnect with our common Christian heritage.

Perhaps, some of Ireland’s 4,000 pilgrims who received a compostella for walking the Camino of St James will now take this opportunity to experience a mystical journey in Ireland. Others, intent on preparing for the Camino, following in the footsteps of their forefathers, or just trying something new by traversing a sacred trail, won’t be short of choice on Pilgrim Paths Day. Walks will take place on the “Pilgrim 10”, which includes all of Ireland’s foremost penitential paths. These are located in Donegal, Offaly, Wicklow, North Tipperary, Mayo, Waterford, South Tipperary, Clare and Kerry. There is also a two-day along St Finbarr’s Path in Cork that finishes, most appropriately, in glorious Gougane Barra on Easter Sunday. Further information on the “Pilgrim 10” is at pilgrimpath.ie