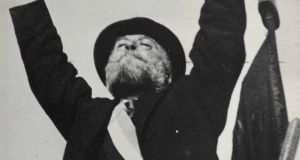 For more than a decade, Jean Jaurès observed the rise of nationalism and territorial and military rivalry between great powers. No one was more lucid than the French parliamentarian, founder of the Socialist Party and newspaper editor regarding the probability of war and its terrible consequences. No one did more to try to stop it.

Before the Socialist International in Basel in November 1912, Jaurès warned of “the monster looming on the horizon.” Addressing tens of thousands of socialists, he quoted the 18th century German poet and philosopher Friedrich Schiller: “I call on the living. . . I weep for the dead. . . I shall break the thunder of war that threatens from the clouds.”

In 1913, he failed to prevent the extension of conscription from two to three years. In the last week of his life – the last week of peace in Europe – Jaurès described a continent “teetering on the brink of the abyss”. Two days before his death, he brainstormed with other socialist leaders including Keir Hardie and Rosa Luxemburg in Brussels.

The socialists thought that an international workers’ strike would make it impossible for governments to go to war. But they set aside plans for a general strike in the hope that French and German socialists could persuade their governments to prevent their Russian and Austrian allies from mobilising.

Jaurès spent the last day of his life at the French foreign ministry and the National Assembly, lobbying for peace. He returned to the office of L’Humanité, the newspaper he’d founded in 1904, with the intention of writing a plea for reason which he envisioned as the equivalent of Zola’s J’accuse.

Before setting to work, Jaurès met colleagues for dinner in the Café du Croissant in the rue Montmartre. Raoul Villain, a student who belonged to a pro-war, nationalist movement, shot him twice through the open café window. Jaurès’s only son, Paul, would be killed in Normandy at the age of 18.

A brilliant orator, university professor, historian of the revolution and journalist between stints in parliament, Jaurès had denounced the French army’s lies during the Dreyfus affair. He co-founded the French Socialist Party in 1902, and helped draft the law on separation of church and state.

Generations of French people have asked, as Jacques Brel sang plaintively, Pourquoi ont-ils tué Jaurès? The French left moved his remains to the Pantheon in 1924. He remains their iconic martyr. The right, too, now praise him as a great Frenchman.

Jaurès said he would accept war only if it were necessary to defend the territorial integrity of France. His fellow socialists rallied to the “sacred union”. “They assassinated Jaurès. We won’t let them assassinate France,” declared a headline in a left-wing newspaper.