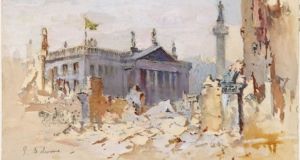 The problem of recruiting in rural Ireland was addressed at a meeting in Dublin at which many views were elicited as to how to improve the rates of enlistment.

It was found that recruitment levels were good in garrison towns because the military had a very visual presence and there was a good mix between civilian and the military.

This contrasted with the countryside where there was no visual presence and recruitment was poor. “In many country districts the people had rarely seen a soldier and had no means of knowing what life in the Army was like,” a James Brady suggested. He felt that if even small bodies of men were sent out on route marches in various districts, the effects on recruiting would be beneficial. After much discussion, the following resolution was passed.

“That this committee consider it would be of considerable advantage to recruiting in the county and city of Dublin if the military authorities could arrange for route marches throughout the district, accompanied by a band and by a certain number of men fully equipped. This detachment should visit the various outlyinging towns . . . , holding meetings and encamping for one or two nights in accordance with requirements. This the committee believe would give publicity to the recruiting campaign and, at the same time, be a means of training the men who had enlisted in the pitching of camps and other necessary work.”

A letter writer to The Irish Times believed he knew the reasons why recruitment in Connacht had been so poor. Yenrut pointed out that the wages paid by the Congested Districts Board were almost double that of a soldier’s pay. “These young men are at present employed in preparing farmers for tenants of the CDB and from your issue of March 1st we see that the same body cannot reduce its expenditure during this terrible time of strain. But it can go on employing men of military age to make cosy farms for the most highly spood-fed community in Europe while the whole Empire is sacrificing life and limb to keep the old flag flying. What are the farmers doing in return?”

2016 The remarkable story of the ducks in St Stephen’s Green has been revealed by the DSPCA as part of the centenary commemorations in 1916. The green saw heavy fighting when British soldiers swept the park with gunfire from the rooftops. The fighting only ceased for park-keeper James Kearney to enter and feed the ducks. The Times History of the War recorded the green “was well stocked with waterfowl, and the keeper, who remained inside all the time, reported that his charges were well looked after and fed by him, and were very little perturbed by the bullets flying over their heads”.