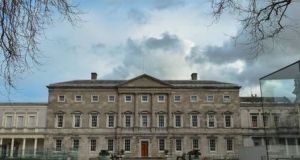 Leinster house. The proposal to relocate Senators during works caused controversy last year when it was publicly criticised by a former director of the museum, Pat Wallace, who said staff were “weeping” at the prospect

Plans for the refurbishment of Leinster House, and the temporary relocation of the Seanad to the neighbouring National Museum of Ireland–Archaeology, have been approved by Dublin City Council.

The Office of Public Works made two separate planning applications, one for the internal and external restoration of the Georgian building, and a second to permit the use of the museum for Seanad sittings during the work, which is expected to continue until the end of next year.

The proposal to relocate the Senators during the works caused controversy last year when it was publicly criticised by a former director of the museum, Pat Wallace, who said staff were “weeping” at the prospect.

The conservation and restoration work to the 1745 Leinster House building would include rewiring, structural strengthening and fire-compartmentation works, repairs to internal joinery, plasterwork and floors, some internal reconfiguration and redecoration throughout.

External work will also be undertaken, including modifications to ramps and paving to improve accessibility, stone repair and cleaning works to elevations, and roof repairs .

While a final cost for the work has yet to be determined, the OPW last December said it would be at least €8 million.

Heritage body An Taisce had raised concerns about the fire escape and access corridor provisions in the application. The council has recommended that a conservation architect be employed to manage, monitor and implement the works on site “and to ensure adequate protection of the historic fabric during the works”.

The proposal to relocate the Seanad to the museum had previously involved cutting through the walls of the building to create entrances and the attachment of a lift to the facade of the museum.

However, the discovery late last year of a “secret door” directly connecting Leinster House to the museum, which had been boarded up in the 1920s, has meant this level of intervention will not be necessary.

The OPW said all works would be reversed and removed on completion of the conservation and restoration of Leinster House.

Billy Hutchinson: ‘I justify everything I did in the Troubles. To stay sane, I have to’
Real news has value SUBSCRIBE