An Irishwoman’s Diary on what schoolchildren were once taught 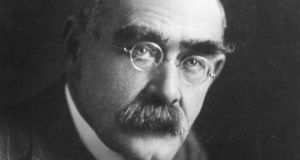 Rudyard Kipling: “So Ireland never went to school and has been a spoilt child ever since; the most charming of children, indeed, full of beautiful laughter and tender tears, full of poetry and valour, but incapable of ruling herself, and impatient of all rule by others.”

It’s a shocking shame the Romans never conquered Ireland. Especially shocking to Rudyard Kipling and CRL Fletcher, the authors of A School History of England, the bestselling textbook for the youngsters of 1911.

I wonder if this was read by many in the national schools where most Irish children got their education. It might have made their appreciation of their country a little nuanced.

Fletcher and Kipling confided that it was “a misfortune for Britain that Rome never conquered the whole island. The great warrior Agricola did, between AD 79 and 85, penetrate far into Scotland; but he could leave no traces of civilisation behind him, and Ireland he never touched at all.

“So Ireland never went to school and has been a spoilt child ever since; the most charming of children, indeed, full of beautiful laughter and tender tears, full of poetry and valour, but incapable of ruling herself, and impatient of all rule by others.”

Kipling and Fletcher are quite certain that British rule is best for the colonials. “Soon after Victoria became Queen a cry for ‘self-government’ began to be heard from the Colonies,” they tut. “There were five-and-forty British Colonies all told, and the joke went around that they were governed by three-and-twenty clerks of the ‘Colonial Office’ in Downing Street, London. This was not quite true, as most of our colonies had little councils of their own, which in some cases were even elected.”

How wise was this, though? Surely Mother England knew best? In the Caribbean, after all, lived “a large population, mainly black, descended from slaves imported in previous centuries, or of mixed black and white race; lazy, vicious and incapable of any serious improvement, or of work except under compulsion. In such a climate a few bananas will sustain the life of a negro quite sufficiently; why should he work to get more than this? He is quite happy and quite useless, and spends any extra wages which he may earn on finery.”

The authors’ great fear, in those years lit by the dazzling foredawn of the coming “War to End All Wars”, was Home Rule. “With the exception of those from Ulster, the Irish members of the House of Commons since the Union of 1800 have never been loyal to our system of government, but have continually cried out for a separate Parliament in Dublin”, they tell their child readership.

“The first great agitator for this purpose was the orator Daniel O’Connell, in the reigns of George IV and William IV and at the beginning of Victoria’s reign. He has been followed by many others, notably by Mr Parnell, and the agitation is still continuing. In order to hush this cry, British statesmen have allowed Ireland to have many more members of the House of Commons than the population of that island warrants.

“More than one statesman, especially the famous Mr Gladstone in 1885 and 1892, has thought of conciliating the Irish, by granting them, under the name of ‘Home Rule’, the separate Parliament which they demand. But most people fear that a separate Irish Parliament would be followed by a complete separation between Ireland and Great Britain, by the establishment of an Irish Republic, and by the oppression of the well-to-do and intelligent classes of Irishmen, who are certainly loyal to the British Crown.”

And for why! “All British politicians, on both sides, have, during the last seventy years, made haste to remove every real, and indeed, every imaginary grievance of the Irish people, though they have earned no gratitude by doing so.”

My copy, bought in Kilkenny, is inscribed in a rounded child’s handwriting “Irene Taylor, Form III”. I wonder if the 10-year-old Irene Taylor in the 1911 census living in Aghantaraghan,Poyntz Pass, Armagh, is my Irene.

Towards the close of the book comes a tragic sentence. Referring to “the one European war which we fought in the nineteenth century” – the Crimean War – Kipling and Fletcher tell their child readers that “the only safe thing for all of us who love our country is to learn soldiering at once, and to be prepared to fight at any moment”.