Department of Heritage appeals for information on theft at national monument 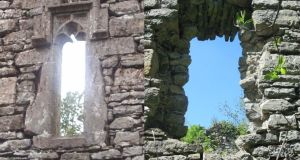 Before and after photograph of the stolen carved limestone window at Church Island, Lake Garadice, Co Leitrim. Photographs: Department of Heritage

The removal of a 15th century stone window from a protected Co Leitrim church is being investigated by gardaí.

The carved stone window-frame was taken from the Medieval national monument on Church Island, Lake Garadice. The lake is located on the outskirts of Ballinamore. An outer facing stone was stolen from the tower of a defensive wall (bawn) on another island on the lake, called Crane Island (known also as Slasher’s Island).

Damage to both the church and the bawn have been inspected by archeologists from the National Monuments Service. Both structures are protected national monuments. The theft was reported on Monday to the Department of Arts , Heritage and the Gaeltacht which referred the matter to the Garda.

The window is a “significant part” of the church structure where conservation works have been undertaken in recent years , the Department said in a statement.

Minister for Heritage Jimmy Deenihan said he was was “shocked by the damage and destruction” and has condemned the removal of the items.

Mr Deenihan urged the public to assist in protecting national monuments, many of which are in “some of the most remote parts of the country”.

He called on anyone with information on the thefts to contact the Garda in Carrick-on-Shannon on 071-9620021 or the National Monuments Service at nationalmonuments@ahg.gov.ie or 01-8882169.

Level 5 lockdown TV: From The Crown to Dead Still, the ultimate guide to what to watch
4