Mea culpa: Why I love Latin

Latin is going out of fashion in Irish classrooms. And that is sad 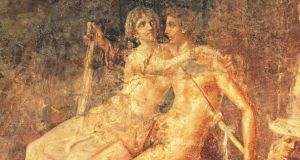 Translation: My woman says that she’d rather marry no one than me - not if Jupiter himself asked her.

She says: but what a woman says to her eager lover you should write on the wind and running water.

Latin poet Catullus was a racy guy. Substitute Jupiter for Poldark, and his cheeky verse leapfrogs right up to date.

Catullus lived the phrase “everything is copy” before it was even a twinkle in US journalist’s Nora Ephron’s eye, preferring to lean on his personal life as inspiration for his poetry, rather than the more traditional slew of classical heroes favoured by his peers.

He crammed a lot of verse in while he lived, from 84-54 BC, and the dead poet has breathed life into many a classroom since. However, figures published in The Irish Times on Tuesday show that only 104 lucky students will get the chance of reading Mr Racy in an Irish classroom this year.

Latin is going out of fashion. And that is sad.

The highlight of my school days was provided by my Latin teacher, who set us the task of writing our own version of the Catullus poem featured above. I still remember my effort, which he strangely left till last and cut off as I reached the climax.

There once was a man called Catullus

Whose sex life is sure not to dull us

Lesbia wrote in the wind

About how they both sinned

And the incredible size of his phallus

I can’t remember if I got an A for that. I suspect not.

Latin can teach you so much, digging deep foundations for any language you speak or plan to learn. The Finns, Hungarians, Basques and Estonians can look away now, for they have nothing to see here as they have chosen to go it alone - linguistically at least.

To understand Latin, you must acquaint yourself with grammar, and years of learning declensions will make sure you never forget it. Jim O’Dea, a Latin teacher at Rathdown school in Glenageary told the Irish Times “over 60 per cent of English derives from Greek and Latin, with words in the medical, scientific and legal spheres”.

He also said that Latin tested “focus, concentration, attention to detail”. It certainly did all those things in my class – until we lost focus and concentration while paying attention to the sexy detail in Catullus.

What the Romans actually did for me – and the same can also be true in Irish classrooms today – is level the playing field with other people who capitalise on the superiority of a classical education in the formation of modern man. British foreign secretary Alexander Boris de Pfeffel Johnson, an Eton alumnus who studied classics at Balliol College, Oxford, saunters into mind.

Other former students of Latin are an eclectic bunch. Lead singer of Coldplay Chris Martin graduated with first-class honours in Greek and Latin from University College London.

Before she graduated toward the world of science, Susan Greenfield, the British scientist famous for her research on the treatment of Parkinson’s disease and Alzheimer’s disease took an A level in Latin.

And if this doesn’t attract you to Latin, you have a heart of stone: the Night Manager himself, actor Tom Hiddleston, got a double first in classics from Cambridge.

QED, as they say in Latin.

And to the naysayers, who think we have nothing more to learn from the people who gave us roads and central heating, we give you Ted Turner.

In 1957, aged 18, the future billionaire and founder of US television channel CNN, informed his father that he would be majoring in classics at Brown University. Pater was not amused, sending his son the following epistle:

“I am appalled, even horrified, that you have adopted Classics as a major. As a matter of fact, I almost puked on the way home today. I suppose that I am old-fashioned enough to believe that the purpose of an education is to enable one to develop a community of interest with his fellow men, to learn to know them, and to learn how to get along with them. In order to do this, of course, he must learn what motivates them, and how to impel them to be pleased with his objectives and desires.

“These subjects might give you a community of interest with an isolated few impractical dreamers, and a select group of college professors. God forbid!

“There is no question but this type of useless information will distinguish you, set you apart from the doers of the world.

“You are in the hands of the Philistines, and dammit, I sent you there. I am sorry.

Luckily Ted was fully versed in the power of the media and sent the letter to his college paper. Now, it looks like all the Latin Turner leaned at college actually taught him rather a lot.

Latin may be a dead language. Well it was dead to the 58,363 students who didn’t take it in last year’s Leaving Certificate anyway. But as Latin is meant to be read not spoken, it frees us all from the adolescent nightmare of pronunciation and speaking out loud. It is a language that will never make you blush – unless Catullus is steering the ship, of course.

And as the centuries move us in and out of different censorious times, let us remember the good times.

Latin literature doesn’t need to spell everything out; it is happy to leave quite a lot to your imagination. But when it does call a spade a spade, it is glorious. Every adolsescent should get a crack at Ovid’s Art of Love. It’s better than physics.

‘There’s no justice in this’: Inside the new Netflix series on Jeffrey Epstein
6 The 20th century belongs to America
7