Jostling for their place in the rise to rebellion 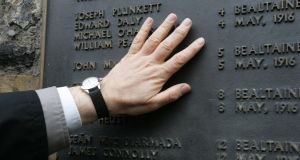 A plaque commemorating the 1916 leaders who were executed in Kilmainham Gaol. Photograph: Frank Miller

Those of us in the commemoration business, be it in respect of the Rising or of the broader decade of revolution that was 1912-22, don’t even attempt to be definitive about our history. We are not in the business of honing a single national narrative.

The process of commemoration this time round is a dialogue as much as anything. It is about recognising and embracing the different strands of what makes us what we are today, and how they were woven together. Nationalism, republicanism, labour, the women’s movement and, yes, the home rule movement, those who went to fight on the Somme, unionism . . .

In this ninth issue of The Irish Times’ “Century” series, we look at one of those strands: the militants of the Irish Republican Brotherhood and, specifically, their leadership, the military council who led the Rising in the full expectation they would not succeed and would sacrifice their lives in the process. There was the seven who would sign the Proclamation and then face execution, and those who would share their fate .

Meeting his friend Edward Martyn for one final time, Tom MacDonagh explained his belief that Ireland would change forever due to the Volunteers. Almost prophetically, Martyn warned him: “Remember, dear boy, you’ll be shot.”

Even here, however, we don’t have one harmonious narrative. Was Patrick Pearse, the reader of the Proclamation and assumed to have been chosen president of the republic it declared, the real leader of the Rising? Or was it Thomas Clarke, the veteran revolutionary, whose signature at the top of the list, his late widow insisted, was an acknowledgment by the other six that he was primus inter pares? Of Clarke, Fenian John Devoy declared that “but for him there would have been no IRB left in Ireland and no fight in 1916”.

And Kathleen Clarke said of Sean MacDiarmada: “As a worker he was head and shoulders above PH Pearse, but not being a writer is not known to the people of Ireland”.

How much of the Proclamation was Connolly’s vision and how much was Pearse’s?

The profiles in this supplement of the men who led the Rising and of those who followed them to the execution yard necessarily reflect the different contemporary perspectives of the authors, some writing about their relatives. Diversity is the hallmark of this commemoration. That is to the credit of Ireland 2016, which generously helped make this supplement possible. Still, buyer beware – there are truths and truths.

In bringing you the latest perspectives on the signatories, we have also illustrated the supplement with the fine portraits that made up much of Mick O’Dea’s recent exhibition in the Royal Hibernian Academy (courtesy of the artist and Kevin Kavanagh Gallery, Dublin).

By way of contrast, John Horgan provides a look at the very different 1916 perspectives on the Rising from the media of the time, including this paper’s own distinctly hostile narrative. But then, this time we are, after all, embracing all of our narratives.